The Tronsmart Apollo Q10 is a budget-friendly pair of headphones that promises to use the ANC technology in a similar manner to the Sony WH-1000XM4 and Bose 700 in order to cancel the external noise and, by doing so, to maintain the quality of the music without needing to raise the volume.

There really isn’t a shortage of these type of headphones on the market, as I have seen other devices in the same price bracket (50ish USD), such as the OneOdio A30 or the SuperEQ S1 trying to accomplish the same feat. But what’s interesting about the Tronsmart Apollo Q10 is that it has 5 microphones to help detect (and cancel) the outside noise and that it seems to share the same hardware with a much more expensive pair of headphones, the Rolfstone Focus. The similarities go so far that you can actually pair the Tronsmart app to the Rolfstone Focus. The sound quality tuning will make the difference, but it’s still interesting to see the way the audio hardware industry gets weirder by the day.

As I already hinted, there is an app that you can use with the Tronsmart Apollo Q10 to adjust the sound EQ which is fairly uncommon at this price point and it seems that the headphones come with a very large battery. Indeed, the 1200mAh battery is advertised to be able to offer up to 100 hours of play time (I assume that with ANC off). Furthermore, in many ways (including the build quality), the Tronsmart Apollo Q10 do remind me of the Sony WH-1000XM3, so let’s put these promising headphones to the test.

As I already mention, don’t be surprised when you put the Rolfstone Focus next to the Tronsmart Apollo Q10 because save for a few logos here and there, they are pretty much identical in almost every respect (the Apollo Q10 seems to have an additional microphone). But, I also found that they have a similar look to the Sony WH-1000XM3 and yes, I have criticized the build quality of the Sony headphones, but not the design which is alright for a pair of 300+ USD. The Tronsmart Apollo Q10 did go for a pretty much full plastic build, including the sliders (which are usually metallic) and the entire device is covered by a black finish (glossy at the top of the headband and the rest is matte black).

The headband does have a fairly thick cushion which works well since I felt no pressure at the top of my head, but that usually means that the earcups will push on the jaw. And they do, although far less than the OneOdio Monitor 60. I was able to adjust them in a manner as the pressure was ‘evenly distributed between’ the jaw and at the top of my head, but I still had to take a break after about an hour and a half of listening to music. The Sony is a bit better in this regard (as it should considering the price tag), but the most comfortable pair of headphones that I used so far were the AKG K240 which don’t cost that much over the Tronsmart Apollo Q10.

There is a fair amount of room for adjusting the headphones – the earcups can move 90 degrees, they can fold for an easier carrying and the headband can be stretched quite a bit without hearing any creaks. The sliders can help fit on people with a larger head, but I noticed that the movement isn’t that smooth (the sliders can get stuck if you try to adjust them while the headphones are on your head). Overall, the plastic still feels similar to the WH-1000XM3, so be aware that daily use may put a heavy toll on the arms of the Apollo Q10. The earcups are a bit narrow than on other headphones, the same as the cushions which have a narrower space for the ears. 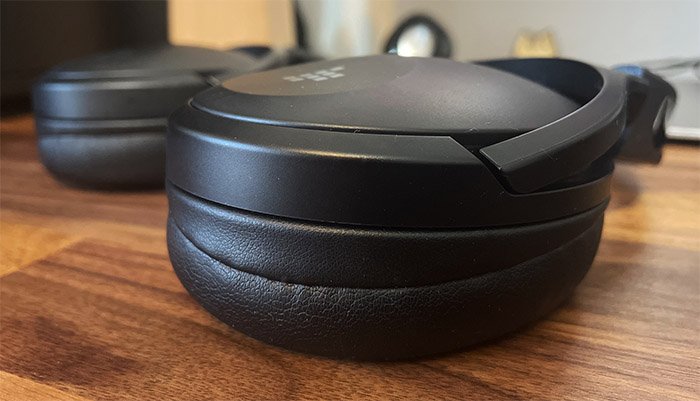 Still, they feel comfortable enough to justify the price tag. If you intend to workout with these headphones, you will sweat quite a lot since the cushions don’t really allow any breathing. I noticed that there are no 3.5mm or 6.35mm jacks on either earcups and that’s because the Tronsmart Apollo Q10 was designed to be a wireless-only pair of headphones. There are a few buttons though, such as the Power button positioned a bit awkwardly on the right earcup next to the status LED (double click the button to put the headphones in pairing mode). Still on the right earcup, there’s a USB-C port for charging the inner battery.

One of the reasons why the Tronsmart Apollo Q10 reminded me of the Sony WH-1000XM4 was the two large microphones positioned on the outer side of the earcups and, if it works in a similar manner, we may see an excellent ANC performance at a far lower price tag than the Sony’s. As anticipated the rest of controls are on the outer side of the right earcup – the circular place with the logo is a touch-sensitive area. To switch between the ANC mode On, Off and the Ambient mode, just touch and hold a finger on the dedicated area; to Play/Pause a track double tap the controls area and to raise or lower the volume, simply slide up or down. To move to the next track, swipe forward and to return to a previous track, slide your finger backwards (again, the controls are very similar to the Sony WH-1000XM3, which is excellent, since they worked really well and were intuitive).

The Tronsmart Apollo Q10 is equipped with 40mm drivers, which was expected and the impedance is 32 Ohm which again, doesn’t surprise and it means that you can connect the headphones to pretty much any media source available (they’re easy to drive). In order to connect to a smartphone (yes, one at a time), the Tronsmart Apollo Q10 makes use of Bluetooth 5.0 and this ensures a fairly wide coverage (up to 30 feet with a couple of thick walls in between), but, in terms of codecs, there is only support for SBC and AAC (as confirmed by a Pixel 2 XL). I would have liked to see the Bluetooth multipoint function being enabled, but it’s apparently a difficult technology to master since I have barely seen it on some expensive devices and not at all on budget-friendly headphones.