The TaoTronics SoundLiberty 80 (also known as TT-BH080) are a pair of true wireless earbuds that closely follow in the footsteps of Apple’s AirPods, which means that they strayed quite a bit from the usual design formula (the pea-shaped earbuds with various aesthetic changes between models).

I know that some brands have unashamedly copied the AirPods, but the TaoTronics SoundLiberty 80 are a bit more subtle (well, kind of) by making the body of the earbuds longer and adding a gradient finish to the side. This way, they manage to look a bit more unique and closer to the traditional wired earbuds (those that didn’t have any silicone tips), but the charging case is still almost identical to that of the AirPods. Of course, the price tag is going to be far more accessible and TaoTronics has added some goodies, such as the support for aptX and AAC, the in-ear detection (something that you don’t see on budget-friendly TWS earbuds), quick charging and the AI noise reduction tech for a better call quality. 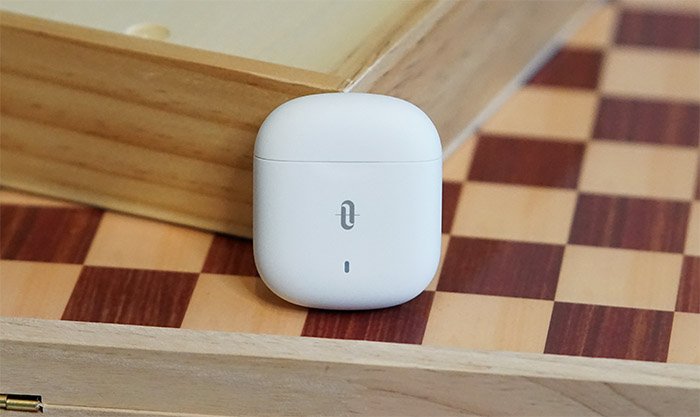 So overall, they’re an attractive package for those that prefer the form factor of these true wireless earbuds. That being said, there is clearly a market for these Apple AirPods look-alike and people apparently fell in love with the gradient finish, so TaoTronics seems to be right on the money with these TWS earbuds. But are they actually good? Let’s check them out.

Although not the first to create a true wireless pair of earbuds, the Apple Airpods were, are and most likely will remain for a long time the most popular TWS earbuds on the market and it’s not only because of their excellent marketing (probably one of the most efficient in the world), it’s also because they had a recognizable shape (very similar to the traditional-looking wired earbuds) and a good sound reproduction. As expected, some manufacturer were inspired by Apple’s design and, while TaoTronics has developed some unique looking devices, it has taken some inspiration from the AirPods with its SoundLiberty 92 and 95. 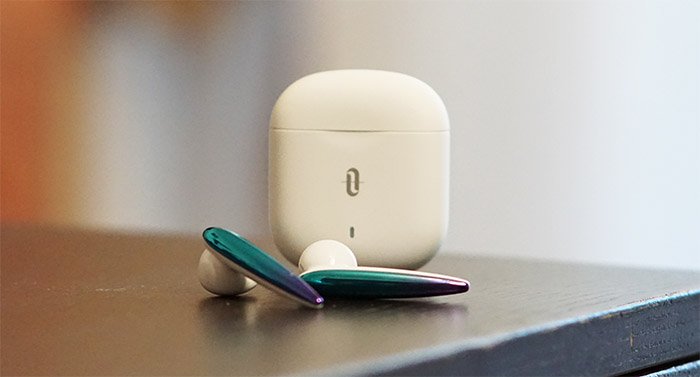 The SoundLiberty 80 seems to also share that Apple-esque look, but at a closer inspection, there are some design elements that clearly sets them apart. Yes, the part that goes in your ear has the same shape, but the elongated section is not only aligned differently, but also quite a bit larger. One earbud measures 1.77 x 0.78 x 0.66 inches (4.5 x 2.0 x 1.7 cm) so they are clearly not the most compact, but even so, the TaoTronics SoundLiberty 80 do end up being some of the most comfortable TWS earbuds that I had the possibility to test. One of the reasons is because it’s incredibly lightweight (one earbud weighs only 0.15 ounces or 4.5 grams) and since they don’t go very deep in the ear, there’s no way to irritate the inner ear canal.

They may be comfortable to wear, but will they fall off easily? No, the TaoTronics SoundLiberty 80 have decent anchor points and will sit in your ear most of the time, but I would advise against wearing them while doing any outdoor sports since it’s possible to lose them (in this case, I do suggest using some earbuds with silicone hooks). Since the earbuds barely go into the ear’s inner canal, they’re not going to fare that well with outside noise, so the passive noise canceling was a bit neglected. Returning to the body of the earbuds, I saw that there are a couple of microphones on the pea-shaped part (or at least I assume they are since there was no mention of them in the user manual), while at the lower end of the elongated section, there is a larger mike along with two pin connectors (for connecting to the recharging case). 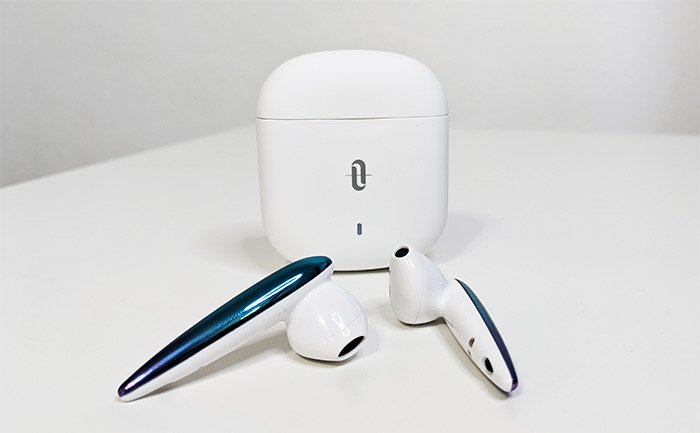 The other side of the earbuds that’s covered by the gradient finish is where you can control your earpieces by tapping or sliding on the touch-sensitive area (it covers the outer section almost to its entirety). So, to Play/Pause a track, tap twice on either earbud and to answer a phone call, tap once on either of the two earpieces (to reject a call, tap and hold your finger for two seconds on the preferred earbud). There is also volume control and you can increase the volume by sliding your finger up on the right earbud (or decrease it by sliding down on the same earbud), but since the Next/Previous track function is activated by sliding up/down on the left earbud, you’re going to mix them up a lot the first few times you’re going to use the SoundLiberty 80. Additionally, you can activate the voice control by tapping and holding on either earbud for two seconds and using ‘Hey TT’ to give it the desired commands. I do like that there is far more space to run your finger on since it reminds me of the Sony WH-1000XM3’s controls (even though it has a far larger touch-sensitive area).

It has almost become mandatory for the TWS earbuds to have some form of water protection (yes, even the entry-level ones) and the TaoTronics SoundLiberty 80 are indeed IPx8-rated. This means that you should be able to submerge your earbuds under water deeper than 3 feet for about 30 minutes, but I would advise against it since it’s more of an endorsement that the device is sweat-proof and will survive if you’re caught by the rain. While the earbuds are a bit large, the charging case is incredibly compact, measuring only 2.16 x 1.96 x 0.78 inches (5.5 x 5.0 x 2.0 cm) which means that it’s very easy to carry around and will definitely fit into any pocket. But let’s not ignore the elephant in the room since the case is almost identical to the Apple AirPods’ charging case. 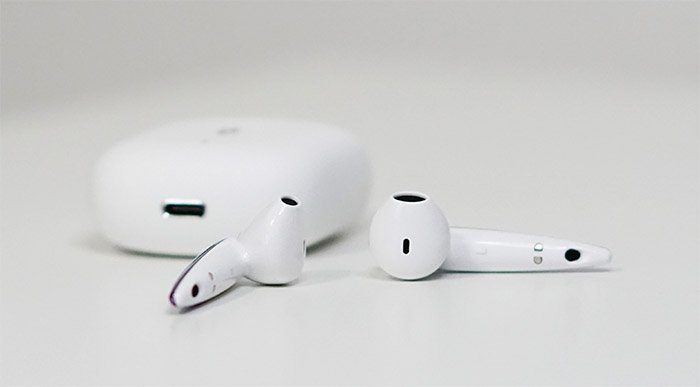 The finish is matte white (as opposed to the glossy finish from Apple’s case), but the shape, the metallic hinge, the reset button, it’s all there and it’s pretty much the same. I do like that there is a USB-C port for charging the case, but I am not entirely sure what to think about the single LED. It flashes when I’m charging the case and it lights up when I open the top section (which, by the way, is very smooth), but there is no way to know how much battery is left, so you should always charge the case when going outside (especially since, as you will see, the earbuds aren’t really champions when it comes to the single-charge battery life).

The TaoTronics didn’t disclose the type of driver that it has used on the SoundLiberty 80 (TT-BH080), but it does rely on the Qualcomm QCC3020 chipset to offer support for the aptX technology (which translates into far better audio, if you use the right type of files). I have seen this chip on the Wintory Air 2 and the Tronsmart Onyx Neo and they also share other features with the SoundLiberty 80, such as the support for Bluetooth 5.0 and AI noise reduction technology for better calls. The Bluetooth 5.0 will offer a larger bandwidth (allowing for the higher data transfer due to the aptX) and the coverage is advertised as being better, reaching up to 50 feet. In my test, the connection always cuts off after 30 feet, even if the earbuds rely on Bluetooth 4.0 or 5.1.

Besides the aptX codec, the SoundLiberty 80 also supports AAC and SBC which are a bit more common with the newer entry-level earbuds. That being said, to connect the TaoTronics SoundLiberty 80 to a mobile device, you need to enable the Bluetooth, check the pair of earbuds from the list of available devices and then tap to pair them. As you can see, my old Pixel 2 XL has detected that the earbuds support aptX, so, if I have a proper song file, it will definitely sound far better than anything I would get from YouTube (Spotify ftw!). 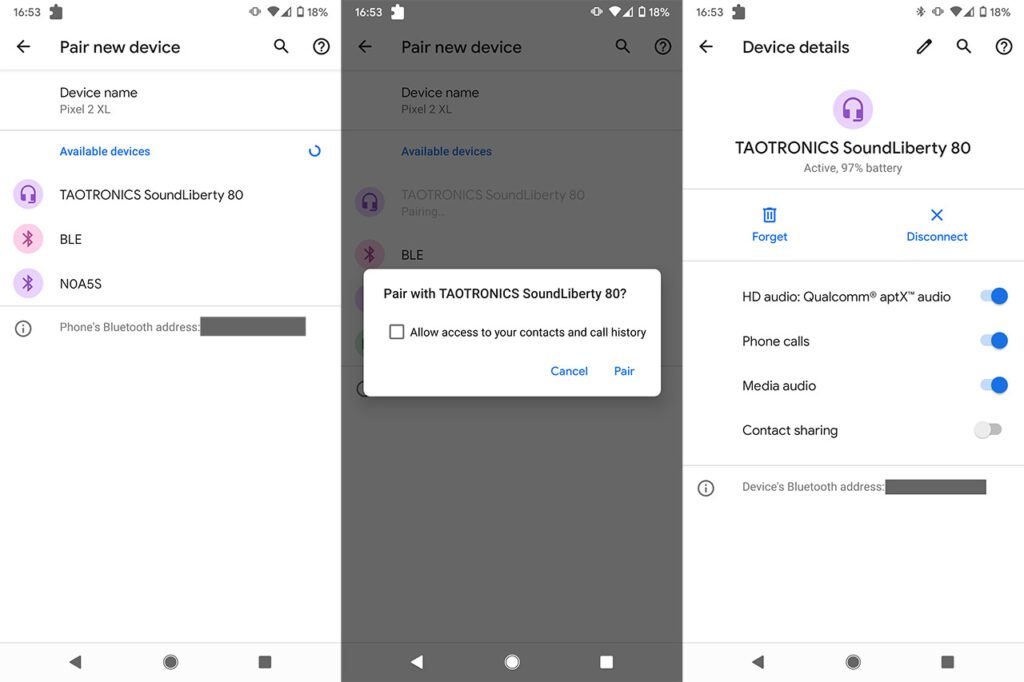 In order to check the sound quality, I listened to some songs, as well as some more technical audio files and I can say that the driver quality is good (there was no perceptible buzz), while the binaural test shows a decent soundstage. Sure, it’s not really impressive, but there was decent instrument separation and the location of the singers and the instruments wasn’t really vague (as it was with the Coumi ANC-860). At the same time it does have one element in common with the aforementioned ANC-860 and that’s the almost complete lack of passive isolation. The Coumi earbuds did manage to cancel out some external noise with ANC, but the TaoTronics SoundLiberty 80 seem to have zero noise isolation since I could hear everything that was going on outside while I was listening to music (if I was in a coffee shop, I did need to increase the volume). While listening to some songs, I noticed that while I wouldn’t call it flat, the bass does not go as deep as I would have liked (it definitely tries, but that lack of sound isolation doesn’t help at all). The mids are very clean, with the instruments and voices clearly defined (I would say that this is where these earbuds excel the most), while the highs were good and quite bright, but it’s easy to get fatigued after a few treble-focused songs.

You’ll most likely answer a call using the earbuds if you’re wearing them, so I went ahead and checked the call quality. And it’s fine for the most part. I could hear the caller decently well if I was at home or if the environment wasn’t very noisy, but again, that lack of passive noise isolation will get in the way. The great news is that the AI noise reduction tech (that I also saw in action on the TaoTronics SoundLiberty 79) works really well, so the caller was able to hear my voice perfectly fine even if I was outdoors (and there was some noise). TaoTronics has also advertised a nifty feature and it’s about the ability to pause the song/video if you take one or both earbuds from your ears and then to resume after you’ve put them back on. And it worked every time, which is great for conserving the battery life.

Speaking of which, I have started to get accustomed to the 5-hour (or more) battery life of the latest budget-friendly TWS earbuds, but the TaoTronics SoundLiberty 80 are nowhere near this performance. The manufacturer says that they should last about 4 hours and 20 minutes on a single charge, but it goes to 0 way faster: I let a song go on a loop, while the volume was set a 70% and the battery died after only 2 hours and 5 minutes which is not good at all. You could reach close to 3 hours if you keep the volume below 50%, but these are compromises that aren’t acceptable even in this price range.

The TaoTronics SoundLiberty 80 does almost everything right and one thing wrong which can easily be a deal-breaker for most. The TWS earbuds are stylish, easy to carry, they feel very comfortable in ear (don’t irritate your ear canal at all) and it’s so easy to control the volume, switch the track, activate the voice assistant and more since the touch-sensitive area is larger than on most other earbuds. The sound reproduction was acceptable for the most part, very in line with what most would expect at this price point and the fact that they look so much like the Apple AirPods will definitely attract more attention. But I’m not entirely sure why they cut the corners with the battery, especially since this is one of the most important aspects of any TWS earbuds. That being said, if you’re fine with listening to music for about 2 hours and then needing to recharge the earbuds again, then they’re a great buy, otherwise, there are better options out there, even from TaoTronics themselves. 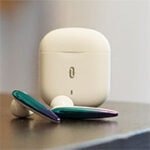