The OneOdio Monitor 80 are the manufacturer’s first entry into the open-back headphones market and they tried their best to fine tuned them, so the headphones would be suitable for mixing and DJ monitoring. The price tag suggests that we may be dealing with a somewhat entry-level pair of monitoring headphones, but then again, the AKG K240 cost less than $100 (at the moment of writing) and they’re still pretty good for mixing (lacking in bass, but otherwise great).

The OneOdio Monitor 80 use 40mm drivers and the impedance is 250Ohm which is quite high, suggesting that you cannot drive them with just any type of equipment. I had no issues driving the Monitor 80 with the default sound card on my main PC, as well as with a MacBook Pro, but a dedicated amplifier is probably for the best. The high impedance also suggests that OneOdio has gotten serious about designing professional gear and I know that the Monitor series had gained new members over the years, but the Monitor 80 just feel different. 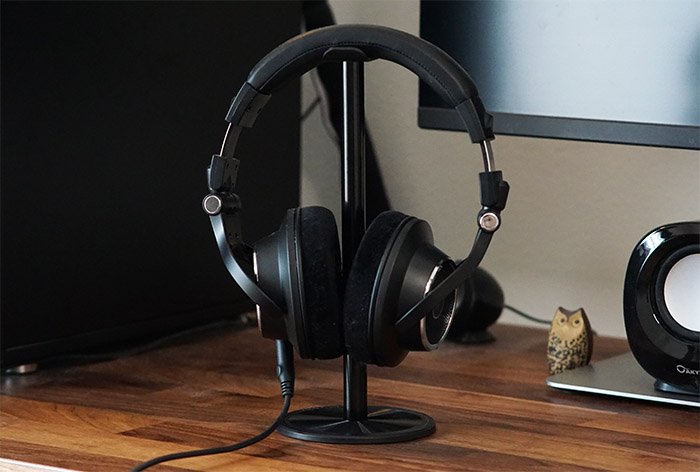 I have tested the OneOdio Monitor 60 a few months ago and they were alright, sporting two ports, a 3.5mm and a 6.35mm one. And it seems that the OneOdio 80 also went with the two dual ports approach, but the earcups will also not move around freely (as they did on the Monitor 60). So, to some extent, the manufacturer took a slightly different, perhaps more conservative approach and hopefully has managed to create a good pair of mixing headphones. Let’s to put them to the test and find out.

Like I already mentioned, the OneOdio has kept some design elements from the previous Monitor headphones, so, the 80 have a similar look and feel to the OneOdio Monitor 60. The size of the headphones is fairly large and plastic is still the main material that has been used, but I did notice that the rear side of the earcups is surrounded by a circular metallic ring and the grille doesn’t mimic an open-back design, no, the OneOdio Monitor 80 are actually open back which is excellent for the sound quality. But not so much for public use – then again, these headphones are designed for mixing and DJ-ing, so the sound bleeding out is not really a concern. 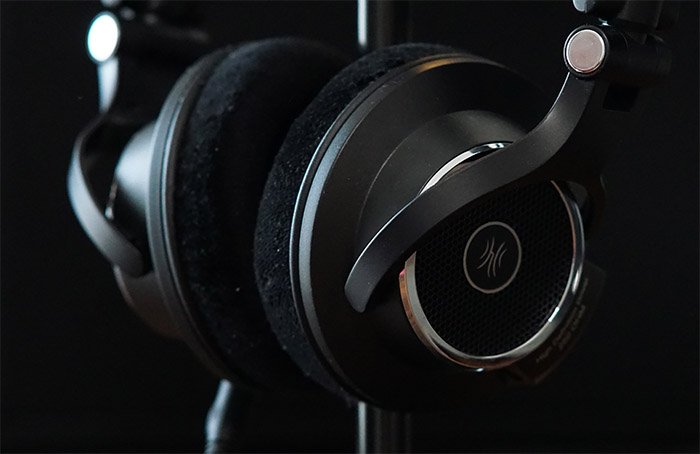 The slider is metallic and you can adjust the headphones without any resistance, and the earcups can swivel up to 180 degrees. One important change is that the bracket is smaller than on the Monitor 60, so the earcups won’t move around freely which can be seen as a good thing (or not, if you liked turning one around to listen to music from a single earcup). The clamp force on your ears is a little bit more with the OneOdio than with the AKG K240, but it’s still has far less of an impact than the Monitor 60 had. I have been able to keep the OneOdio Monitor 80 on my ears for three to four hours without experiencing any fatigue or annoying pressure points.

And one of the important factors that help achieve this comfortable experience are the velvet ear pads. They feel very soft and allow the ears to breathe far better than the fake leather alternatives. I did notice that when I moved the earcups, I could hear a squeak and I saw that the guys from basic-tutorials.com had noticed the same thing, so it’s a particularity to this model (a feature, not a bug). The 3.5mm jack on the left earcup, as well as the 6.35mm jack on the right earcup are also present and the reason is to allow the user to daisy-chain multiple headphones, so more users can listen to the same song (great while traveling with friends). 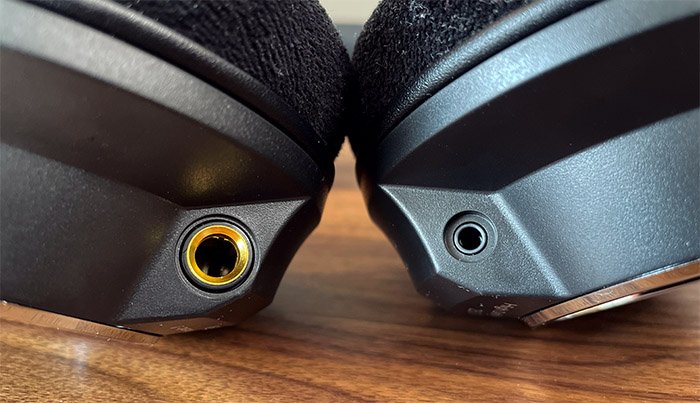 There are, of course, two types of cables in the package, allowing you to use whichever you prefer and I need to mention that the 6.35mm coiled cable is quite long (10 feet), so it can reach a distant audio source (again, good for DJs). The headband is very similar to what I saw on the OneOdio Monitor 60, which means that it’s fairly thick and soft, covered by a faux leather material. And it could have been a potential pressure point if the earcups were designed slightly differently, but they’re not. The OneOdio Monitor 80 remain comfortable to wear for a long time.

As you may have already guessed, there are no controls on the earcups and there is also no internal battery, so it will get its power from the audio source hardware, through the cable. The WiFi connection is also off the table (then again, Bluetooth is not that great with high fidelity headphones) and no ANC either (it would be weird to see open back headphones with ANC).

I found it curious that the OneOdio Monitor 80 is equipped with 40mm dynamic drivers, while the Monitor 60 had 50mm drivers, but that doesn’t really mean anything. What’s interesting is the far higher impedance, the Monitor 80 featuring 250 Ohm along with a sensitivity of 100dB +- 3dB. This means that the OneOdio Monitor 80 are fairly easy to drive with a lot of commonly available hardware (a bit more difficult with MP3s) and it also suggests that the professional equipment used by DJs and music mixers won’t blow up the speakers.

I have been able to drive the OneOdio Monitor 80 with a MacBook Pro, as well as a custom-built PC that uses a MSI MAG X570 Tomahawk. Even the manufacturer says that if you want the best sound quality, to use an amplifier, so follow that advice. I was wondering whether I could identify which type of driver OneOdio used, so I removed the ear pad (rotate it through the dedicated canal) and then I took out the small screws. But, as I saw on the Monitor 60, the OneOdio Monitor 80 components lack any markings or logos.

The OneOdio Monitor 80 headphones were designed for studio work, so they may not be that great for casual music listening. I am saying that for two reasons. First, you most likely need to have better hardware to properly drive them (an amplifier, although a MacBook will work as well – it worked for me) and then there’s the analytical sound which was fine tuned to be as flat as possible. That’s to allow professionals to not only understand better how a song was built, but to properly mix it as well. This means that using the OneOdio Monitor 80 should allow you to listen to a great amount of detail and nothing should be covered to improve the listening experience. 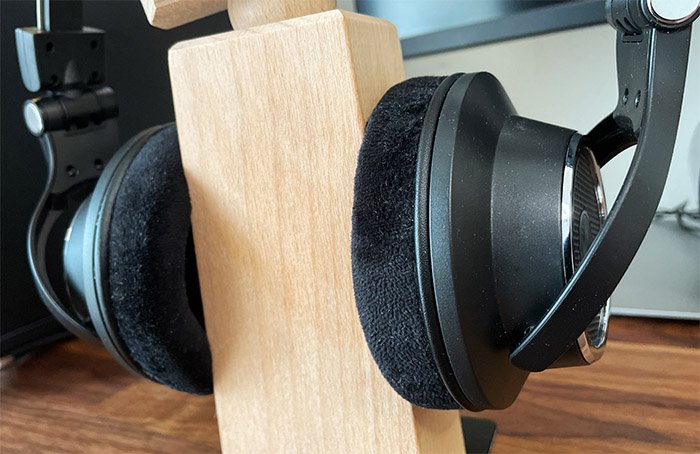 That being said, I started with a few more technical tests which analyze the way the drivers work. I let a sweeping tone run through various frequencies to check the quality of the drivers and, ideally, it should be clear with no buzz. The sound was indeed quite clean with only a faint buzzing at the very low frequency range. Next, I checked if the drivers were properly matched by running another sweeping tone and the good news is that the sound seemed to be positioned in the middle of my head, so all is well. Afterwards, I listened to a binaural song and it took me by surprise.
The sound is very detailed and I could hear everything, floor creaks when the singer moved slightly forward, the chair’s very faint squeak when the pianist moved while playing the piano and that’s something that I have heard with other songs as well (we’ll check more in a minute).

The sound stage isn’t incredibly wide, but it’s wider than on the Monitor 60 and, while I couldn’t say that I felt that I was given a private concert, it did seem like I was being moved right next to singer or the instrument (the focus would move from one subject to the other). The sound clarity is definitely impressive for a pair of headphones that retails at around $100, but I have noticed that the treble does seem a bit bright – again, I will have to check more with a larger variety of songs. Imaging is good as well since it wasn’t difficult to tell apart instruments, I could pinpoint the location of each singer and so on.

I have been using the AKG K240 Studio for a while now as my daily drivers and I decided to use them for a comparison with the OneOdio Monitor 80 (especially since they’re fairly close in terms of price). I usually start with some bass-focused songs, so I decided to listen to Faded by Zhu and the low bass is more prominent on the OneOdio Monitor 80 than on the AKG K240, even if it’s also open-back (so there is a very slight boost there).

I then moved to some System Of A Down and, listening to Mr Jack, I noticed that there was a detailed sound representation, the voices are slightly bit more forward than on the AKG K240, but it’s not unpleasant, quite the contrary, because the imaging seemed better on the Monitor 80. While listening to the song Spiders, I could hear some specific sounds that I missed with other headphones, but here, they were put a bit more in focus; also, the base, again, goes way deeper than the AKG K240 which felt far more satisfying. Listening to Déjà Vu Affair by Sofi Tukker, I could hear that the bass beats were, once again, a bit deeper than on the K240, which is excellent for the OneOdio Monitor 80, but kind of expected due to the anemic bass representation on the AKGs. Don’t get me wrong, the bass is anemic on the Monitor 80 as well, just a bit less.

I then switched to a more mid-bass-focused song, Morph The Cat by Donald Fagan and there was a nice imaging, but the mid-bass felt a bit superficial and bland. I found it more incisive on the AKG K240 and the sound was also a bit more colored (the sound on the Monitor 80 is overall a bit cooler). Listening to the beautiful, timeless Promontory by Trevor Jones, I could hear every layer with precise accuracy and how everything was constructed; also, there was enough space between instruments and sounds. While listening to Framganga from Danheim, I actually had to pause the song and check if something broke outside the window since the reproduction of the sound effects was so accurate.

Something similar happened when I played Aurora – The Seed, because the instruments were very clear and when the cello came in, I had to pause it because again, I thought it was a sound that was from outside my house and not from the headphones. The mids were very well reproduced, with clear voices and the bass would not have any impact on the sound. Moving to the treble-focused songs, I listened to The Animals – House of Rising Sun and the voices got a bit bright and lost a bit of contour at the higher notes; there was also some noticeable sibilance. It did seem reproduced and not really created though.
Listening to ‘Guns n Roses – Sweet Child o Mine’, I noticed that again, the voices aren’t as well contoured as on the AKG K240 and there was some amount of sibilance, more so than with the AKG K240.

I admit I am a bit surprised by the OneOdio Monitor 80 because I was a bit skeptic about whether they could develop a true pair of headphones suitable for monitoring. But, despite being the first device of its kind from this manufacturer, the OneOdio Monitor 80 is unexpectedly balanced and suitable for sound mixing. There is a bit more punch to the bass than on the AKG K240, so the bass-focused songs sounded really good, the mids were excellent, but I wasn’t really fond of the treble-focused songs due to the sibilance. But that’s expected with monitor headphones and at this price tag. All in all, the OneOdio Monitor 80 exceeded my expectation and I do think they’re a good entry-level open-back headphones suitable for mixing and for DJs. 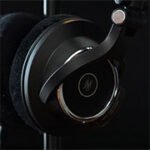