The Coumi Freedom Dots (also known as ANC-861) can be considered the successor to the ANC-860, sporting the newer Bluetooth version (5.2) which comes with some improvements, mostly in regard to power efficiency and the handling of multiple devices, but I have noticed at least a slight battery life increase on most earbuds that have adopted the BLE v5.2.

The Coumi Freedom Dots are advertised to be able to remain operational for up to 6 hours with ANC off and up to 4 hours with ANC on which is surprisingly realistic considering that I was able to get a similar set of results with the Naenka Lite Pro, another pair of TWS earbuds that use BLE v5.2. The hybrid active noise cancellation technology is still being used to minimize the impact of background noise on your sound experience and the design of the Coumi Freedom Dots does seem to favor a good inner ear sealing, so they may fare better than their predecessors in this regard.

The transparency mode is making a comeback and while it wasn’t available with the ANC-860, it does seem to have been finally implemented on the Freedom Dots – it’s a way to put into focus the outside noise and lowering the volume of the music, so you can clearly hear what’s going on around you – I’ve seen it in action on the Sony WH-1000XM3 and it was awesome. That being said, let’s put the Coumi Freedom Dots to the test and see if they’re worth purchasing.

The Coumi Freedom Dots resemble the traditional earbuds (minus the wire, obviously), so we’re dealing with a fairly large pair of earpieces, sporting a pea-shaped main section that gets inserted into the ear and an elongated neck for both an additional anchor point and to provide more room for the touch-sensitive controls area. The earbuds are also covered by a white glossy finish, so they’re pretty much inspired by Apple, right? In this case, yes, the Coumi Freedom Dots do resemble quite well the Airpods Pro. This isn’t necessarily a bad thing since people are fond of these Airpods look-alikes and the design has proven to be really well made. 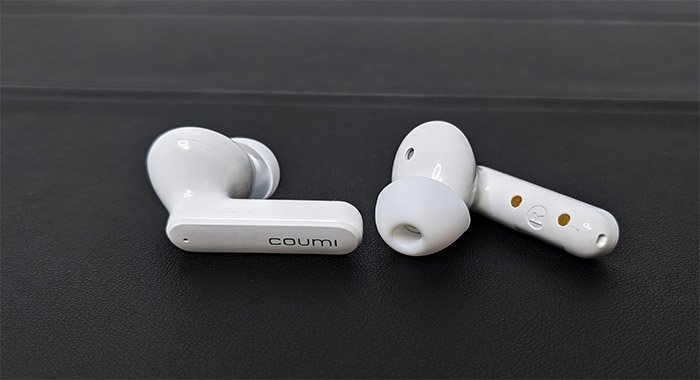 And indeed, the Coumi Freedom Dots are very comfortable to wear despite their fairly large size (each earbud measures 1.4 x 0.9 x 0.6 inches or 3.5 x 2.4 x 1.6 cm) and that’s thanks to the multiple anchor points, as well as the low weight of each earbud. It may feel that they can fall at any moment from the ear, but it’s just an impression and even if I chew on food or violently move my head, the earbuds did not fall off. Does that mean they will do great outdoors? Like I said before, the earbuds will stubbornly remain in my ears, but they lack that hook for the upper side of the inner ear, so I would still thread carefully outdoors. For working out at the gym, they should be perfect, especially since the Freedom Dots are IPX7-rated.

This means that you can technically submerge the earbuds under water down to about 3 feet and they should survive for up to 30 minutes, but I would avoid swimming with them, first because Bluetooth losses signal in water and secondly, because the earbuds will most likely fall from your ears. Wearing the Freedom Dots while raining or while showering are far better applications. I noticed that the main part of the earbuds is very similar to the Coumi ANC-860 and although it lacks that unconventional angle, the silicone cover ends up sitting in the same manner. But, while wearing them I can say that the decision to add more silicone tips (and there are a few of them in the package) was a wise one since I could get a perfect seal with the largest ones available, which means that little to no environmental noise will creep in. 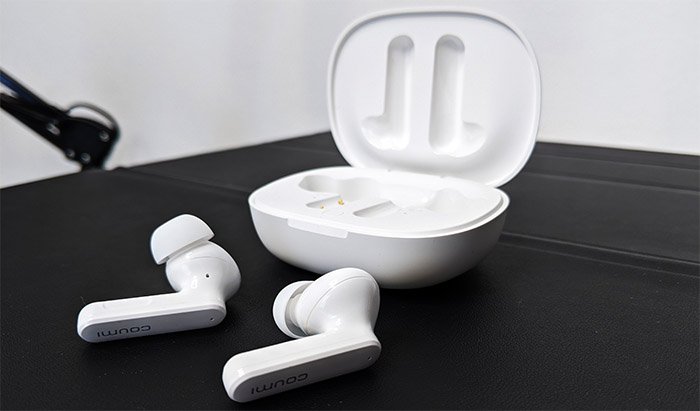 You may have noticed that there are no physical buttons, so the Coumi Freedom Dots rely on touch sensitive areas that are positioned on the elongated neck of each earbud. But, there is a twist as instead of simply tapping on the designated area, you need to squeeze the neck of the earbuds and you do get a light sound feedback that the action has registered. This is a far better system than what I saw on all other TWS earbuds because it removes any false triggers. That being said, if you squeeze once on the neck of either earbud, you can Pause/Play the track and, to move to the next track, double squeeze the right earbud (to return to the previous song, double squeeze the left earbud). If you have the Coumi ANC-861 connected to your phone when someone is calling you, squeeze once the neck of either earbud to answer or squeeze and hold for at least a second to reject the call.

To enable the Voice Assistant, you need to squeeze three times on the touch-sensitive area and, unfortunately, there is no volume control implemented which is a shame considering that I saw a few entry-level devices that had this function.
Each TWS earbud has one noise canceling microphone at the top of the elongated neck and one mike at the bottom to improve the call quality. Coumi hasn’t really focused that much on making the case as small as possible, but even if it’s a bit larger than other TWS earbuds that I tested, the charging case still remains fairly portable (should slip into a generously-sized pocket). And its size (2.7 x 1.9 x 1.0 inches or 7.0 x 5.0 x 2.5 cm) is sort of justified when you have a look at how the earbuds are positioned within it (they’re on their side). The 500mAh internal battery also needed a bit more space. 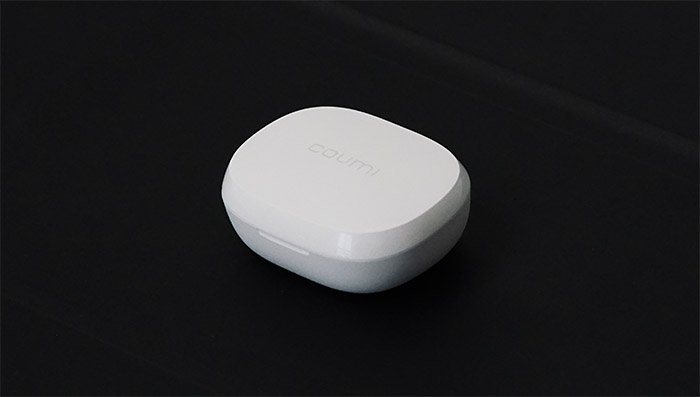 That being said, the charging case is covered by a white matte finish with a glossy band surrounding the top cover and, on its rear side, there’s a USB-C charging port and a small LED. This LED will flash white when you charge the case and when it charges the earbuds, so it does not show how much percentage is left, which is a serious minus and a deal-breaker for some people.

I noticed that the Coumi Freedom Dots have the same 12.5mm dynamic drivers as the ANC-860 which are quite large considering that we’re dealing with a pair of TWS earbuds. Some people think that having large drivers equals to a better sound reproduction and that’s not always true since the fine tuning will make a far more significant difference. As I said in the introduction, the ANC-861 come with the (currently) latest Bluetooth version, the 5.2 which brings a few new improvements to the table. But, with the entry-level models, it’s more related to a better battery life than any other exotic new feature, such as Dual Audio. It’s worth mentioning that there is no aptX support, but it does make use of the AAC codec, as I saw after I paired the earbuds to my smartphone. The pairing process is as simple as with any other Bluetooth device: enable Bluetooth on your smartphone, search for a new device, take the earbuds from the charging case and, after they’re detected by your phone, press pair. 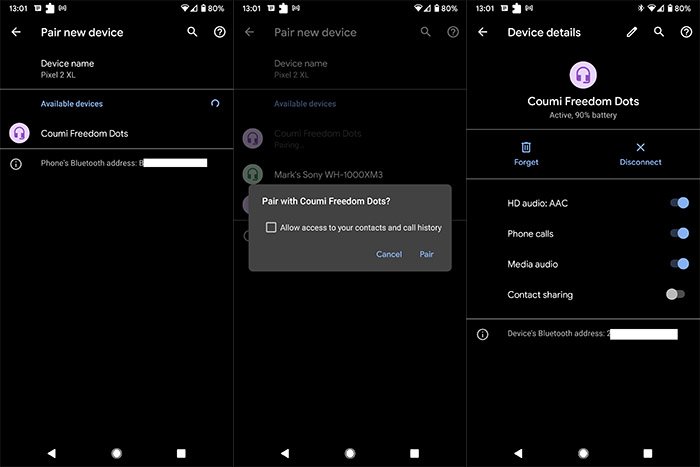 After every new Bluetooth version, the manufacturers seem to push the idea that you’re going to get a far better coverage, but that’s not entirely true (in my case, at least). I have been using a pair of headphones that support Bluetooth 4.2 (Sony WH-1000XM3) and the coverage is the same as with some TWS earbuds that support Bluetooth 5.0 or 5.2 – about 30 feet with a couple of walls between the phone and the earbuds, but with the doors left open. Even though the Coumi Freedom Dots and the ANC-860 make use of the same dynamic drivers, they end up sounding very different and that’s mostly because the former achieve a far better sealing. While playing a deep bass sound to check the driver quality, there was a faint buzz and the driver matching test has revealed that the sound plays straight in the middle of my head.

I also played a binaural recording which should allow me to check how well a 3D sound stage can be achieved and I can say that the the instruments are clearly defined, I could tell if a person was near or far, so, overall, the Freedom Dots did really well in this regard. Most TWS earbuds focus on achieving a good midrange sound, while neglecting the bass (especially the lower-bass) and the treble sound and that’s mostly due to the cost – the entry-level earbuds will lack high quality drivers and a proper fine-tuning. But I was surprised by how well the Coumi Freedom Dots handled the bass sound. I use the Sony WH-1000XM3 as my daily drivers and while they’re far from audiophile level, they sound quite well on the entire spectrum, especially after adjusting the EQ. And the surprise came when the Freedom Dots were able to reproduce a very similar bass level as an over the ears pair of headphones – sure, they can’t keep up at a higher volume, but going up to 70-80 percent, the bass sounded really good (especially the low bass).

The mid range sound was, as expected, loud and colorful, with a good instrument differentiation, while the treble doesn’t sound busy, featuring a fairly clear reproduction. But the higher frequency felt a bit off and shallow, although it’s still better than some other TWS earbuds in the same price range. The ANC also performed better than on the ANC-860 which failed to achieve a proper sealing with my ears, so it was far more perceptible. Don’t expect it to be as good as the Sony or Bose headphones, but it’s still fairly decent with some droning noise – it won’t do well with mid and higher frequency sounds. This time there is a Transparency mode which can be activated by squeezing and holding the neck of any earbud (it switches through Normal, ANC and Ambient sound). This mode plays back the sound that the mike hears, so, if you’re listening to music, it will temporarily turn the volume down and the ambient sounds are slightly amplified (only just a bit though).

The call quality was alright, as I could clearly hear the caller and my voice was fine on the other side as well, but if there is some loud background noise, it will creep into the conversation and make my voice sound far more distant that it truly is. And that’s something I have experienced with all TWS earbuds that I have tested – the Sony being the best, but they’re headphones.

The battery life is a bit below the ANC-860, but still excellent since I could listen to music for 4 hours and 15 minutes with the ANC on and about 6 hours and a half with ANC off.

The decision to steer clear from the strange design of the ANC-860 has worked wonders for the Coumi brand since the Freedom Dots can achieve a better sealing with your inner ear, so you do get a better sound quality than with its predecessor. The TWS earbuds are focused a lot more towards a bass-rich audio (the sound was surprisingly full), the call quality is decent and the Freedom Dots are very comfortable to wear for a long period of time. The battery life is very good and I did like the twist that they added to the touch-sensitive controls (including the haptic feedback). If they had volume control, the Freedom Dots could have been the perfect budget-friendly TWS earbuds, but even without it, they’re definitely some of the best in their price range. 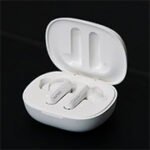