The Choetech BH-T01 is a very inexpensive pair of TWS earbuds which the manufacturer calls the SoulPods and I know that you immediately thought about the AirPods and you’d be right since it’s not only the name that reminds us of the Apple’s iconic earbuds, the design is also quite similar.

Indeed, there’s a vertical white charging case (which is very compact) and the earbuds themselves have that elongated neck. But that’s where the similarities end since Choetech went ahead and added its own elements to make this very inexpensive device as balanced as possible. The pair of TWS earbuds features support for both SBC and AAC audio codecs (no aptX, but that’s to be expected at this price point), they’re IPX5 rated, so you shouldn’t worry about wearing them when you’re working out or while it’s raining and the promised battery life is up to 5 hours on a single charge. 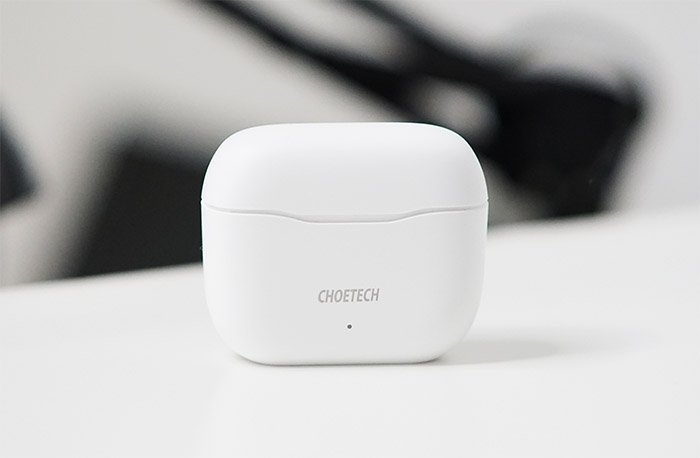 This should be enough to attract a lot of people that simply want to try out this new technology (well, not really that new..) and I know that the price is definitely very convincing, but the sound quality also needs to be at least passable. I have had some surprisingly decent experiences with a few budget-friendly TWS earbuds (such as TaoTronics SoundLiberty 79), as well as some not-so-good experiences with others (such as Coumi ANC-860), so let’s put the Choetech BH-T01 to the test and see if you should add them to your shopping list.

UPDATE 08.01.2021: After about three months of use, one of the Choetech SoulPods earbuds started getting hot. This issue persisted for a few weeks and it would happen immediately after getting the earbuds from the charging case. It could be a wiring issue (even though the earbuds experienced no mechanical shocks), but, I have contacted Choetech which immediately sent another pair of earbuds. I have used the new pair for a bit more than a month and everything seems to be fine for now, but I will update the article if it happens again.

Most of the entry-level, budget-friendly TWS earbuds have a fairly unique look, usually with a compact pea-shaped case and the earbuds themselves barely sticking out of the ear. But Apple wanted to keep the traditional look of earbuds (minus the wires, of course) and it seems that a lot of manufacturers thought that’s a good idea and decided to follow this design approach. So yes, the Choetech BH-T01 went that route as well, going for an all-white matte finish on both the earbuds, as well as the case and the manufacturer also went for that elongated piece that sits outside of your ear, but I am fairly sure that the battery is still in the larger section of the earpieces. If I were to compare them to another inexpensive pair of earbuds that went for a similar Apple-inspired design (the TaoTronics SoundLiberty 80), I’d say that Choetech’s decision to go for both an inner ear anchor point and an outside one (the elongated piece) was a better choice since you should get a better seal, which usually means a better sound quality. 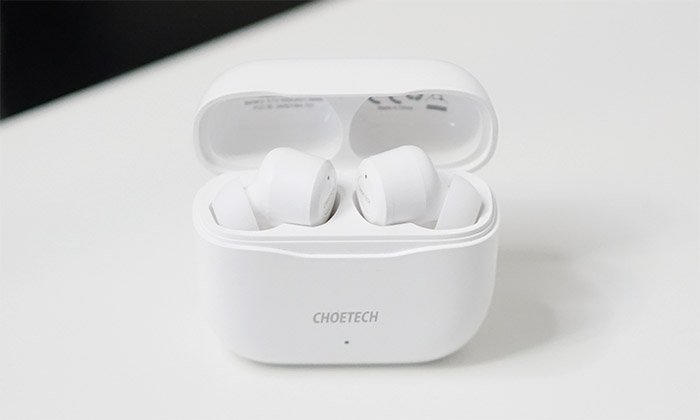 At the same time, one earbud measures 1.4 x 0.8 x 0.7 inches (3.5 x 2.0 x 1.8 cm), so they’re not that small but, considering that the earpieces are very lightweight, it’s not a problem to wear them for longer periods of time. Some manufacturers compromise the advantage of a comfortable earbud design by adding a physical button which, when pressed would most likely irritate the ear canal and it seems that a touch-sensitive area can fare better in this regard if implemented properly (mostly by turning down the sensitivity level). The Choetech BH-T01 did a fair job, so I didn’t have to frantically tap on the outer side of the earbuds, but I did notice the limited amount of functions. You can tap once for pausing or playing a track (available for any of the two earbuds), tap and hold on the left earbud to return to the previous track or tap and hold on the right earpiece to go to the next track.

You can also respond to a call by tapping once on any earbud, as well as reject or end a call by long pressing on any of the two buds – if you tap three times, it will enable the smart assistant. And that’s about it, there is no volume control. Besides the touch-sensitive area which is well defined, there is a small LED which lights up every few seconds after the earbuds are paired to a device but, after taking them from the case for the first time, the LED will cycle through red and blue. Furthermore, each earbud also has a microphone on the elongated piece and what looks like a second mike close to the silicone tip (and you get only a couple of additional tips in the package). As I said before (in the intro), the Choetech BH-T01 are IPX5-rated which means that the earbuds can survive a sustained jet of water (at medium pressure), so sweat or rain shouldn’t compromise them, but I would advice against jogging using these earbuds or doing any intense physical activities outdoors because they lack a silicone hook to remain in the ear in any conditions. 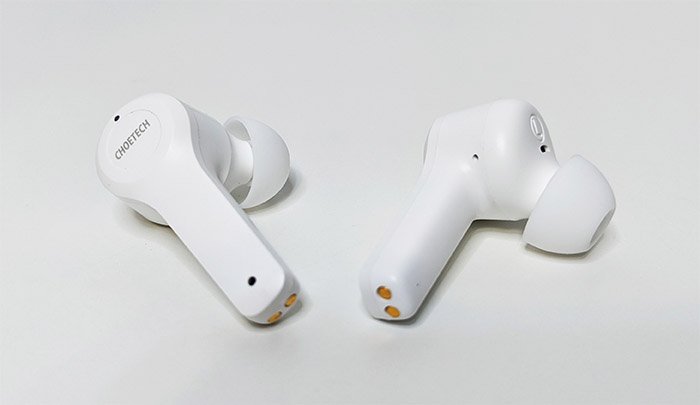 As for the charging case, it’s very compact, measuring only 2.3 x 2.0 x 0.8 inches (6.0 x 5.0 x 2.2 cm) so it’s very much pocket-sized. The case has a top section that opens very easily to expose the place where you need to insert the earbuds (they attach magnetically), but you will have to take them out at an angle since otherwise, it’s easy to scratch your finger. On the front of the charging case, Choetech has added a small LED which flashes white when the battery is low, it flashes red when it’s charging and will get solid red when fully charged, so pretty much completely unintuitive (you don’t get to know how much battery is left – two or more LEDs would have make a better system). At the bottom of the case, there is a USB-C port which is a great addition considering the cost of the earbuds – if Choetech could do it and still keep the device as inexpensive as it is, every other manufacturer should take notes and leave the microUSB port behind already.

Choetech says that the BH-T01 earbuds rely on a premium 10mm dynamic driver to deliver a more powerful audio, while also maintaining the clarity even at a higher volume. It’s true that a larger driver could mean that the sound can be fuller and it usually suggests that the earbuds are louder, but it’s not going to be an indication that the sound quality is better – the tuning is. The SoulPods also support the SBC and AAC audio codecs, the former is essentially the standard codec with all Bluetooth audio devices, while the latter does allow for a fairly bit better sound quality. And my smartphone did show that indeed, the Choetech BH-T01 make use of AAC. The SoulPods do support Bluetooth 5.0 so, the bandwidth is slightly larger than on the previous BLE standard, but these earbuds don’t really need a high bitrate – one could argue that the range is better, but, I have yet to see a significant range difference between earbuds that support Bluetooth 5.0 and those that support Bluetooth 4.0+. 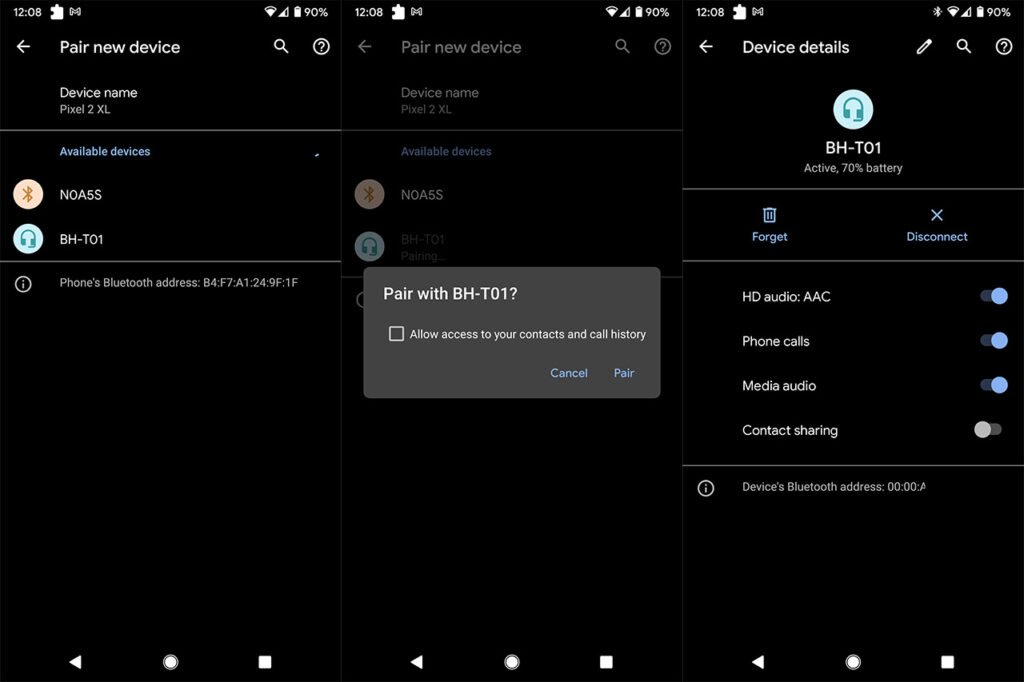 The pairing process is the same as with all other TWS earbuds that I have tested so far. Take the SoulPods out of the box (make sure that there is some power left) and wait until the LED starts flashing red and blue. At this point, enable Bluetooth on your mobile device, let it detect that there is a new set of earbuds that’s ready to be paired (should be BH-T01) and just tap on it to start pairing it to your smartphone. And that’s it, you can now play songs or any other audio file to your earbuds. In order to get an idea about what to expect from these earbuds in terms of sound quality, I decided to run a driver quality test which moves a low bass sound from the left to the right earbud and back, and, ideally, you should not hear any buzz, but there was some noticeable buzzing (to be expected at this price point). Next, I ran a driver matching test to see if the sound is going to be felt in the center of my head, with no deviation and indeed, the sound was central.

Afterwards, I decided to listen to some songs that are supposed to mimic a 3D stage (binaural technique) and the Choetech SoulPods did well since I was able to tell if an instrument was far or near the microphone, the separation between the instruments was clear, but overall, the sound was slightly bit hollow. And this takes us to the bass test. The deeper, low bass was not that great (felt hollow and lacked substance), but the high bass was far more decent. The mids is where the Choetech BH-T01 shines and it’s no surprise since most manufacturers go for this type of tuning to cover what most people will end up listening – that being said, the mids were clear and were very colorful. The treble is not that great and probably the least attention was put here since it sounds busy and mostly unclear (the instruments aren’t that well defined). I have been complaining that the earbuds that went for this type of design aren’t able to form a proper seal to keep outside noise from altering the sound quality and it seems that the BH-T01 did a decent job at keeping some noise out.

But it’s going to heavily depend on the rubber tips which aren’t that varied. As for the call quality, it was as expected from an entry-level pair of TWS earbuds – you get to hear the other person fairly well (if there is not a lot of noise around you), but the microphone is a bit weak, so the other person did complain that I sounded a bit hollow with the environmental noise constantly creeping into the conversation.

Choetech has equipped each BH-T01 earbud with a 40mAh battery and the manufacturer claims that it should be enough to deliver between 4 and 5 hours on a single charge. And that’s a correct claim since I was able to get 4 hours and 20 minutes on a single charge with the volume set at 70% (yes, a bit loud). The charging case does offer some additional juice thanks to its 400mAh internal battery.

After testing the Choetech SoulPods BH-T01 and wearing them for a couple of days, I can say that the manufacturer got a lot of things right. Sure enough, sound quality-wise, it’s your regular all-rounded experience (not even close to audiophile level, but it would be silly to expect it at this price point), but in terms of comfort it does go above most of its competitors (even some that are far more expensive). Furthermore, the touch-sensitive area was well defined (I would have liked some volume control) and the battery life was unexpectedly good for such as budget-friendly device. So, if everything I said matches what you’re looking for in a pair of TWS earbuds, then the SoulPods are definitely a solid option. 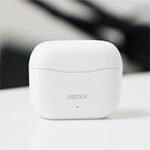