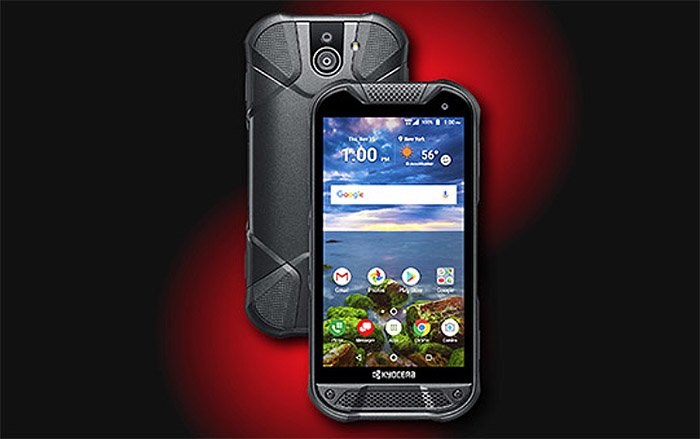 The Kyocera DuraForce Pro 2 is the latest handset from the Japanese manufacturer to join the rugged smartphones market as a successor to the DuraForce Pro in an effort to improve some key elements and make the device more suitable for the today’s exigence. But, despite people craving for an elegant, yet rugged smartphone, the manufacturers are still having a hard time to keep their devices slim and with the latest features, while also being resistant against drops or other mechanical shocks.

Samsung and Motorola have made some interesting advancements with their waterproof and dustproof Active and Force series, but it’s worth noting that Kyocera has also pushed its rugged smartphones towards a more modern design, so while the Kyocera Brigadier was already a better looking rugged smartphone than its competitors, the DuraForce Pro 2 got a bit closer to the more elegant non-rugged flagships. At the same time, it doesn’t differ that much from its predecessor even if it comes with a redesigned case and it still carries the signature look, has better internal hardware and the same iconic sapphire screen.
As expected, you won’t find the glass and metal combination (which is definitely attractive, but fragile) and instead, you get a mix of polycarbonate and thick rubber. The case has a curved back, soft rounded corners – it’s less curved than the DuraForce Pro 2, the lateral sides protruding towards both the bottom and the top sides. Furthermore, on the rear panel, there are four patches of texturized rubber that slide towards the screen and, on centre of the rear panel, the plastic is a lot smoother. 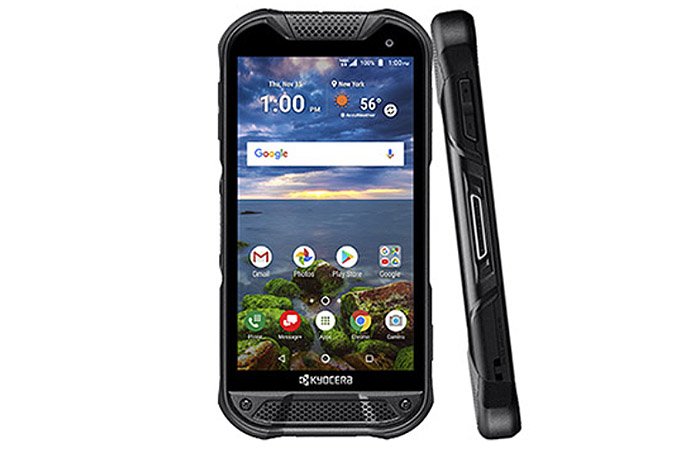 All around the case, you can find pretty much the same buttons and ports as on any other smartphone (yes, it has a headphone jack), with every port opening being covered by protective flaps and, unfortunately, Kyocera decided to get rid of the three front buttons for Back, Home and Recent and instead, it went with capacitive buttons – this hasn’t been the best decision because the physical buttons remained operational in every type of environment (as a bonus, there are front-facing speakers). The PTT/Programmable key has been kept from the DuraForce Pro (by default, it will activate Verizon’s push-to-talk service, if you use Verizon, but you can program it to either launch any app or to automatically send help texts and the GPS location in case you get lost or are in danger), as well as the Fingerprint Sensor on the Power key (this feature has now become a standard even on rugged phones).

Because of the curved back, the phone fits comfortably inside the palm of the hand, but the increased size over the DuraForce Pro 2 will not go unnoticed, since it now measures 5.91 x 2.89 x 0.53 inches and it’s got a bit heavier (8.57 oz). The bigger size means more screen real-estate, but bigger smarphones are usually more fragile and more prone to breaking than any other smaller handsets (until better technologies are developed, I’m not sure rugged smartphones should go over 5 inches). Another interesting aspect is that I found it hard to fit the phone in my pocket because of its thickness (so keep that in mind before purchasing). That being said, the main attraction of any phone is the display and Kyocera has equipped the DuraForce Pro 2 with a 5-inch IPS LCD display that features 16 million colours, a resolution of 1080 x 1920 pixels and a pixel density of 441ppi (so, nothing has changed in this department). Furthermore, you get the same Sapphire Shield protection, so the display becomes virtually unscratchable and it is a bit harder to break than the traditional screens (if it falls at a odd angle, the screen will shatter into pieces instead of cracking like the usual Corning Gorilla Glass protection).
Similarly to the DuraForce Pro 2, the display is greatly improved over the dim Kyocera Brigadier, so, even for a sapphire screen, you can clearly see everything even under direct sunlight.

Still, you should not expect the vividness of AMOLEDs or the true colours of iPhones, but the DuraForce Pro 2 does a fair job on delivering a good visual experience, with images and text being crisp and clear, the colour accuracy is reasonably good and it has surprisingly good viewing angles. What I found annoying is that Kyocera left so much space unused on the front, while the display of so many other smartphones cover almost completely the front side (except for the dreaded notch).
Note: You can use the touch-screen even if you are wearing gloves or if your fingers are wet.

Similarly to Kyocera DuraForce Pro, the DuraForce Pro 2 has a Military Standard 810G certification, so the phone should withstand low pressure, temperature shock, any contamination by fluids, humidity, solar radiation, high altitude, mechanical vibration, pyroshock, icing or freezing rain and more, which makes the handset perfect for working in industrial fields (the device is also Class I Division 2 rated, so it can be used in hazardous places without causing explosions). This should ensure a serious protection from the elements and in case you accidentally drop it, know that the screen is not unbreakable (as said before), so be aware that if you drop it on a sharp object face first, it could shatter (there is a lip around the display which will definitely help a lot with keeping the screen’s integrity intact).

Furthermore, the phone is IP68 rated, which means that it is protected against dust and it is waterproof, meaning that it can be temporarily immersed under water. To be more precise, the DuraForce Pro 2 will allow you to go as deep as 6.5 feet for up to 30 minutes and, at the same time, there is the Underwater Mode for all the camera options (you can film and capture photos under water).
And that leads us to the cameras. On the rear side, the DuraForce Pro 2 features a main 13-megapixel camera, with autofocus, LED flash and HDR, and a secondary wide-angle 8-megapixel camera (an upgrade from the 2-MP of the previous model). 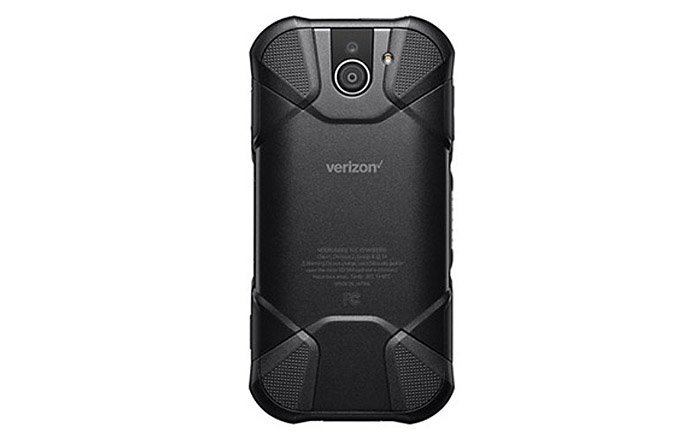 In good light, the camera can capture some really good photos, with accurate colours, a low amount of noise and an overall good exposure. In low light, the camera struggled a bit, capturing photos with a lot of noise and grain. The secondary wide-angle camera is definitely an interesting addition, because it can capture super wide-view 4K videos (and the upgrade to the 8-megapixel sensor is definitely noticeable). The front 5-megapixel camera (no upgrade here) is good for selfies, but again, it will do a decent job in good light, but not so much indoors and in low-light environments. Another great feature that’s been developed for the DuraForce Pro 2 is the advanced echo and active noise cancellation using four microphones which have the role of counterbalancing the external sounds, allowing you to better make phone calls (even using the speaker option) or simply listening to music or videos.

On the inside, the DuraForce Pro 2 is equipped like a mid-range smartphone, sporting an octa-core Qualcomm Snapdragon 630 chipset (octa-core 2.2 GHz Cortex-A53 CPU), an Adreno 508 GPU, 4GB of RAM and 64GB of internal storage memory, which can be augmented by 512GB using a microSD card. This hardware is specific to a mid-range handset and the performance will be as expected: great at multitasking, but not the best with 3D games that require a lot of resources. The phone also runs on Android v8.0 Oreo, but it has some pre-installed elements from Kyocera and some more from its carrier (the DuraForce Pro does not have an unlocked version, for now) – thankfully, the 4 GB of RAM will make a difference to contain the bloatware from the carrier.

Ignoring the carrier apps, the interface is reasonably clean and Kyocera added only a few native applications, such as the Outdoor Portal, which is a good tool for checking the weather, the real-time position of the moon and the sun, the correct altitude and even the tide with a fish activity rating. There’s also the Camera Underwater Mode which basically disables the touch-screen and let’s you control the phone using only the physical buttons. 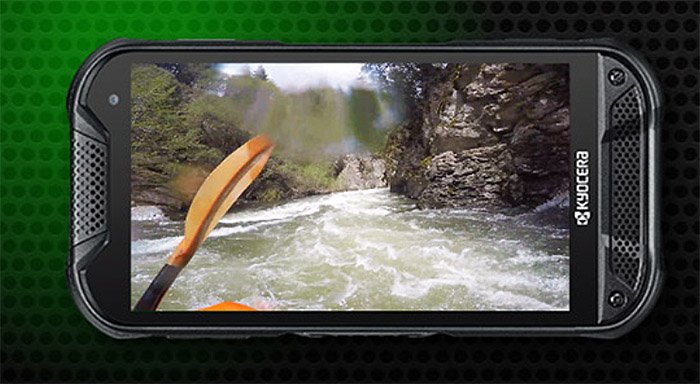 The last aspect that I would like to cover is the battery life. Just like the Duraforce Pro, the Pro 2 comes with a non-removable 3240 mAh battery which will get you through a full day of medium use (in the continuous loop video test, the battery died after almost 7 hours). The good news is that the phone comes with the UBS Type-C fast charging, so the battery will charge up to 60 % in about half an hour and there is support for the Qi wireless charging, but the charging pad is not included.

Verdict: The Kyocera DuraForce Pro 2 is definitely a better smartphone than the Kyocera Brigadier, but less of a significant upgrade over the DuraForce Pro 2 (although it does have a slightly better camera and more powerful hardware). At the same time, some improvements have been made to the overall ruggedness from its predecessor (the case it completely redesigned), but I’m not really a fan of not having the option to purchase this phone unlocked from the start and being forced to go through a carrier (which this time has added an annoying amount of bloatware). This is the main minus of the Kyocera DuraForce Pro and of course, I have already signalled all of its pluses, so if it’s not a problem for you to go through Verizon, this is a worthy smartphone for active people that like rock climbing and swimming.