The Quntis fast charger was developed to cater to the needs of iPhone users that did not get a power brick inside the package when they bought their new phone. Of course, this is a choice made by other brands as well, such as Samsung which thought it would be a great idea to follow on Apple’s footsteps.

The good news is that this gave the third-party manufacturers, such as Quntis, the opportunity to create fairly inexpensive devices which should, supposedly, work just as good as the original hardware. It’s important to carefully select the proper charger because you can damage your Apple products and to put your mind at ease, Quntis says that their Lightning cable is MFi Certified. There is no serial number on the cable itself to confirm it, but checking the MFi licensed accessories website, it has revealed that Quntis is there with a power and sync cable (the model name was LPWQU002-001).

The 30W charger is not on that list, so only the cable seems to be certified. In any case, there is support for PD 3.0 (power delivery), so you can recharge a smartphone in far less time than you would when using the original 5W or 18W charger. I would have also liked to see support for the GaN technology since it has gained so much traction the last few years due to the efficient power delivery and support for higher wattage, but, for now the 30W charger remains a more inexpensive option and should still recharge an iPhone quickly. After taking it from the package, I noticed that the power brick looks fairly generic, being made of plastic and covered by a white finish (a combo between glossy and matte).

The charger measures 2.2 x 1.6 x 1.0 inches (5.7 x 4.0 x 2.5cm), so it’s fairly compact and you can easily slip it into a pocket. And yes, the Lightning cable is detachable with a Velcro strap to keep it together, so it’s fairly travel friendly. The cable is 6.6 feet long and it is Lightning to USB-C – you can connect it to the only USB-C port available on the charger and I do like that you are not really stuck in the Apple’s ecosystem, so it’s easy to use other USB-C cables as well. I do look forward to the day when Apple is going to ditch the Lightning standard and embrace the USB-C standard, but I think they’ll sooner move to wireless-only charging before making such a ‘radical’ change. 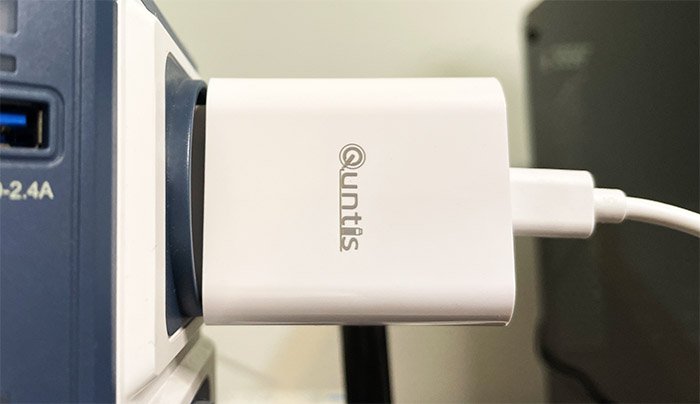 One minor minus would be that the cable is not braided which would have made it far more stylish, but it seems that Quntis really embraced the generic style where the functionality trumps over the design. And as long as it works, I have no complaints. I have tested a few other chargers over the years and most had some form of protection against over-current, over-voltage and so on, but I did not find any mention that Quntis has added anything of the sorts on its 30W PD charger. All I could see is that the charger uses UL94-V0 fire retardant polycarbonate for its build. The advertised power delivery output is 15V-2A / 20V-1.5A / 3.3V~16V-2A, but I do need to test this claim.

The amperage fluctuated a bit going between 1.4 up to 1.6A. I then switched the power brick to the Quntis, but kept the original Apple cable and the power output stabilized at 20.17V. The wattage varied slightly between 23.4W and 24.4W, while the resistance moved between 16.6 to 17.3 Ohms. The amperage fluctuated between 1.16A to 1.18A, so it was a bit more stable than the original Apple charger.

Afterwards, I returned to the Apple charger and connected the original Lightning cable that I got in the box of the iPhone 12. This way, I saw that the power output remained stable at 8.93V and the wattage was also fairly solid at 12W, with little variations between 0.2 and 0.5W. The amperage fluctuated between 1.38 to 1.67A. Next, I connected the iPhone 12 to the Quntis charger and the provided cable – the power output moved between 9.15 to 9.16V and the wattage moved between 13.6 to 16.9W. 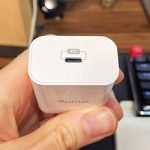