The Crave Plus is the entry-level model from the QC 3.0 + Type C series of portable chargers developed by the US-based manufacturer and the higher-end models can go up to 50,000mAh so, using either the 45 or the 60W power delivery, it’s possible to even power up laptops. The Crave Plus has a capacity of 10,000mAh and the power delivery is 15W, so it should be able to quickly charge up to two mobile devices at the same time (one using the QC 3.0 technology).

When it was released (about a couple of years ago), the smartphone market was struggling to provide a decent battery life (especially the iPhone) and things barely changed since then, so, even now, most phones (even the high-end ones) won’t last more than a day (with medium use). This means that having a portable charger with you all the time is pretty much a necessity (unless you want to rely on a second smartphone) and the market does have a large variety of devices to choose from, with brand names such as Anker and Mophie being the most prominent in this field. 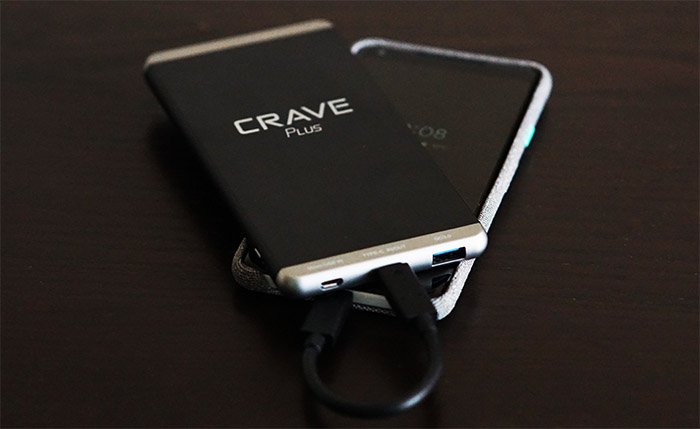 But the Crave Plus took a rather unique approach in order to differentiate itself from the competition, so, instead of the usual compact, but bulky rectangular body, the portable charger tries to mimic the iPhone features, sporting a slimmer rectangular case with rounded corners which means that from the distance, it looks almost identical to a smartphone. The illusion breaks when you actually take the portable charger in your hand (the large Crave Plus logo printed on the front is also a culprit), but it won’t be plastic that what you’re going to feel, instead, the Crave Plus is built like a tank, featuring a metallic case with some slim plastic elements on the top and bottom of the device (to imitate the smartphone bezels).

When I tested the Ainope portable charger, I did notice that the internal components may disconnect if the device fell down, but I don’t get the same feeling with the Crave Plus at all, everything seems well put together. It’s worth noting that the metallic part is covered by a black matte finish, so you don’t have to worry about fingerprints, while the plastic sections are light gray.
The Crave Plus measures 6.2 x 3.1 x 0.4 inches, again, confirming that it has pretty much the size of the iPhone 8 Plus, well, it’s a bit thicker, but, put a case around it and you won’t be able to tell them apart – even when put next to the Pixel 2 XL that I’m currently using as my daily driver, it’s pretty much the same size when I use a protective case.

The weight is a different matter since at its 8.8 ounces it’s definitely heavier than your regular smartphone, but it’s in line with other 10,000mAh portable chargers (the metallic shell makes it a bit heavier than the Ainope power bank which weighs 6.98 oz). Obviously, when you put it in your pocket, you’ll feel its weight, but it doesn’t take more space than the usual smartphone does. Since I already brought the Ainope portable charger into discussion, one of its main features was a small display which would show the remaining battery in percentage and no, Crave Plus does not have a similar system, but it does rely on four small circular LEDs to tell you the amount of battery charge left. 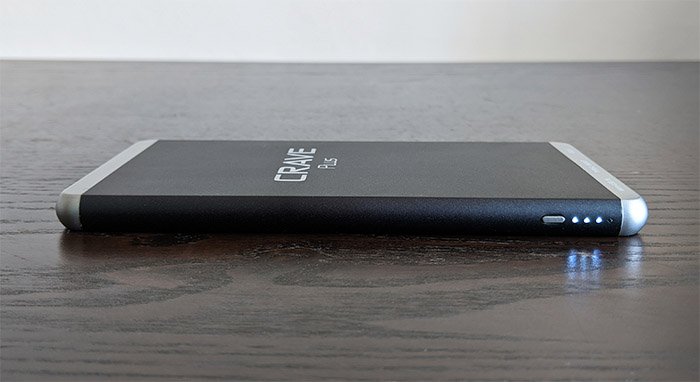 Next to them there’s a small button which you have to press in order for the LEDs to light up: one LED indicates that 25% is left and each LED will add another 25% up to 100 – the LEDs will turn off after a few seconds have passed to preserve the battery life (you can also double-tap it to immediately turn off the LEDs). On the bottom of the device, you’ll find a micro-USB In port (to recharge the battery of the Crave Plus), a USB Type-C In/Out (can be used to both recharge the internal battery and any external device) and a USB Type-A port with QC 3.0 (used exclusively for recharging other devices). It’s worth noting that you can use the microUSB port for charging up the Crave Plus battery, while, at the same time, you can use the remaining ports to charge up a couple of smartphones.

Inside the package, the manufacturer has provided a Type-A to microUSB cable (it’s quite short), so, you will have to use your own cables for the other couple of ports. Most portable chargers that have a capacity of 10,000mAh are actually rated a bit below (can go down to 7,000mAh) due to needing to up the voltage for the USB output and, since the internal circuitry will also eat up a bit from the overall capacity, you’ll actually end up with about 6,000 mAh. 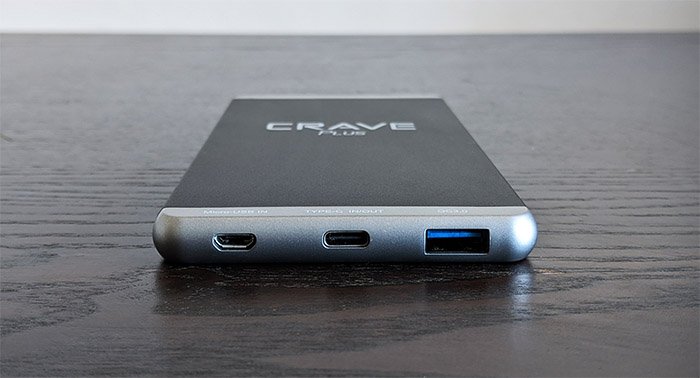 The Crave Plus’s polymer battery is rated at 3.8V, so, similarly to the 10,000 mAh Ainope portable charger, about 6,500mAh should be left for the external devices. This means that using a Google Pixel 2 XL that comes equipped with a 3520mAh, the Crave Plus should recharge it fully about 2 times – to my surprise, it actually was able to recharge the battery from 0 to 100 percent two times and the third time it went close to 30%. This means that there is more capacity left for the external devices than I originally thought (either that or the battery of the Pixel 2 XL is starting to fail). It’s also worth mentioning that it charged my phone just as fast as the original charger (that came in the package of the Pixel) using a USB-C to USB-C. If you wish to recharge the 10,000mAh battery of the Crave Plus using the microUSB port, it will take about 5 hours from 0 to 100% and, if you decided to use the USB type-C port, it will take about 4 hours and 40 minutes.

The Crave Plus is clearly one of the best looking portable charger (for a mobile phone) available on the market right now and in most cases, this is enough to persuade a large portion of the users to try it out in favor of its competitors. But, the looks aren’t the only good thing about the Crave Plus since you also get a quick way to charge up to two devices simultaneously, as well as a variety of ports to choose from. 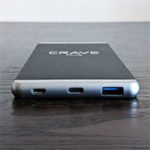