The BlitzWolf selfie stick (BW-BS10) is a surprisingly versatile piece of technology, offering the option to quickly capture group photos thanks to the 2.4-foot long extensible rod and the small Bluetooth remote control.

I know that the selfie stick trend has faded over the years (its height being around the beginning of the 2000s) due to the public’s backlash against the vanity culture, but also simply because in a tourist area it’s difficult to move around when everybody is wielding long metal poles around. 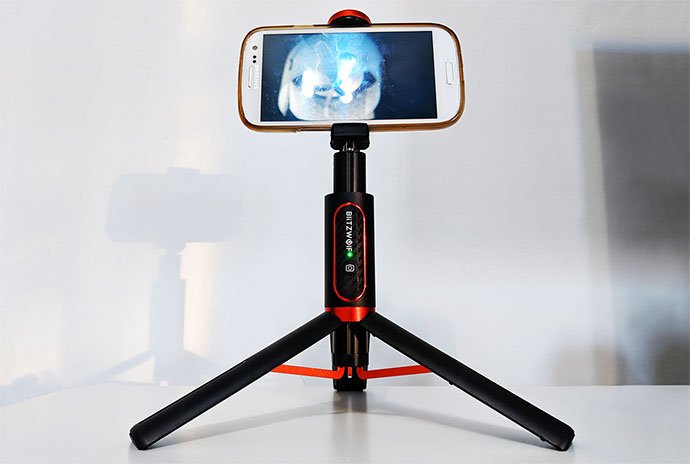 In spite of this, the selfie stick is still very useful for getting the best selfies and I know that you can extend your arm, but the extra length will ensure that the camera will not distort your features and that you can add more people inside the photo, including the person capturing the photo – you also don’t have to rely on strangers to take your photo and risk your camera or phone to be stolen.
So, even if it may not be in the spot light, BlitzWolf seems to be heavily invested in the selfie stick market offering a relatively large array of devices, each with its own shape and dimensions, but what most BlitzWolf selfie sticks have in common is the excellent portability and the ability to become a tripod which significantly expands the applications of these devices.

The BW-BS10 Selfie Stick comes in a small package and when you take it out of the box, you’ll be greeted by a relatively small cylinder which measures 7.67 x 1.29 x 1.18 inches and weighs 6.0 ounces, so it’s incredibly easy to carry around without taking much space from your backpack. The entire device is covered by a black matte finish (doesn’t retain fingerprints) with some red accents to demarcate the most important sections: the top surface is covered by a rubbed-like coating (to make it comfortable to push the extended arm back into place) followed by a red ring and underneath it, there’s a metallic section with a small remote seemingly embedded within the material. 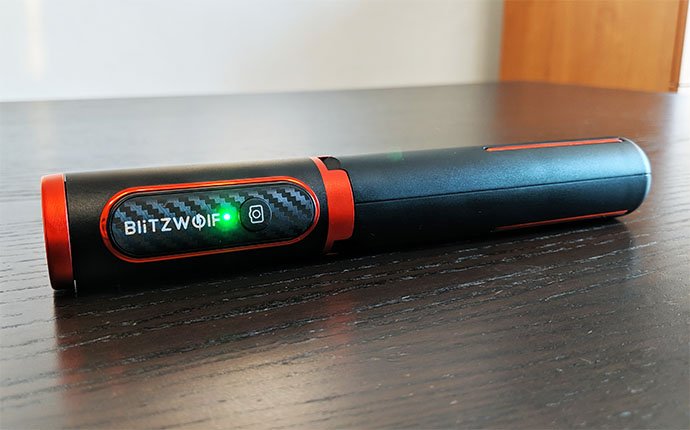 If you grab the red ring and pull, it will extend the metallic arm divided into eight parts (you may have to insist to extend all of them), the topmost being dedicated to attaching the smartphone. BlitzWolf says that you can insert smartphones with the width between 2.4 and 3.5 inches, but I was barely able to put a 3.2 inch-wide phone (so this seems to be the limit). When I tested the Selfskie, I noticed that it relied on a rubber band to extend the clamp which could loosen up over time (and the phone could fall off), but BlitzWolf uses a spring system which should ensure that the BW-BS10 clamp mechanism will not wear off over time. 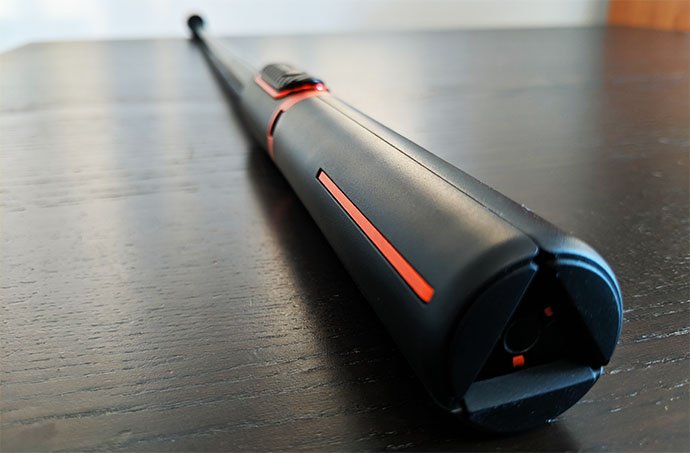 After attaching the phone (there are silicone covers to protect your device from scratches), the selfie stick allows you to tilt the smartphone towards the pole as well as pivot it to allow you to capture vertical photos or videos. I also did the shake test and the smartphone would remain attached to the pole regardless of the amount of frantic movement.

Unless you want to set a timer on your smartphone, then you should use the included Bluetooth remote (which is very easy to remove from its enclosure (push your fingernail from underneath the remote until it disconnects) and, in order to pair it to your device, press the Camera button once until the green LED will start flashing (the sign that the remote is ready to be paired). At this point, enable Bluetooth on your mobile device (Android OS or iOS) and choose to pair it to the BW-BS10 – doing so, will turn the green LED to solid green (and will remain this way until you turn off the Bluetooth connection on your phone). The remote doesn’t rely on batteries, instead you get a small micro-USB cable to recharge it (next to the button, you’ll see the microUSB port) – the battery life is rated at 20,000+ consecutive photos. 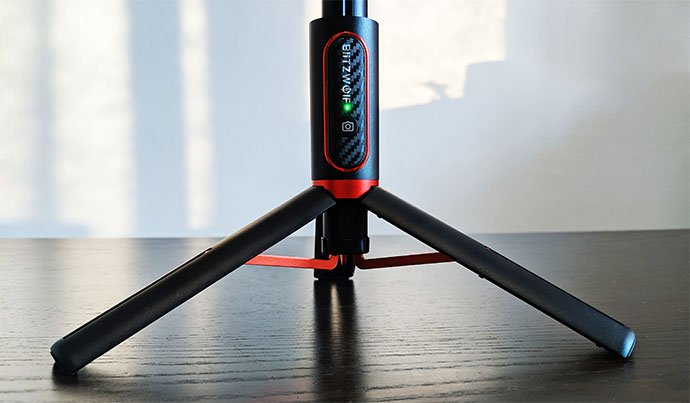 Underneath the metallic part of the selfie stick, the last section of the cylinder is made of plastic and it’s divided into three parts which, when extended, will form a tripod. Internally, the three feet are kept connected by a metallic skeleton and, at the bottom end of each feet, there are silicone pads to keep the device from budging. This way, you can use the BlitzWolf BW-BS10 not only as a selfie stick, but also as a reliable tripod for your smartphone ensuring that the captured video isn’t going to be affected by shaking the camera around (the monopod and tripod forms are also great if you want to vlog). Now, while I do like the fact that the selfie stick can be used in multiple ways and the portability factor is something to be praised, I did find the opening mechanism a bit unintuitive and the first time I took the device out of the box, I pushed and twisted everything until I figured it out what’s the right way to expand both the selfie stick arm and the three feet.

Conclusion
Despite losing some of its popularity, the selfie stick is here to stay and the BlitzWolf BW-BS10 was designed to satisfy your need to get that perfect selfie or to include as many people as possible inside the photo. Furthermore, the device is extremely easy to carry around and the tripod mode is great for vlogging, so, if you’re in the market for this type of device, you should definitely take the BlitzWolf selfie stick into consideration.

Check out the product here: 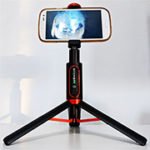