The Atuvos Bluetooth tracker was developed as an alternative to Apple’s AirTag and, while it doesn’t truly solve all the privacy aspects (that’s Apple’s job), the tag does have a few interesting features that may make it more attractive.

The Atuvos Bluetooth tracker does make use of the Find My app which has undergone some changes over the last year to address the privacy issues (especially the grave stalking aspect which is still isn’t completely solved). So, the entire suite of features is available here as well, including the chirping for detection, the almost infinite range (depending on the number of Apple devices in the vicinity) and the notification that you may be tracked by a malicious third party (if someone implanted a tag on you). 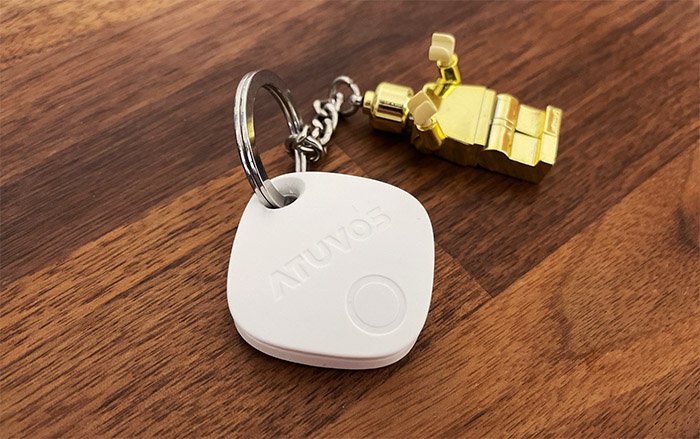 There’s also the QR code that can be scanned to show specific info, such as phone number, but here is where we see one of the new elements that’s missing on the AirTags and other Bluetooth trackers. And that’s the ability to turn off the Atuvos Bluetooth tracker.

Indeed, there’s a small button that will turn off the device, but, at the moment the QR code is scanned, the device will turn on again. Furthermore, the battery is removable, which is excellent news and the advertised range is 400 feet, so, let’s put the Atuvos Bluetooth tracker to the test and see if it’s a better device than the Apple AirTag.

The Atuvos Bluetooth tracker has a small plastic case and yes, it’s not quite as compact as the Apple AirTag, but does it really matter? At 1.37 x 1.37 x 0.27 inches (3.5 x 3.5 x 0.7 cm), it’s probably a bit thick, but you should have no issue carrying around with you. And there is a hole to allow you to add the tracker to the key chain, so there truly are no complaints about portability.

Also, the size of the AirTag is a convenience and an inconvenience at the same time. First, you need to get an accessory to add it to a keychain and secondly, it’s more likely to notice that someone has put a thicker rectangular tracker within your belongings than a coin-sized and shaped metallic device. So yeah, the point of these tags are to be found when they’re lost. I know that some of you may frown upon the use of plastic, but the idea is for the tag to be dust and water resistant.

The Atuvos Bluetooth tracker case does have an opening within the canal that surrounds the frame of the tag, so is it truly a rugged device? The Bluetooth tracker is IP67-rated, so, just like the AirTag, you can submerge the it under water down to 3.3 feet for 30 minutes without experiencing any damage. Also, the device should be sealed against dust ingress, so what’s with the opening in the case?

I am fairly sure that it’s there for the speaker (which can get fairly loud, up to about 90dB). The way the case is shaped should allow you to detach the two sections to reveal (and change) the battery, so I decided to check just how easy it is to do so. It’s not easy at all, because I had to use a prying tool to pop the upper part of the case open.

The manufacturer says that it’s a measure to keep children from potentially ingesting the battery, but I am fairly sure it’s protection against dust and water. And yes, you should be able to see a silicone seal glued into place which surrounds the battery when the top cover is re-attached.

Let’s talk about the button

Next to the Atuvos logo, there is a small circular button which, when short pressed, it will power on the Bluetooth tracker (the small speaker will let out two chirps), but you do have the option to turn off the tag as well. Just long press the button for about 3 seconds (it will do a long beep).

Lastly, it’s also possible to reset the Atuvos Bluetooth tracker by holding the button for 10 seconds – after 7 seconds, the speaker will let out two long beeps and then two short beeps to confirm that the device has been indeed reset.

What’s inside the Atuvos Bluetooth tracker?

As I said in the Design section, I used a prying tool to detach the top cover and it revealed a sealed CR2032 battery that should last for about a year. But, while doing so, I noticed that I could also pop off the bottom-placed cover as well.

This way, I could see the PCB, but nothing really stood out to me, with the exception of the WW03012229008689 IC. I also saw that there were three small screws which I removed and it made possible to detach the PCB entirely, revealing the bottom-placed speaker.

Working with Find My app

The Find My app should be already installed on your iPhone, so just open it and tap on the Plus icon on the right side of the Devices section. Then, from the list, choose Add Other Item (Add AirTag is not going to work) and then short click the button on the Atuvos Bluetooth tracker.

After the speaker chirps twice, the Atuvos Tag should appear as available in the app. Name it, select an Emoji (?) and then the tag should be linked to the Apple ID. That’s about it for setting up, but the app offers a few more options. You get to see the location of the tag on the map (with the Emoji), you can Play the Sound to find the tracker and you can check out the Directions to how to reach the tag. Slide up to open even more options, from which there’s the Notifications which will let you know that you left the tag behind (useful to not lose your keys, for example) and you can also enable the Lost Mode.

Tap on it to personalize the behavior of this mode. You can receive a notification when the Atuvos Bluetooth tracker has been found and you don’t have to worry about someone else linking the tag to another Apple ID (the reset doesn’t seem to erase all the info). There is more because you can also leave the person that finds your belongings a message containing a phone number or an email address – this info can be accessed by scanning the QR code.

The Atuvos Bluetooth in action

First, let’s talk about range. Atuvos says that the maximum range is 400 feet (or 120 meters) and this is the distance that the Bluetooth tracker will connect to a single iPhone. If there are more in the vicinity, the range is extended since the device will connect to the closest one – the Apple devices will essentially behave as access points, while the Atuvos Bluetooth tracker is a client device.

But is the 400 feet range claim actually true? Yes, it can actually go a bit more as long as it’s in open space. Add trees, buildings and other type of interference and the range is going to be slightly shorter. In my case, a large concrete building cut the range to about 250 feet, but it was an industrial construction (lots of steel) – a residential building will be more forgiving. I have mentioned that the chirping of the Atuvos Bluetooth tracker goes up to about 90dB, but that’s only if you stay very close to the device, which is not really the case when you lose it.

Instead, it’s going to be a few feet away from you and that’s in best case scenario. So, is the tracker loud enough? It depends. If it’s near a highly trafficked area, you’ll need to keep very close attention to the specific beeps, otherwise, it’s going to be very difficult to hear the speaker. A feature that’s missing from the Atuvos Bluetooth tracker, but it is present on the AirTag is the UWB (Ultra Wideband). What this technology does is to increase the precision of the tracking, allowing you to pinpoint the location of the object with a lot more accuracy than when using only Bluetooth.

But do be aware that UWB works over a short distance. So, I do admit that I would have liked to see this feature built into the Atuvos tracker as well, but the device will work fine without it. Now, let’s talk about the security features.

The fairly unique characteristic of the Atuvos Bluetooth tracker is its ability to be turned off. This means that in case you do find a tag tracking you, it’s possible to disable it without taking the battery off (some trackers don’t even offer this option).

Also, I did like that in case someone finds the tracker when it’s turned off and decides to scan the QR code, but doesn’t bother calling or emailing you, the Atuvos Bluetooth tracker will turn on automatically and will send a beacon with the location information to you.

So, is the Atuvos Bluetooth tracker a good alternative to the AirTag? The answer is yes, it offer most of the features of the Apple tag and a few more. It does work with the Find My app, it has a fairly loud beep, there is the possibility to change the battery and most importantly, there is the possibility to turn off the device. Furthermore, the case is water resistant and you don’t need any accessory to add it to the keychain. Yes, there is no UWB, but the Bluetooth signal reaches quite far and if there are enough Apple devices in the area, the range gets pretty much limitless. 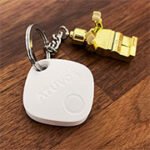