The FS S3410-10TF-P is currently the only Gigabit Ethernet switch model from the L2+ Fully Managed Pro series that supports PoE and, just like the FS S3910-24TF that I tested a few months back, it’s not as well equipped as the multi-Gigabit members from the same series, but this does mean that it’s also more affordable.

So, I do think that the targeted audience consists mainly of small and perhaps some medium businesses, where an uplink above 1Gbps is not yet necessary, nor some other advanced features, such as the hot-swappable power supplies. I also noticed that the support for the physical stacking of multiple devices is gone, so you won’t be able to connect multiple identical switches for an easier management, like you could with the FS S3910-24TF. 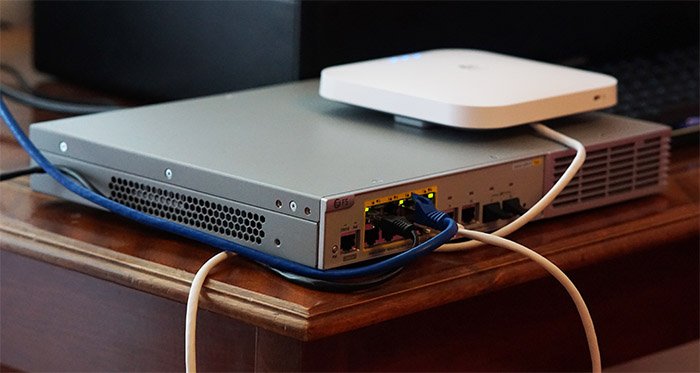 But, this model does come with support for PoE+ (802.3af/at), sporting a maximum budget of 125W (or 30W per port) and, considering that most (if not all) wireless access points, as well as the security cameras support PoE, then it’s pretty much a must-have feature at this point. Other than that, the S3410-10TF-P is fanless and it does have a couple of SFP ports (Gigabit) to allow you to make a proper connection between two networks over a huge distance without losing any performance (using optical transceivers and cables, of course). Since we’re dealing with a fully managed Ethernet switch, there is more to the software than the usual smart managed switches and the great thing about FS hardware is that it’s very close to Cisco, allowing for an easy transition if you come from a far more expensive equipment.

FS S3410-10TF-P has a very similar design to the FS S3910-24TF, both featuring a silver metallic case with a front plastic part, but they are different in terms of size, the S3410-10TF-P being the most compact from the entire series. I know that there are slimmer Ethernet switches out there (check the EnGenius ECS1112FP or the Zyxel GS1920-8HP which have a similar PoE budget), but at 1.73 x 13.39 x 10.24 inches, the S3410-10TF-P is still fine for most types of racks. The Ethernet switch is fanless, so you don’t necessarily need to mount it in a rack and the manufacturer has provided four silicone feet that are very effective at keeping the device in place.

But we’re still dealing with a fairly large device, so it will occupy a lot of space from your desk and it’s wise to mount it in a rack after all. Since it does not have any fan, the FS S3410-10TF-P is completely silent and I know that people will wonder about the heat management. The metallic case is fairly large, so it should be easier to keep the temperature down and FS has also perforated part of the left and right side of the case. The front section also has some punctured holes underneath the plastic section (on the right side).

While functioning, I saw that the top of the case would get warm to hot on the left (where there’s the CPU heatsink) and only a bit warmer than the room temperature on the right side (above the PSU heatsink). The overall design of the FS S3410-10TF-P has an industrial tone, as most other Ethernet switches (with very few exceptions) and that will fine with the targeted audience (SMBs and maybe some tech enthusiasts). But, even though it has 10 Ethernet ports, the front of the switch doesn’t feel like it’s missing anything (especially considering its size), nor is it overcrowded, featuring a large ventilation grill on the right side, while from the left, you get a PoE button which enables or disables the PoE capabilities of the Ethernet switch (the PoE LED will turn orange when PoE is disabled) and next to it, there’s the Console port (RJ45).

The Console port can be used for serial management (there is no serial cable inside the package) and there are two LEDs above it, one for showing the Status of the switch (solid yellow indicates a temperature issue and solid red shows that the switch is faulty) and the other will display the PoE mode. Next to the Console port, there’s the block of eight PoE ports, each with a dedicated LED (I know it’s a slightly strange approach, but every second LED is for the port at the bottom). The LED will be green if the connection is made at 1Gbps (yellow if it’s made at 10/100Mbps) and will flash when there’s activity (data movement).

Next to the PoE block of ports, there are two non-PoE Gigabit Ethernet ports, two SFP ports and a recessed Reset button (press and hold it for at least 5 seconds and then wait for about 10 seconds). The SFP ports can be used with optical transceivers to connect with another switch from a different location (this way, the speed is not affected by interference). 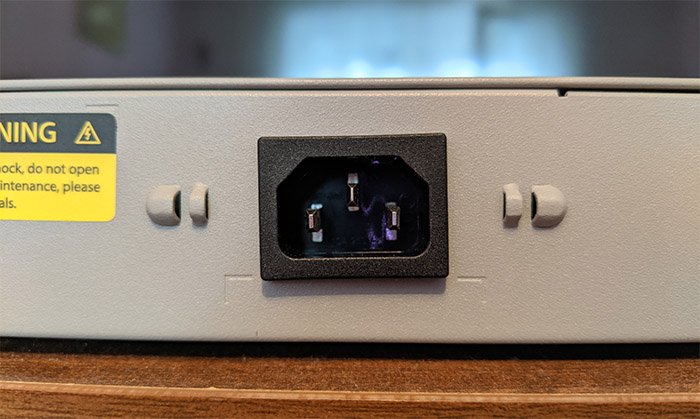 On the rear side of the FS S3410-10TF-P, there’s the power connector (yes, this model does not have hot swappable PSUs) and further to the right, there’s the grounding screw. FS has added a grounding cable inside the package and there’s also a cable clamp (that you can attach to the bottom), as well as a couple of mounting brackets (for 19-inch-wide racks).

Just like on the S3910-24TF, be aware that the FS S3410-10TF-P has a seal which, if broken, will void the warranty. If that doesn’t bother you, then the tear-down process is quite simple. You will need to remove the six screws from the top of the case and the three screws from each side (one underneath the aforementioned warranty seal). You can also remove the front plastic section, which will pop off after you disengage the four plastic hinges from the bottom of the Ethernet switch. The metallic top can then be easily removed, revealing that the PSU uses a pad that comes in contact with the top section for a better heat management, which is why this area will usually be warmer. 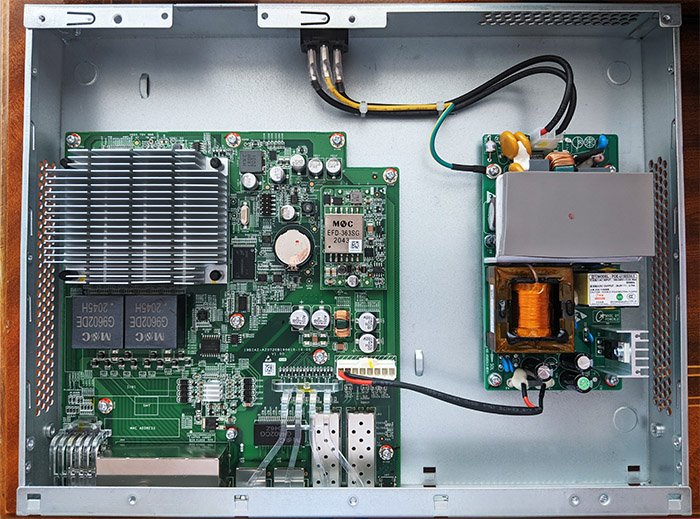 Next, I had to remove the large aluminum heatsink – to do so, I had to turn it upside down and remove the four spring-operated knobs that kept it in place. This, way, I could see the Broadcom BCM53343A0KFSBG chipset which was covered by thermal paste, 256MB of RAM from SKhynix (H5TC4G63EFR) and a Texas Instruments PW548A IC.
Note: The FS S3410-10TF-P has a switching capacity of 24Gbps and a forwarding rate of 30Mpps, which is less than the S3910-24TF offer, but that’s to be expected considering the price tag.

In order to access the configuration page of the FS S3410-10TF-P, you get two options: either use a serial cable and connect the Ethernet switch to a host or by accessing the IP address of the device. As I said before, there is no serial cable in the package and there is a chance that the smaller businesses or home users would not have such a cable laying around. Which is why I decided to go the second route, just like I did with the S3910-24TF. And, as expected, you will need to undergo the same steps to access the configuration page. What this means is that the Ethernet switch has a fixed IP, 192.168.1.1 and, this may either be the IP address of your router or, if you use an Asus router, as I did, it will be in a different subnet. 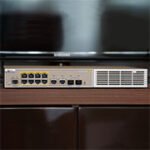