The Asus RT-AX55 and the RT-AX56U are, currently, the only entry-level models that Asus has made available for the consumer public and, while some other manufacturers have simply re-released the same router twice with a different design (to artificially overcrowd the market – check out the Netgear AX10 and the AX20), the RT-AX55 and the RT-AX56U are actually quite different devices. It’s true that both are AX1800-class WiFi 6 routers (the draft stage), so you can expect OFDMA on both bands (ul and dl) and TWT, but neither of the two devices goes above the 80MHz channel bandwidth, so no support for 160MHz. 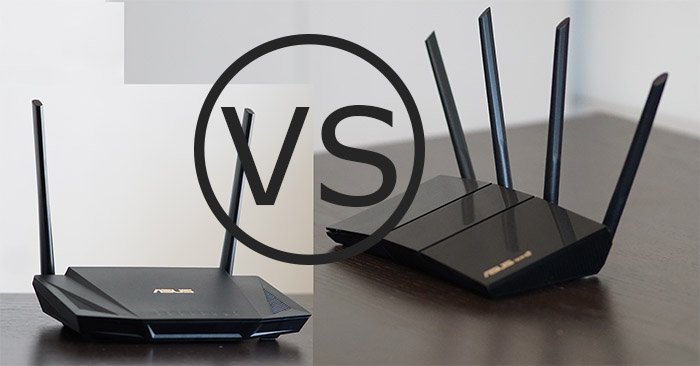 Furthermore, the RT-AX55 has less flash memory and RAM than the RT-AX56U and it does not have any USB ports, removing the option to add any external storage drives (that’s something I saw on other AX1800 routers as well).
Of course, these omissions do mean that the RT-AX55 will have a reduced price tag, but, when I tested the RT-AX56U, it seemed more stable and had a better throughput. Also, the tear-down process of each router has revealed that the Asus RT-AX56U has a more solid construction, so the increased cost may prove to be worth it in the long run.

Sure enough, these entry-level WiFi 6 routers can be a tricky purchase when the best WiFi 5 routers have a similar price and the adoption rate of the new WiFi technology is still nowhere near as widespread as some manufacturers may make you believe. But, if you’re keen on checking out the new tech, but have a fairly limited budget, let’s check which of the two Asus routers will offer the best performance.

Note: You can also check out the individual analysis of each wireless router here: Asus RT-AX56U and Asus RT-AX55.

The manufacturers rarely put much thought in the design of their entry-level models, but the Asus RT-AX56U has a relatively attractive design, nothing too flashy, but still letting you know that this is a new device from a new WiFi generation. And that’s because it shares the same case with the RT-AX58U, minus the antennas and some ports on the rear side. 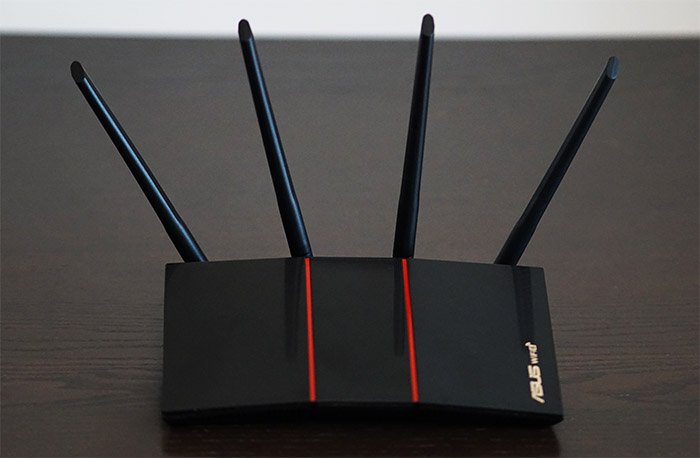 The RT-AX55 on the other hand, was designed with a limited budget in mind. Sure enough, it does have a glossy top and two red bands (no, it’s not a gaming router), while from the rear, there are four antennas that point upwards. The RT-AX56U only has two antennas and, just like on the RT-AX55, they’re not removable – it’s a new trend that I saw on far more expensive routers as well. The case of the RT-AX55 is more lightweight and feels a bit more cheaper than with other Asus routers – it measures 9.1 x 5.3 x 2.2 inches and one of the most annoying aspects is that there are no mounting holes on the bottom of the device. 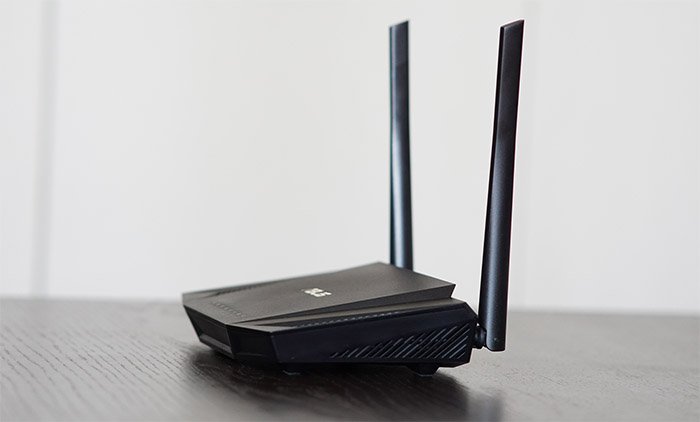 The RT-AX56U does have a couple of dedicated mounting holes on the bottom and, in terms of size, it’s just as compact as the RT-AX55, measuring 8.79 x 5.09 x 1.87 inches, so it won’t occupy that much space from your desk. There are ventilation holes all around the case, which means that the RT-AX56U will not overheat and the good news is that the RT-AX55 behaves in the same manner, easily managing to keep the internal temperature in check. The Asus RT-AX56U has its LEDs positioned on the top of the case and, besides the WAN LED, each LAN port gets one indicator, as well as the two WiFi bands; lastly, there’s the Power LED.

The RT-AX55 has the LEDs almost hidden underneath the protruding front plastic section and the icons are barely visible. Furthermore, just like the Netgear RAX10 and the Archer AX73, there is a single LED for all four ports which is just one step away from simply adopting the single LED approach of the mesh WiFi systems. On the rear side of the RT-AX55, there’s a Reset button, a WPS button, a Power switch, a Power connector, a Gigabit WAN port and four Gigabit LAN ports.

The Asus RT-AX56U is more generous, so, on the rear side, you’ll be able to find a Power port, a Power switch, a Gigabit WAN port, four Gigabit LAN ports, a USB 3.0 port, a USB 2.0 port, a Reset button and a WPS button. It’s pretty much obvious that I do prefer the design of the RT-AX56U and the extra USB ports does give it the upper hand in terms of design.

The Asus RT-AX56U and the RT-AX55 use the same quad-core Broadcom BCM6755 CPU clocked at 1.5GHz, a different switch chipset and the RT-AX55 has less RAM and less flash storage which will show when more clients are connected. The 5GHz and the 2.4GHz WiFi chipsets seems to be the same on both routers, as can be seen in the following table.

When it was released, the Asus RT-AX55 lacked the WPA3 support and the dual-WAN feature was missing, but, to keep ahead of its competitors that didn’t skimp on important features, Asus did add them on a later firmware upgrade. The Asus RT-AX56U had all the expected features from the beginning, which included the highlighted OFDMA and I noticed that all the Asus routers that I have tested so far (which includes the RT-AX55) have the possibility to enable this feature on both bands ul+dl from the Professional section in the web-based interface.

OFDMA splits the channel bandwidth into smaller resource units (RUs) that can vary in size and the connected devices can share one transmission stream. This way, the devices don’t have to wait for their turn and the transmission of smaller packets will be far more efficient. Besides OFDMA, both devices support MU-MIMO (2×2) which has the role of serving multiple clients at the same time and there’s also BeamForming that will focus the signal towards the compatible clients, ensuring that the interference is kept to the minimum.

The problem is, of course the compatibility because the large majority of wireless devices are quite basic and you won’t be able to make use of all the aforementioned capabilities. And that’s also available for the WiFi 6 standard because the adoption rate has barely started (just some flagship laptops and smartphones), so it’s hard to justify paying more for a router that won’t perform better than your older router – that’s the case if you don’t have some WiFi 6 clients in your home. Asus has added an interesting way to make use of older routers, even from the previous generation and that’s by using AiMesh.