The Netgear R6700AX (or RAX10 depending on the region) can be considered the WiFi 6 successor to the Netgear R6700 which was an excellent WiFi 5 router, overshadowed only by the iconic R7000. And while there’s nothing wrong with relying on the nostalgia factor, we already had an AX1800 router from Netgear and things get more interesting when checking out the internal components.

While I haven’t personally tested the RAX20, this websites says that from the internal hardware point of view, it’s pretty much identical to the RAX10, so what’s going on? I am not really sure, especially considering that both devices are available on the European and US market, so welcome to the world of home networking devices, where everything is confusing and nothing makes sense. 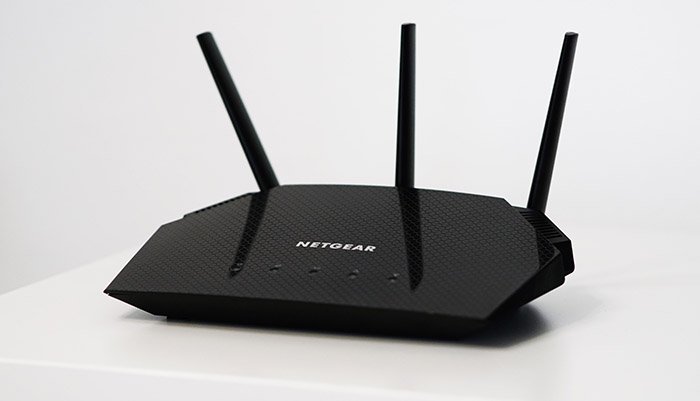 In any case, this is an entry-level WiFi 6 router that will most likely interest a large portion of people that want to check out the newest advances in technology, without breaking the bank, so can the Netgear RAX10 deliver? The good news is that it’s not using the same platform as the RAX40v1 and it’s using the same CPU as the Asus RT-AX55 which I think is its main competitor (unless we also count the AX20..). Other than that, Netgear says that the wireless router does make use of OFDMA, one of the highlighted features of the WiFi 6 standard, there’s 1024-QAM support, MU-MIMO and other interesting features, so let’s check it out and put it to the test.

Unlike the RAX40 which is one of the largest WiFi 6 routers available, Netgear has decided to make its entry-level models a bit more compact, so the R6700AX (RAX10) is almost half the size of the RAX40, measuring 9.27 x 7.26 x 2.25 inches. The case is made of plastic and it’s covered by glossy back finish with a pattern of small triangles (and yes, it’s a magnet for smudges).

I noticed that there are two sections with ventilation cut-outs pointing upwards and, to ensure that the internal temperature is kept in check, Netgear has added vent holes on the rear side (above the ports), as well as on the bottom side, which is almost entirely covered by small holes. 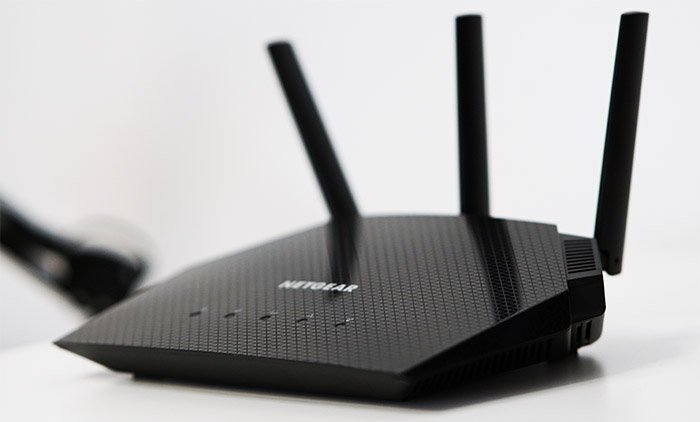 The passive cooling works, so the RAX10 only becomes warm near the middle top and bottom, but it showed no signs that it may overheat, even after a prolonged session of testing. Still on the bottom of the device, there are four silicone feet and two wall mounting holes.
So yes, you have the option to leave the router on the desk and it won’t move from its place (I thought this was standard practice, until I tested the TP-Link Archer AX50) or you can simply mount the device on the wall with its antennas pointing upwards. Speaking of antennas, Netgear has gifted the R6700AX with three short, but thick antennas that can’t be removed (so no chance to upgrade them), but they do have a fairly ample adjustable angle.

On the top of the Netgear RAX10, there are five large LEDs, the first being responsible for showing the status of the Power (solid green means that the router is powered on and blinking amber indicates that the firmware is upgrading or the reset process has been started) and the second LED shows the status of the Internet connection (solid amber means that there is a cable connected, but no link). Next, there’s a single WiFi LED which shows the status of both the 2.4GHz and the 5GHz networks, followed by the Ethernet LED (solid green indicates a connection made at 1Gbps, while solid amber shows that the connection has been made at 10/100Mbps). Lastly, there’s the WPS LED which will flash green after you start the pairing process. 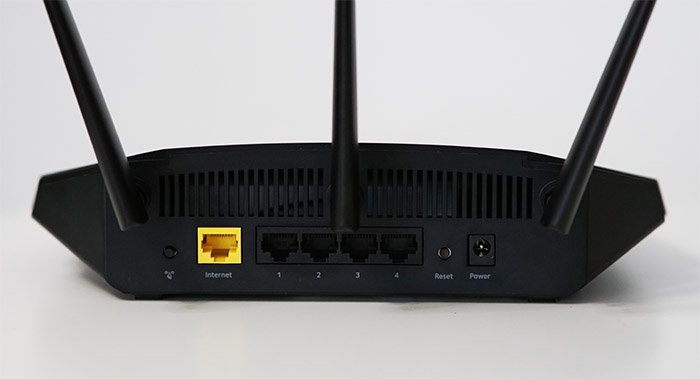 On the rear side of the router, you can find the ports and connectors, and the layout is very similar to the RAX20. There’s a WPS button which sits next to the Gigabit WAN port and then there are four Gigabit Ethernet LAN ports. Further to the right, there is a recessed Reset button (press and hold it for 10 seconds to return the device to its factory settings) and lastly, there’s the Power connector. You may have noticed that there is no Power button, nor a WiFi or at least a LED On/Off switch. And that’s the same as on the RAX20, but things get a bit more depressing since the RAX10 (R6700AX) also lacks any USB ports, so you cannot connect any external storage device. For some strange reason, not only Netgear punishes you if you go for its lower-end models, but Asus does as well with its RT-AX55 (no USB ports).

The tear down process of the R6700AX (RAX10) is relatively painless and, besides deciding to use a special type of screws, it’s very simple to open up the device – as with any other electronic device, be aware that this can void the warranty. That being said, all the screws are positioned on the bottom of the router, so you need to remove the visible screw, as well as the two screws hidden underneath the feet pads located near the front of the device (no warranty seal, but as I said before, you can still void your warranty). Afterwards, detach the top section with a prying tool (should come off easily) and then you will be greeted by the PCB with a large heatsink covering up a large portion of it. To remove the aluminum heatsink, you need access to the bottom of the PCB, but to access it, you need to disconnect the three antenna cables (take a picture to remember where to reconnect them). 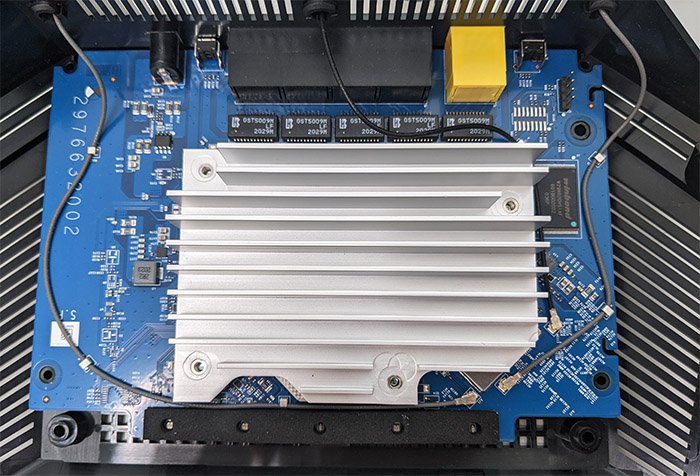 After doing so, remove the four screws from the other side of the PCB and gently detach the large aluminum heatsink. Next, remove the remaining metallic covers to see the components. First, there’s the quad-core Broadcom BCM6755KFEBG SoC which is clocked at 1.5GHz), followed by the Broadcom BCM53134OKFBG Ethernet switch chip, 256MB of flash memory from Winbond (W29N02GVSIAF) and 512MB of RAM from (Winbond W634GU6NB-11), so it’s not just similar to the Netgear RAX20, it’s identical to it. And that’s not the first time that Netgear has behaved strangely in regards to its WiFi 6 router since we also got the RAX40 situation. The manufacturer released the RAX40v1 which was built on the Intel platform and since the performance was subpar, they decided to release a new variant, the RAX40v2 that uses the Broadcom platform. So if you’re one of the unlucky ones which are still stuck with the first version, you may or may not get a replacement.

There are currently only a few WiFi 6 certified routers and, as expected, Netgear RAX10 is a part of the draft stage, but it still offers a healthy amount of features, even though it’s an entry-level model. The most important improvement over the last WiFi generation is the OFDMA (orthogonal frequency division multiple access) which, by default, is not enabled, but it can be for both the 2.4GHz and the 5GHz radios (it seems to be both ul and dl). This feature was developed to offer the means to handle far better the transmission of smaller frames by splitting the channel bandwidth into smaller RUs (resource units) that are then allocated to the simultaneous communication with multiple clients. The size of the RUs can differ depending on the type of traffic. It does seem like the RAX10 has support for MU-MIMO, which is great, but you do need compatible clients to make use of its abilities (and the manufacturers do not like to add it outside their flagship devices). 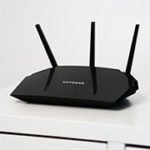