Asus seems to be on the roll with the AX technology and besides the myriad of models from last year, it has now also released the RT-AX82U and the RT-AX86U, the latter being the successor to the RT-AC86U and both routers are focused towards improving the online gaming experience. I managed to get my hands on the Asus RT-AX82U and it’s a very strange looking device, especially built to cater to the gaming community (complicated angles, large front LED).

It’s common knowledge that RGB does increase the performance of any electronic device and whether the manufacturer went overboard to let you know that this is a gaming router, it’s up to everyone’s taste, but on the inside it’s very similar to another gaming-focused router, the Asus TUF AX3000 (it’s also very close to the RT-AX58U). At the same time, the Asus RT-AX82U does come with 1024 QAM support and it has implemented the NVIDIA Geforce Now Cloud Gaming Optimization (not sure whether the TUF AX3000 supports 802.11d link aggregation, but the RT-AX82U surely does).

The problem is that Asus has already announced a WiFi 6E router at the end of this year (and probably more to come next year), so why should anyone invest in a WiFi 6 router right now? It’s true that the WiFi 6 still hasn’t had enough time to settle (the Asus RT-AX82U is still in the WiFi 6 draft stage), but a lot of manufacturers have included AX WiFi adapters into their products (laptops, smartphones), so, if you’re coming from an older standard than AC and have some compatible client devices, then the WiFi 6 will bring you some significant benefits. That being said, let’s have a closer look at the Asus RT-AX82U and see how it performs with both 802.11ac and 802.11ax wireless clients.

While the RT-AX56U and the RT-AX58U had a relatively unobtrusive look, the Asus RT-AX82U is one of the most in-your-face looking wireless routers, sporting a case that’s inspired by sci-fi battleships, featuring sharp angles and various unexpected ‘exhaust vents’. But probably the most interesting design element is the front-facing LED sections (called Asus Aura RGB) that can be customized using the dedicated app (or you can just turn it off). After opening the case, I saw that this light effect is achieved with the help of 22 individual LEDs that shine through a couple of pieces of plastic (that uniformize the light). Even though it has an aggressive look, the case is surprisingly compact, measuring only 10.84 x 7.25 x 6.50 inches which is still a bit more than the RT-AX58U, but far lower than the R7000p which went for a similar design approach a few years ago. Furthermore, the plastic case is covered by a black matte finish and at the back of the router, there are four antennas that can’t be removed, so there’s no way to upgrade them. 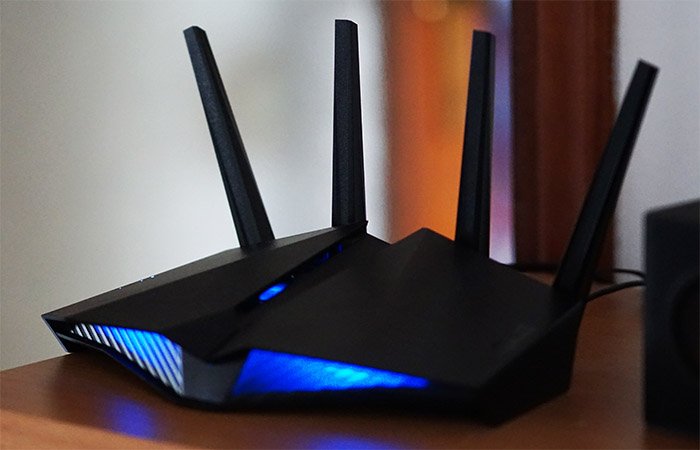 I thought that Asus considered the Asus RT-AX56U or the RT-AX58U too ‘entry-level’ and that’s why it added non-removable antennas, but it seems to be a generalized thing with other manufacturers as well (yes, I’m looking at you, Netgear). On the top of the plastic case, in the middle, Asus has added four cut-outs and there are other ventilation holes on the rear side, while pretty much the entire bottom side is covered by various cut-outs to ensure a proper heat management.

While testing the Asus RT-AX82U, the case got warm on the bottom, near the middle, but it shows no signs of overheating which is always nice to see on a networking device. Both the RT-AX56U and the RT-AX58U could be mounted on the wall, but it seems that the RT-AX82U does not have mounting holes, so the only position available is flat on the desk (more likely the wavy design made it difficult to pull off). The good news is that there are multiple silicone feet to keep the router in place, regardless of the number of connected cables.

As for the LED lights, things are a bit different than with other Asus routers. And no, it’s not because of the front-facing large strip of lights which is there only for cosmetic reasons, it’s because they’re positioned on the left and, while the LEDs themselves are bright enough, the icons are very hard to see. Keeping that in mind, the first LED shows the status of the Internet (when it’s connected, the LED is going to be white, otherwise it’s going to be red), the second and the third will show the status of the 2.4GHz and the 5GHz network and the last LED shows the status of the Power. My unit is a bit strange since the LEDs are in the wrong order – the WAN LED is next to the 2.4GHz network icon – this type of mistake can happen and doesn’t affect the functionality of the device, but I’m not entirely sure whether it’s generalized and I didn’t really expect to see it on a brand such as Asus. If you want to turn the front LEDs off or switch through different patterns, click on the narrow button on the top of the case and to access the rest of the buttons and the ports, we need to go to the rear side of the router.

Here, from the left, there’s the Power port (proprietary, of course), the Power switch, a USB 3.0 port (for connecting a printer or an external storage device), four Ethernet LAN ports (all Gigabit), one WAN port (also Gigabit – and yes, the RT-AX86U does have a 2.5Gbe WAN port), a WPS button and a recessed Reset button. I have to mention that the fourth LAN port is the Gaming port which is set to automatically prioritize the connected device – useful for online gaming.

If you want to open the case of the Asus RT-AX82U, you need to remove five screws from the bottom, but be aware that one of them has a warranty seal which, when removed, can void the warranty. If you’re OK with that, use a prying tool to detach the locking mechanism and you should have a full view of the PCB. As you can see, there is more space inside the case than on other Asus routers, but that’s not necessarily a bad thing since it can help a bit with the heat management (and the device is decently compact). Removing the aluminum covers, I could see that the wireless router is equipped with a tri-core Broadcom BCM6750KFEBG which, just like on the RT-AX58U, it’s based on the 32-bit Cortex A7 core and it’s also clocked at 1.5GHz. Furthermore, I could identify 512 MB of RAM (Nanya 2004 NT5CC256M16ER-EK) which, again, is the same amount as on the RT-AX58U and, going to the other side of the PCB, I could also see the 256 MB of storage memory from Nanya (MXIC A200609 MX30LF2G189C-TI). 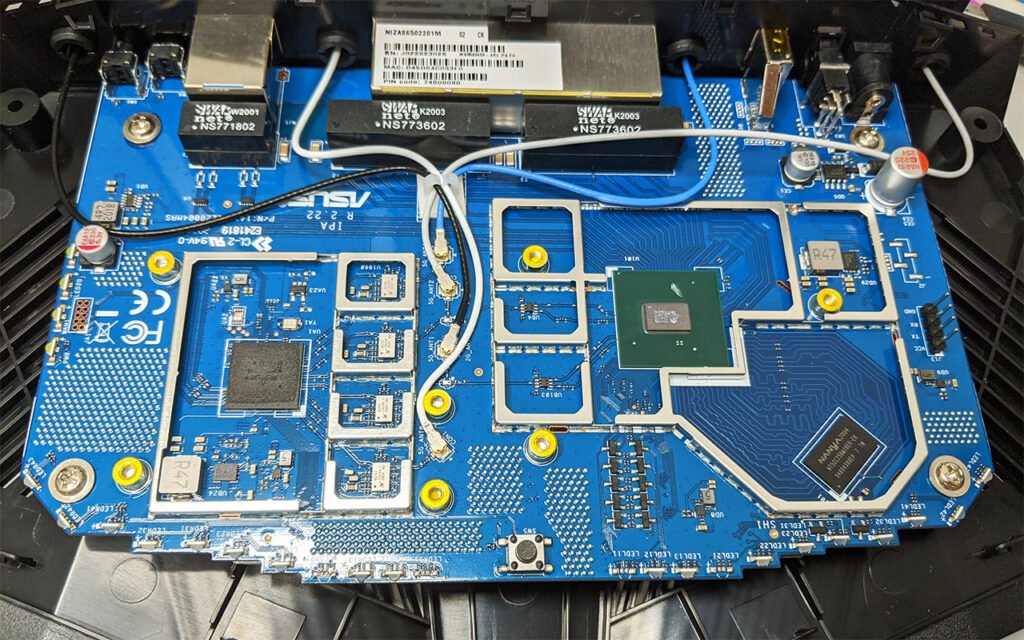 The Asus RT-AX82U has a very similar feature set to the RT-AX58U, with the exception of the 4×4:4 MU-MIMO support and the nVidia GeForce Now Cloud Gaming Optimization. So, there’s still OFDMA which is one of the greatest features to come with the WiFi 6 technology since it splits the channel bandwidth into smaller orthogonal sub-carriers that are then sent to the individual devices in your network, ensuring less latency when transmitting small packets, more network efficiency and, if the receiver relies on battery power, it can last longer. And this closely ties with another WiFi 6 feature which is the Target Wake Time which creates schedules for when each client will expect traffic, greatly improving the battery life in IoT devices. There’s also the 1024-QAM tech which is new to neither the WiFi 5, nor to Asus since it has been implemented in the form of Nitro-QAM in some mid and higher-end routers (such as the Asus RT-AC86U), but there’s definitely some throughput benefit if you have a compatible client (especially when it’s positioned close to the router and the interference is kept to the minimum).

It’s also worth mentioning the 160MHz bandwidth support (which again, I have seen it on some WiFi 5 routers, such as Linksys WRT3200ACM or Netgear R7800), the AiMesh, the MU-MIMO technology for serving multiple clients at the same time and the BeamForming tech for improving the connection with compatible client devices. And that’s the key word with this features, compatibility. Unfortunately, we haven’t properly left behind the 802.11n WiFi standard and to expect that the users will quickly adopt the 802.11ax standard is wishful thinking. And to already see the WiFi 6E creeping in at such a short time after WiFi 6 was barely adopted is going to confuse the customers, which are more likely to just remain with the WiFi 5 routers anyway (probably the best decision at this point, until this mess gets sorted out). I have mentioned that Asus has partnered with nVidia to optimize the RT-AX82U for their GeForce Now Cloud Gaming platform and to take advantage of it, simply connect the wired device to the Gaming Port and it will have a higher priority than any other connected client device (it’s just QoS) – the router also has a Mobile Gaming Mode which you can activate when playing games on mobile. 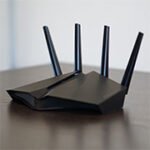