Arris SB8200 is part of the first wave of cable modems to support both the new DOCSIS 3.1 traffic and the older DOCSIS 3.0 standard (which should ease the transition to the newer technology), allowing its users to take advantage of the fastest download speed available from the ISP and supporting bonding of up to 32 download QAM channels and 8 upload channels.

I know that the DOCSIS 3.1 standard is not yet widespread and is just recently being implemented by cable providers, so it may seem that the SB8200 is a bit early (especially for the consumer market), but, in reality, it came just at the right time to help Arris out of the SB6190 mess (because of the Intel Puma 6 chipset latency bug) and to prepare us for that sweet Gigabit+ download speed we’ve been dreaming for years. 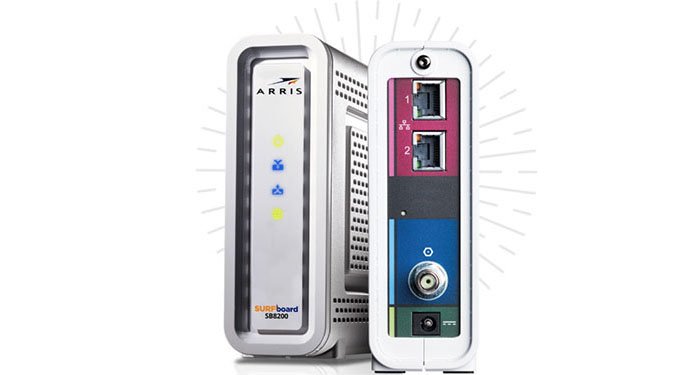 That being said, Arris is still the most preferred cable modem by all Internet Service Providers from the US and, if you need to purchase a new modem, even if you haven’t gotten a Gigabit tier, the SB8200 is definitely one of the most future-proofed devices on the market (and modems tend to stick around for years).

Design
If you take the last four modems released by Arris (from the older Arris SB6141 and SB6183 to the more recent, SB6190 and the latest SB8200), you can hardly tell them apart since they all pretty much share the same design. Arris doesn’t seem to want to change the design formula, so, the SB8200 features the same white, plastic case, covered by a matte finish (does not retain fingerprints). The case gives the impression of two distinct pieces, one external part which wraps around a smaller rectangular piece, leaving narrow canals in-between for a series of ventilation holes. 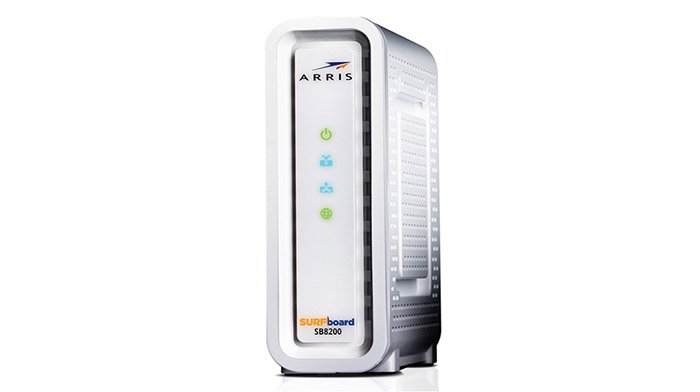 As newer technologies are being developed and immediately implemented into new modems, there’s always the risk that the device would overheat (until developers find the best balance between performance and hardware – it’s usually a lengthy process), but, it seems that Arris took this risk seriously and covered the SB8200, almost entirely, with cut-out which facilitate a better airflow. On the right side of the modem, there is a recessed rectangular band positioned towards the centre with several special spaces which help mount the device on the wall (the same pattern can be found on the left side, for symmetry, but it lacks the wall-mounting spaces).

Although it’s nice to be able to put the modem somewhere else other than your desk and forget about it, I would advise against mounting it on the wall because it can run a bit hot and some air vents can be blocked, so it’s best to leave it some room to breath (also avoid putting it in any enclosed space for the same reason). 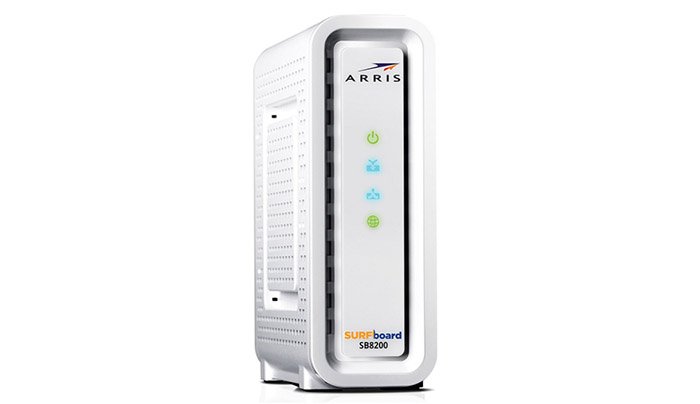 The device is still relatively small (measuring only 5.24 x 5.24 x 1.65 inches) and it is a bit lightweight (weighs 2.1 lbs), but the four feet with rubber pads should add a bit to the stability factor. On the bottom of the SB8200, you can find a small label with info about the device (such as the Serial Number, the MAC ID and the model name), while on the front of the modem, there are four LED lights which show the status of the Power, Receive (if it’s green, there’s a high-speed Internet connection using bonded DOCSIS 3.0 channels, and, if it’s blue, then it uses bonded DOCSIS 3.1 channels), Send (green – DOCSIS 3.0; blue – DOCSIS 3.1) and Online (green signifies that the modem is connected to the Internet).

The LEDs are less intense than on previous generations (no light bleed), but, overall, the device still gives the same cheerful vibe that I came to expect from Arris modems. 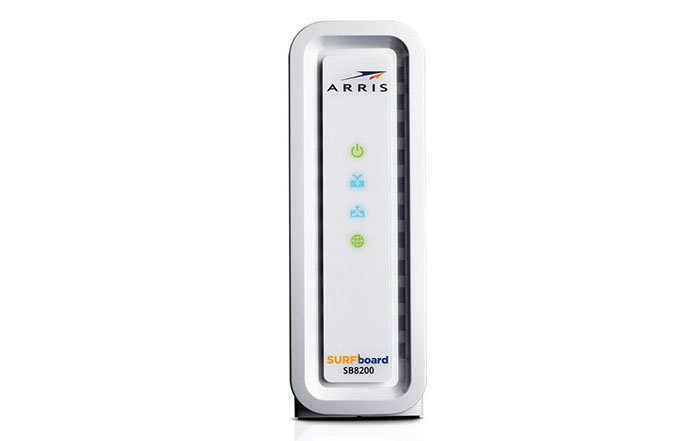 On the back of the SB8200 (on a colourful background), there are two RJ-45 Ethernet ports (along with two LEDs – if it’s amber, then, there’s a 10/100 Mbps data connection and, if it’s green, then, there’s a GigE data connection), one recessed Reset button (press the button for 3 to 4 seconds to reboot the modem or press the button for 10 seconds or more to return the device to factory default settings), a Cable Connector and the Power Port.

It’s quite unusual to see two Ethernet ports on a cable modem and the reason Arris has added them is to allow the connection of two devices at the same time (the ISP has to provide an additional IP address for the second device – ISPs don’t provide additional IP addresses to home users, as far as I’m aware, so only business owners can take advantage of this feature), but there are additional possible applications, such as creating a failover system (it’s obvious that you would need a second carrier for it to work) or link aggregation. 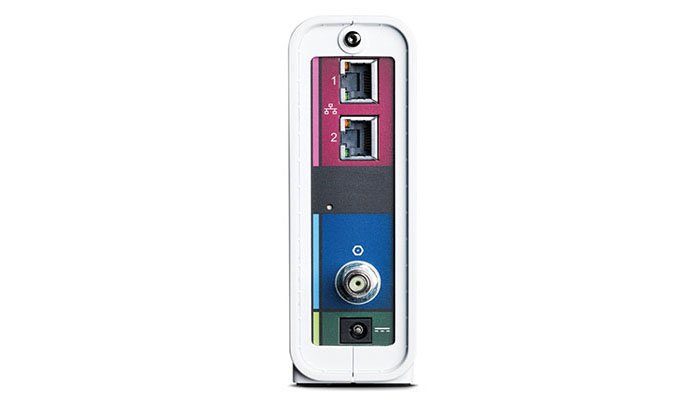 I don’t think the SB8200 will go with the IEEE 802.3ad Link Aggregation for the usual consumer (which creates a single high-bandwidth link interface by grouping more than one Ethernet interfaces at the physical layer), although it would be interesting to send speeds up to 2 Gbps using both Ethernet port (dual-link) at the same time towards your router.

Hardware
Inside the case, Arris has equipped the SB8200 with a Broadcom BCM3390 chipset (a much needed change from the SB6190’s Intel Puma 6 chipset), 3 GB of RAM, 128MiB S34ML01G200TFV00 Spansion flash memory NAND and 16 MiB Macronix MX25L12805D SPI NAND flash memory. The SB8200 should be able to handle downstream bonded channels up to 32 SCQAM or 2 OFDM and upstream bonded channels up to 8 SCQAM or 2 OFDMA.

Now, let’s discuss a bit the ‘Download speeds up to 5Gbps*’ written on the box. As you can see, there’s a small asterisk symbol which clarifies that the DOCSIS 3.1 standard supports 5+ Gigabit download speeds and that the output of the Gigabit ports is 2Gbps combined. So, this is a clear indication that the SB8200 can go up to 2Gbps, but only through link aggregation (some may argue that, in the future the modem may support 2.5Gbps on each port, so it could technically reach the advertised 5Gbps, but, no, the internal hardware does not support it).

Compatibility and Performance
Arris SB8200 is a relatively new device, but it is compatible with the major Internet Service Providers, such as Comcast (Xfinity service) and Cox, while Charter, Time Warner and Bright House should also add it to the compatible modems list in a short period of time (pending status). As always, before purchasing this cable modem, you need to make sure it is compatible with your ISP (you could verify their website for a full list of compatible modems or just call them) and, since the SB8200 comes with some novelty features, you need to make sure you actually need such a device and that it is (or will be) suitable for the data plans that your ISP can provide (1Gbps or more, when it become available).

This brings us to the evergreen dilemma: should you buy your own modem or rent it from your cable provider? Each choice comes with its own set of advantages and disadvantages. As expected, Internet Service Providers are not very happy when you purchase your own modem, so, most will be reluctant to help you with any problem that they may think is modem related (if there’s a problem with the connection, your modem is the first to get blamed). Furthermore, you may or may not get the latest firmware updates. Purchasing your own cable modem is the cheaper option on the long run because some ISPs have a bad habit of requesting a large sum every month for their rentals and you would get your money back in less than an year and a half (sometimes, even sooner).

As I said in the previous section, the maximum theoretical output should be 2Gbps if link aggregation is involved, but, most people will want to use it with a 1Gbps download data plan, so, in reality, you can get an average of 950 Mbps (what a Gigabit Ethernet port can usually deliver). At the same time, even if the 1Gbps speed is not available in your area, you could still take advantage of the extra channels, especially if you have problems with congested nodes. As a side note, I was delighted to see that the latency problems that plagued the previous Arris modem are gone and that happened because the SB8200 uses a Broadcom processor, instead of the Intel Puma 6. 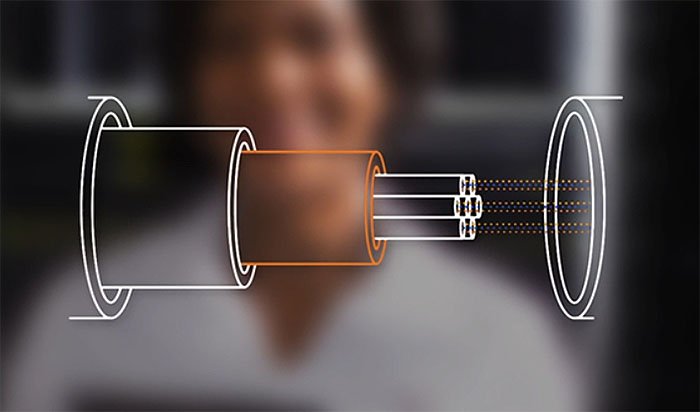 Arris SB8200 does not have any built-in wireless capabilities and you would need a wireless router to connect it to the modem. At this moment any router should do just fine (be aware that an inexpensive one could become a bottleneck), but, in the future, you may need to look at a router which supports the full power of the SB8200 (one that handles link aggregation).

Setup
The hardware installation process is simple and straight-forward: use a coaxial cable to connect the modem to the cable wall outlet, an Ethernet cable to connect the SB8200 to a router or computer PC and the power adapter to power up the device. Next, if the activation process isn’t done automatically, you need to contact your service provider to activate the modem (to check if everything is working properly, just open a browser and type a valid URL).

Afterwards, you can visit the Cable Modem Web Manager by typing the LAN IP address (192.168.100.1) in any web browser and you’ll be greeted by the Status screen, which displays the Startup Procedure status (such as the Acquire Downstream Channel, Connectivity State or Boot State) and the Downstream and Upstream Bonded Channels. You can also access the Product Information (displays software and hardware-related information – Standard Specification Compliant, Hardware and Software version, the MAC address, the Serial Number and the Up Time), the Event Log, the Addresses (displays the Serial Number and the HFC MAC Address), the Configuration and the Help sections.

Besides the web-based utility provided by Arris, you can also gain access to a Spectrum Analyzer page by visiting 192.168.100.1:8080 and, when prompted to insert the username and password, type admin and password (to access it, you need to use Google Chrome or Safari and you need to make sure that the port is opened and not blocked by your router). The Spectrum Analyzer is very useful for identifying any cable modem issues on the fly, by displaying a live status of the radio frequency and by allowing you to change various parameters (adjust the Frequency, Span, Amplitude, Bandwidth and the Measurements).

Conclusion
The SB8200 is what Arris needed to help it regain the customers’ trust, it is a well built device, it has great internal hardware, it supports the new DOCSIS 3.1 standard and it promises a fantastic speed performance in the future. Now, does the usual consumer actually need such a device right now? At the moment, not really, since DOCSIS 3.1 is just being implemented by the ISPs and to take advantage of the two ports, you would need to use link aggregation, which is something that should be implemented in the future. Overall, this is a very good device and definitely one of the most future-proofed cable modems on the market (alongside Netgear CM1000), but its price tag makes it more suitable for tech enthusiasts, than the average user. 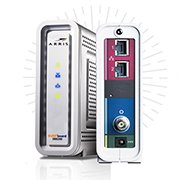