The TP-Link EAP610 and the EAP615-Wall were launched about the same time and, while they’re both AX1800-class wireless access points, they try to achieve slightly different goals. Up to a certain point because the focus still remains on providing a strong and stable throughput over a large area.

Even so, while the EAP610 is your regular ceiling-mount AP, the EAP615-Wall is designed to be mounted on a wall and provide pass-through PoE for a secondary device. Don’t expect to chain-connect a couple of PoE access points because the power that’s actually sent is very low, underneath 12W, so there’s only a handful of options available. 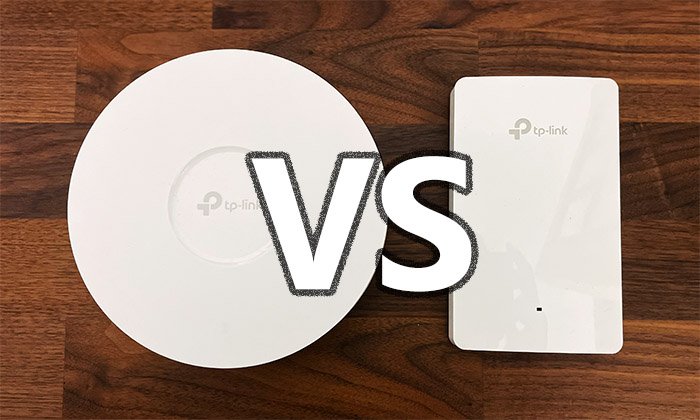 Let’s not brush off the EAP610 that easily because this is the second version that got shrunk to better compete with the likes of ECW220S and the WAX630S, both very compact access points.
Of course, both the TP-Link EAP610 and the EAP615-Wall support OFDMA, MU-MIMO and both can connect to the Omada controller. There’s also the possibility to use seamless roaming and, in the case of the EAP610, to mesh it with other compatible access points.

Still, we’re dealing with two devices built on very different platforms (MediaTek vs Qualcomm) and, while the EAP610 seemed to have the upper hand on paper, I was surprised by how well it actually performed with both WiFi 6 and WiFi 5 client devices. So, let’s put them side by side and see which AP is the better one.

Note: You can also check out the individual analysis of each WiFi 6 access point here: TP-Link EAP610 and TP-Link EAP615-Wall.

I have mentioned that the TP-Link EAP610 has gotten a smaller case which is excellent news especially since the heat management is still fairly decent and, no, there were no radical design changes, the case simply shrunk, while retaining the same look. So, we’re dealing with a 9.6 x 9.6 x 2.5 inches access point that has a metallic bottom and a plastic top, all covered by a white matte finish. But, when putting the TP-Link EAP610 and the EAP615-Wall next to each other, the latter is still more compact.

Indeed, when a device measures only 5.6 x 3.4 x 0.8 inches, there is very little competition but this did come at the cost of a few more degrees F since the case is completely sealed off. And no, it’s not built for outdoors conditions, that’s what the EAP610-Outdoor access point is for. Mounting the TP-Link EAP610 is simple since all you need to do is attach the bracket on the ceiling, connect the PoE cable (optionally, also the power cable) and simply rotate the device into place.

The TP-Link EAP615-Wall doesn’t differ that much in this respect because the same rule applies for both AP because. Ideally, you need to feed a cable through the ceiling or in our case, the wall, but the EAP610 does allow some leeway in terms of positioning, while the EAP615-Wall does not. It requires a wall junction box to be properly mounted on the wall, so keep that in mind before purchasing it.

The TP-Link EAP610 has a single LED to show the status of the access point and it will turn on if everything is in working condition, otherwise, if it encounters an error, the LED turns off. The TP-Link EAP615-Wall has the same approach, so there is also a single LED. But, in terms of ports, the EAP615-Wall is better equipped, sporting not one, but four Ethernet ports, the first two being Gigabit and used for connecting client devices, while the third is PoE Out (yes, also Gigabit). The PoE In Ethernet port is on the rear panel of the AP.

I know that TP-Link mentioned that the PoE output can go up to 12W, but I had some issues powering up even some of the more basic PoE devices, so I am fairly sure that the actual output barely exceeds 10W. The TP-Link EAP610 has a single Ethernet port since the assumption is that you can’t or won’t connect wired-only client devices using a cable hanging from the ceiling (which is a fair assumption) and it’s also Gigabit.

There is also a Power port if you don’t want to use PoE, an option that’s missing from the EAP615-Wall which is stuck with using just PoE for power.

The TP-Link EAP615-Wall relies on the dual-core 880MHz Mediatek MT7621DAT chip which seems to be a step down from the SoC used by the TP-Link EAP610 and there is also less RAM and storage available. There are 128MB from Mediatek (MT7621DAT) and 16MB NOR flash from XMC (QH128AH16).

As for WiFi, the access point uses the Mediatek MT7905DAN 802.11a/b/g/n/ac/ax 2×2:2 chip for the 5GHz radio band and the Mediatek MT7975DN 802.11b/g/n/ax 2×2:2 chipset for the 2.4GHz radio. Based on these specs, the TP-Link EAP610 should be more powerful than the EAP615-Wall, but the actual wireless tests may yet paint a different picture, especially in regard to the single client performance. Also, the extra RAM do matter if you intend to run additional applications, such as VPN.

TP-Link uses pretty much the same set of WiFi performance-enhancing features on all its access points, especially the entry-level ones. So, both the TP-Link EAP610 and the EAP615-Wall support OFDMA which is one of the highlighted features of the WiFi 6 standard, having the role of serving multiple client devices at the same time on the same channel using RUs (resource units), but know that you won’t see the actual benefit unless you’re in a very dense WiFi environment, with lots of other APs and a huge amount of compatible client devices.

The MU-MIMO is also present, as well as BeamForming, but I assume that what you’re most interested in is the mesh technology. The implementation on the TP-Link EAP610 allows you to use any unit as a mesh node or main AP, so you can roam between access points without noticing any disconnections. Obviously there is more to that because there’s also the path optimization and self-healing technique. But the TP-Link EAP615-Wall has been a bit weird in this regard.

When I tested it, I quickly brushed off the compatibility since I saw that I could enable the mesh function in the controller, but it doesn’t see to be actually supported. The logic behind this choice is for security reasons since the targeted audience for the wall units is mostly anything related to the healthcare facilities, where roaming can become a security issue. Then again, the sys admins can just turn that feature off.

In any case, the TP-Link EAP615-Wall still does support Seamless Roaming, so, as long as the client device supports 802.11k/v, you should be able to move from AP to AP in a seamless manner. Just be aware that the Omada controller is required for this function to be enabled. Lastly, know that the TP-Link EAP615-Wall does not support the AI Roaming, while the EAP610 does support it. Now let’s talk a bit about the PoE pass-through.

TP-Link says that the EAP615-Wall should be able to power up devices that require up to 12W (or 13W in the EU). But, during my tests, the AP wasn’t able to power up any device, even if it didn’t require that much power. I tried it with PoE cameras, the Omada OC200 controller and even the EnGenius SkyKey I, and it didn’t work.

If you read the individual analysis of the TP-Link EAP610 and the EAP615-Wall, you know that I tested these two wireless access points in a very similar manner. The AP would be connected to a PoE switch (which powers it) and then I connected a server PC to the Ethernet switch as well.

Afterwards, I took three client devices, one was WiFi 6, while the other two were WiFi 5 devices. This way, I could more clearly see the difference between the two standards. Additionally, I also included the attenuation since, even if the distance seems like the better way of comparing the performance between two or more AP, it’s difficult for the user to reproduce the same throughput values inside their homes. That’s because the interference will be very different, so the attenuation remains the more solid and objective way of seeing the proper difference between the the TP-Link EAP610 and the EAP615-Wall.

That being said, connecting the WiFi 6 client device (Intel AX200) to the TP-Link EAP610 (80MHz) showed that it’s possible to go up to 702Mbps upstream and 363Mbps downstream at 5 feet. The throughput had a gentle fall at 15 feet, but it did go down quite a bit after going past the 30 feet limit. Still, at 70 feet (-82dB attenuation), I still got 112Mbps up and 48.7Mbps downstream, which is excellent.

After connecting the same AX200 client device to the TP-Link EAP615-Wall, I noticed that, while the throughput wasn’t as good at 5 feet, it did prove far more consistent up to 45 feet. At 70 feet (-87dB),I measured an average of 50.8Mbps upstream and 14.2Mbps downstream. Does that mean that using the Mediatek platform and a less powerful chip is better? It depends on the number of client devices. If you don’t connect that many compatible WiFi 6 devices, then you should see an overall better performance with the TP-Link EAP615-Wall.

But, if you need to go above, let’s say, 20 client devices, the EAP610 should still be more stable. Switching to the WiFi 5 client devices, I noticed that, while there was a difference in terms of performance, it wasn’t that radical, well, up until reaching the 70 feet mark. That’s where the TP-Link EAP615-Wall either had an inconsistent performance or completely disconnected.

Keeping the same system as before, I connected the WiFi 6 client device to the 2.4GHz network and I did see a slight advantage for the TP-LInk EAP615-Wall, and it’s interesting to see that this advantage has remained valid even after testing the performance of the two WiFi 5 client devices.

And that’s excellent news considering that the TP-Link EAP615-Wall may end up connecting to client devices from the older generation a lot more (due to being installed in potentially more industrial complexes).

Both the TP-Link EAP610 and the EAP615-Wall offer a stand-alone mode which is pretty much identical on both devices. And it’s not there just for status info, no, it does offer a fairly comprehensive set of options. So you’re not actually completely dependent on the manufacturer’s severs, such as the case of the EnGenius APs (for example, the ECW230S). To reach the Omada controller, I relied on the OC200 which I connected the PoE switch that powered both access points – the EAP615-Wall can also provide one of its Ethernet ports.

The interface is identical for all Omada devices and, as expected, the dedicated section is also the same for the TP-Link EAP610 and the EAP615-Wall. And it’s worth mentioning that TP-Link has taken a lot of inspiration from the UniFi controller which is a great thing if you want to move away from Ubiquiti. TP-Link’s offering is obviously more inexpensive.

Despite both being AX1800-class access points and sharing a lot of elements and technologies, the TP-Link EAP610 and the EAP615-Wall target a very different demographic, so, depending on your needs, one access point is going to match your expectations better than the other. If you need to create a larger network in an office where the APs can go on the ceiling without needing to connect wired clients, then the TP-Link EAP610 is the better choice. Otherwise, healthcare facilities seem to be the targeted audience for the EAP615-Wall, but then again, if you have a couple of client devices that need to be connected via wire and don’t mind mounting the wall partially in the wall, then you can also give this AP a shot. Just be aware that some of the features are missing, such as the mesh tech and the AI roaming.