The EnGenius ECW230S is currently one of the two WiFi 6 access points that make use of the WIPS and Zero DFS radios to dramatically improve the way the system admin can monitor the network by getting a better understanding of the channel utilization, the live clients and some other network activities.

But another aspect of this refreshed version is the AirGuard security tools that help detect malicious attacks, rogue SSIDs, evil twins and even RF jamming. So, while the EnGenius ECW230S does look identical to the ECW230 in terms of design, some adjustments have been made at the hardware level to ensure that some of these feature can work. But yes, in most part the ECW230 and the ECW230S don’t really differ that much. 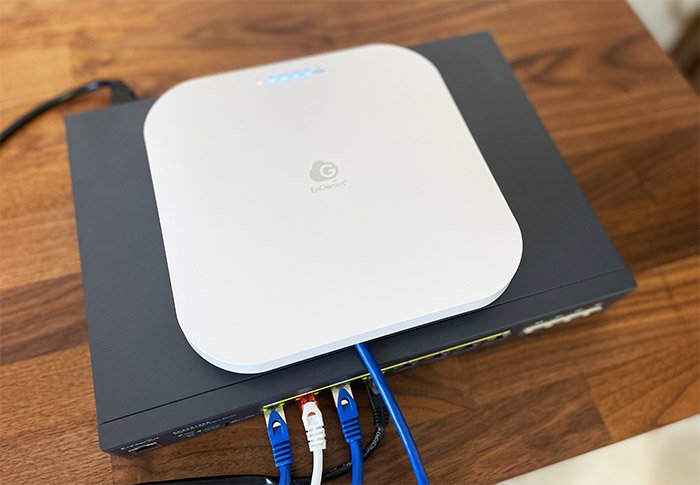 You still get the 2.5GbE Ethernet port that supports PoE, MU-MIMO 4×4 and the mandatory OFDMA tech to help with the denser networks. Furthermore, there is support for the Cloud management platform which allows the easy monitoring and management of large networks all over the world and there is also support for creating a mesh network alongside other EnGenius wireless access points.

If you put the EnGenius ECW230S and the ECW230 next to each other, you’re not going to be able tot tell them apart immediately. Both measure 8.27 x 8.27 x 1.31 inches (20.5 x 20.5 x 3.3cm) and both devices use a plastic top plus a metallic bottom for the case. And it’s a really well thought out design, the case is slim, it looks good on the wall, so it’s better than probably 90% of other access points on the market.

Of course, the plastic piece is covered by a white matte finish, so it will fit in on the ceiling, even if there are some LEDs pointing down. You can turn them off if you want, but they do serve the same function as on the ECW230. You get the Power LED (flashes oranges if you haven’t paired the EnGenius ECW230S to the controller) followed by the LAN LED and then there’s the 2.4GHz and the 5GHz LEDs (these other three LEDs should be solid blue). And then there are two additional LEDs that were not on the ECW230.

That’s right, this is the first design element that differentiates the EnGenius ECW230S from the ECW230. The first LED is responsible for the status of the scanning radio and the second LED will light up to show the status of the Bluetooth radio (BLE 5). If you turn the EnGenius ECW230S around, you’ll notice the second differentiating element, the metallic piece of the case. Instead of being smooth, as on the ECW230, it’s now ribbed and the entire case feels more robust due to the increased weight.

Indeed, the EnGenius ECW230S weighs 1.34lbs, a bit more than the ECW230. Everything else, such as the mounting ears and the ports position is the same. You get a Reset button (hold it for 10 seconds to return the access point to its default settings), a 2.5GbE Ethernet port (supports 802.3af/at) and a DC 12V port in case you want to connect it to a power adapter. There was no PoE adapter in the package, but you can purchase a separate one or just go with an PoE Ethernet switch.

What about the heat management? The ECW230 was running a bit hot to the touch which makes sense considering that the bottom-placed metallic plate has the role of taking the heat away from the chips. And the same remains true for the ECW230S as well considering that it’s even more crowded inside the case. As you can see from the photo, it can get hot to the touch, but even so, I didn’t see any throttling in action.

I had no problems opening up the ECW230, but things weren’t that smooth with the EnGenius ECW230S. After removing the four screws, I attempted to detach the top cover, but the manufacturer went with an unorthodox approach when it came to the Bluetooth antenna. They attached it to the plastic case, which is fine, but the connector was glued to the case as well, which I am not sure it was the intended effect.

It won’t have any impact on the functionality of the access point, just annoying to open up. The rest of the antenna layout is pretty much the same as on the ECW230, but I noticed something strange, there was an antenna loose on the PCB. What happened?

When I opened the lid, the antenna got detached – I used better glue when I put it back together. The PCB is similar to what I saw on the ECW230, but it’s not identical. At the top, there were no notable chips, so I turned the board upside down.

The EnGenius ECW230S uses pretty much the same wireless performance-enhancing features as the ECW230, so there’s the mandatory OFDMA which helps a lot with dense networks. And that was mostly the point of the WiFi 6, not to outdo the WiFi 5 devices in terms of throughput since the wireless access points from that standard were fast enough already.

But the idea is to more efficiently handle a far larger number of clients at the same time. That’s where OFDMA comes in to limit the interference and improve the bandwidth utilization. Then, there’s the MU-MIMO which has to be on all newer networking devices – it’s a nice feature to have since it can ensure that multiple clients can be served at the same time.

The only problem is that you need compatible clients and only a handful can actually use it to its maximum potential (I am not talking about some 2×2 smartphone). I also saw that the mesh technology has been included as well which makes sense if you want to interconnect multiple EnGenius access points and make them behave as a single network. This way, the compatible client devices can roam seamlessly between nodes, so the user experiences no disconnections at all.

As for the client devices, I used three, one is a computer equipped with an AX200 WiFi 6 adapter, another is a WiFi 5 device equipped with an Intel 8265 and the last is Pixel 2 XL smartphone that I keep on reviving mostly for this specific test. So, on the first test, I connected the AX200 client to the EnGenius ECW230S 5GHz network (80MHz) and I checked the throughput based on both the signal strength and the distance between it and the server.

I am well aware that despite sharing a large amount of hardware with the ECW230, when it comes to the ECW230S it’s like testing a completely different device. How come? I think that it’s not the access point, it’s everything else. The ECW230 was tested in a different location and when I did so, the focus was on the distance and less on the signal strength (attenuation) and interference.

I then had to move to a new location, so, testing the EnGenius ECW230S shows different results because the home layout is different and there is a diverse amount of interference. Which is why I have added the signal strength graphs into the newer articles – to be able to maintain a good reference between different models. This is something that other publications should do as well, it’s less important to make an AP comparison based on distance and more imperative to focus on the signal strength. 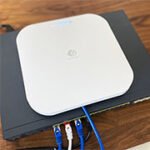