Ubiquiti has made available its fifth gen WiFi 6 access points about a year ago and among them, the Ubiquiti UniFi U6-LR was the most promising in terms of coverage, but how does it compare to one of the best WiFi 5 APs, the Ubiquiti nanoHD? And should you consider upgrading if you haven’t yet fully transitioned your client devices to WiFi 6?

Despite being (WiFi) generations apart, the Ubiquiti U6-LR and the nanoHD have a lot in common since both devices use the Mediatek platform and both access points rely on 4×4 MIMO antenna configuration for the 5GHz radio band. The design is also fairly similar, although one is bigger than the other, and, as expected the Ubiquiti UniFi U6-LR and the Ubiquiti nanoHD can be paired to the UniFi controller. 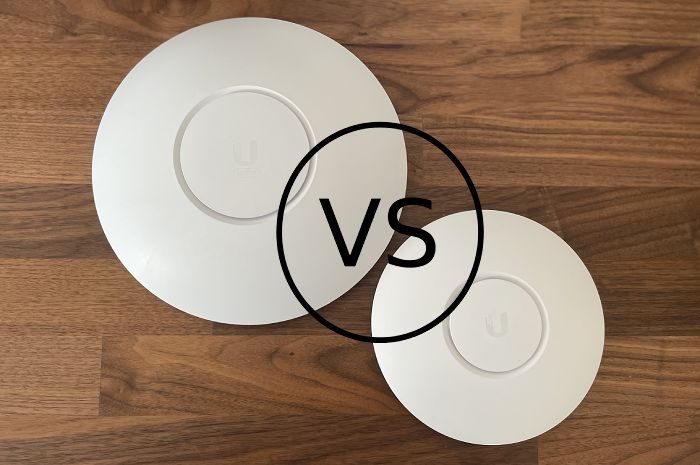 But, there are also lots of differences since one AP is WiFi 6 and the other is WiFi 5. The most important one is the OFDMA tech, even if it’s just enabled for the 5GHz band because it can make a difference in very dense environments with lots of APs and client devices.

The CPU, RAM and storage is also better on the U6-LR, but the PoE power consumption is also higher. Even so, probably the number one concern is the lack of widespread adoption for the WiFi 6 standard at the client device level, for now anyway. And that begs the question on whether you should invest in a WiFi 6 AP such as the Ubiquiti U6-LR or skip it altogether while waiting for the WiFi 7 and keep using the Ubiquiti nanoHD. Let’s find out.

Note: You can also check out the individual analysis of each WiFi 6 access point here: Ubiquiti U6-LR and Ubiquiti nanoHD.

I really liked the direction that Ubiquiti took with the nanoHD since, at 6.30 x 1.29 inches, it has to be the most compact access point that the manufacturer has made available. But the fifth gen made Ubiquiti stumble and they reverted to the large circular cases, so the U6-LR is way larger, measuring 8.66 x 1.89 inches.

The interesting thing is that the U6-Pro has a smaller case, not as small as the nanoHD, but it’s a sign that Ubiquiti finally calmed down after switching to the WiFi 6 standard. If we ignore the size, both the Ubiquiti U6-LR and the nanoHD have the same, dare I say iconic design.

There’s the saucer case covered by a white matte finish and the LED ring always shining down on us. From the ceiling. These two access points can only be attached on the ceiling (I suppose it will work on the wall as well), and that’s because there are no feet to keep them steady on a desk.

Ubiquiti has made mounting their access points very simple despite seemingly having complicated accessories, so that’s a plus (for both APs). It was interesting to see that the Ubiquiti nanoHD is not advertised as suitable for outdoor conditions, but the U6-LR is IP54-rated, so you can technically mount it outside. Just keep it away from direct sun and rain because I do not trust that these devices can actually withstand harsh outdoor conditions for prolonged periods of time.

But, even if there is no IP rating, the Ubiquiti nanoHD still doesn’t have any openings and, just like with the U6-LR, the case seems to be completely sealed. How does that fare for the temperature?

Another popular Ubiquiti access point, the UAP-AC-Pro had some issues with the heat management, but the nanoHD was far better in this regard. Sure, the Ubiquiti U6-LR performs a little bit better, but considering the size of the nanoHD, I would say that the access point has a good heat management. Both of them do, actually, so don’t worry about having very hot access points on your ceiling.

The LED is pretty much the same across generations and I don’t really mind since why fix what’s not broken. And yes, both the Ubiquiti U6-LR and the nanoHD will have a flashing white LED when they’re starting up and, as soon as the APs are connected to the UniFi and to the Internet, the LED will turn solid blue. As for the ports, both access points offer a single Ethernet port and a recessed Reset button (positioned on the rear side of the devices).

And, while you’d be justified to believe that the U6-LR should have at least a 2.5GbE port, well, that’s not the case at all. No, Ubiquiti ignored its competitors (ECW230S and the WAX650S) and used Gigabit ports on the U6-LR, the same as on the nanoHD.

The Ubiquiti UAP-nanoHD is the first access point that the manufacturer had the courage to switch platforms and, while a lot of people were skeptical about whether the device will perform at least as well as the UAP-AC-Pro, it seems that the AP has managed to rise up to its predecessor and still remain a good option even today for SMBs.

If the admins were bold enough, it would have been decent even in a more corporate environment. That is until the WiFi 6 entered the game and the Ubiquiti U6-LR was essentially designed as a replacement (at least price-wise).

That being said, I did open up both wireless access points and, as you can see, the Ubiquiti nanoHD sports a dual-core Mediatek MT7621AT T937-AMTH MIPS CPU clocked at 880MHz which seemed decent enough a couple of years ago, but may raise some eyebrows today (we will see during the wireless test that it performs decently well). Besides the CPU, the nanoHD also uses 128MB of RAM from Winbond (W632GG6MB) and 32MB of NOR flash from MXIC (MX25L25635FMI).

And I am not talking about the actual price tag of the device (both the U6-LR and the nanoHD cost pretty much the same at the moment of writing), it’s about the power consumption. The nanoHD requires a maximum of 10.5W from a PoE switch or adapter which is excellent considering the wireless performance, while the U6-LR needs almost double that amount, maxing out at 18.5W which is still lower than the power hog WAX650S, but still needs a lot more than its predecessor.

The Ubiquity UAP-nanoHD was developed to offer one of the most complete package of features and it was impressive until the WiFi 6 showed that we can go father (wait until you see what the WiFi 6E and the 7 has to offer). Indeed, the AP offered 160MHz channel bandwidth, the MU-MIMO technology, as well as the Beamforming, all requiring compatible client devices, but in 2022, this is less of an issue – don’t get your hopes too high because the market is still underserved in this regard.

The Ubiquity U6-LR can also go up to 160MHz (channel bandwidth) and it offers pretty much all the features of the nanoHD, but it does come with a few new ones. And yes, I am talking about the OFDMA technology which aims to solve some of the issues caused by overly dense networks where the data transmission latency gets very high (since everyone needs to wait its turn on the channel).

The idea is to divide the channel into multiple resource units which can then be used to transmit data to multiple devices at the same time. It’s a fantastic technology, but know that you won’t see any benefit unless there is an unusually high number of APs in your area and you use WiFi 6 client devices. So, I suppose it would make a lot of sense in a healthcare facility, a hotel and even offices. But I am not going to deny that even the regular apartment buildings may have issues if everyone is broadcasting the router signal at its maximum.

Obviously, the better benefit would be the actual switch to 6GHz, but, while some WiFi 6E access points are available already (such as the Zyxel NWA220AX-6E and the EnGenius ECW336) and even some WiFi 7 APs are on the way (from TP-Link, at least), there is almost no adoption at the client device side and some compatibility issues need to be ironed out (such as Microsoft’s stupid move to block 6GHz for any Windows version underneath 11). Before moving on to the tests, let’s talk a bit about the antennas.

I have tested the Ubiquiti nanoHD more than two years ago and, considering that I have changed the testing procedure a bit since then, I simply retested the device to create a better comparison between it and the U6-LR. This involved connecting the access point to a PoE switch which was, in turn, connected to the router via cable. And then I connected the wireless client devices to the 5GHz network (160MHz channel bandwidth) of the Ubiquiti nanoHD and the first one that I used was the laptop equipped with an Intel AX200 adapter (WiFi 6).

Even if the AP is not WiFi 6, it should still be able to reproduce the best possible results due to it being backwards compatible. This way, I could see that at 5 feet, the throughput was 629Mbps upstream (-41dB) and 346Mbps downstream. The throughput fell quite a bit after reaching the 45 feet point (-77dB) which makes sense considering that the 160MHz channel bandwidth is easily crippled by interference, but it still managed to reach 31.4Mbps upstream and 13.7Mbps downstream at 70 feet (-87) which could be somewhat usable.

The same client device performed miles better on the Ubiquity U6-LR and it was expected considering the actual compatibility with the WiFi 6 standard. At 5 feet, I measured an average of 888Mbps upstream and 546Mbps downstream (-35dB attenuation in the same conditions as the nanoHD). At 70 feet, where the attenuation goes to -88dB, the client device still connects to the U6-LR, although barely.

Upstream, I saw an average of 14Mbps and downstream, it was 1.4Mbps. Switching over to the 80MHz channel bandwidth, we do see a slight decline in performance, mostly near the AP, which makes sense if you understand the advantage that the 160MHz channel bandwidth can bring to the table.

But, it does require a pretty much interference-free medium to operate properly – which is why I look forward to the wide adoption of the 6GHz radio. Let’s talk numbers: at 5 feet, I saw an average of 757Mbps up and 488Mbps downstream, while at 45 feet, it was 207Mbps up and 167Mbps down which is impressive. At 70 feet (-86dB) things weren’t that great and I saw an average of 17.9MBps upstream and 6.7Mbps downstream.

I think it’s cute that Ubiquiti calls this AP long range since there are WiFi 6 access points that reach farther, even at a similar price tag. I know that the comparison so far has not been that fair since the nanoHD is a WiFi 5 access point, but you still got an idea about what to expect when your client device is WiFi 6. To level the field a bit, I used a WiFi 5 client device, the laptop that is equipped with the Intel 8265 2×2 WiFi card.

This way, while it was connected to the Ubiquiti nanoHD, I saw that the average throughput at 5 get was 565Mbps upstream and 301Mbps downstream. Moving farther from the AP, at 45 feet, the average speed was 123Mbps up and 97Mbps downstream. At 70 feet, the throughput was 5.5Mbps upstream and next to zero downstream, so try to maintain the attenuation no greater than -80dB to get a semblance of usable WiFi speed.