The EnGenius ECW220S is a part of the new security access points which make use of the full spectrum of features from AirGuard and, as its name suggests, it is a buffed up version of the ECW220 that we tested close to a year ago. The EnGenius ECW220S does look identical on the outside to the ECW220 and it does share the internal architecture and its components as well.

But it does comes with a dedicated radio for continuously scanning the AP’s environments and with a Bluetooth antenna to detect other Bluetooth devices. There are essentially two main elements that are the focus of the EnGenius ECW220S, there’s the improved system admin experience and the better wireless security. And both tie in with the aforementioned hardware additions. There is a live detection system for the client and access point behavior, which means that the system admins will find it easier to fix any issues remotely. 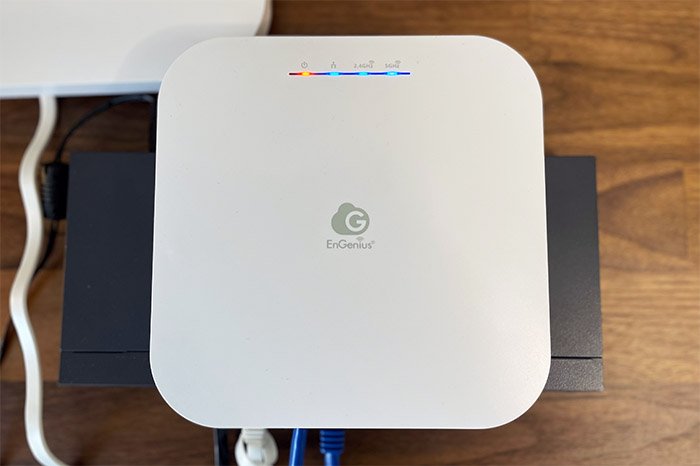 And there’s the scanning for potentially harmful devices (includes Rogue APs and RF jamming devices). Most of these features are available on the ECW220 and the ECW230 as well, but not those that are correlated to the scanning radios – the reason why EnGenius released a new series of APs. Other than that, all the cool WiFi 6 features that we saw on the EnGenius ECW220 are still here and the Cloud platform remains available, so let’s have a look at the ECW220S to see if the new features are worth it and whether they’re going to have an impact on the network performance.

I have praised the design of the ECW220 and the ECW230, so everything remains true for the EnGenius ECW220S as well. It’s a very compact WiFi 6 access point, despite its powerful hardware. And it does measures 6.3 x 6.3 x 1.3 inches, so its slim profile will help it easily blend in with the ceiling. This is a ceiling mount wireless access point, so you can’t leave it standing on a desk – you can, but it will easily fall off. There are mounting brackets inside the package to help you attach the EnGenius ECW220S to the ceiling, which is great.

Ubiquiti has left the impression that the wireless access point should run at a higher temperature and just not worry about it, but is that the case of the EnGenius ECW220S as well? The ECW220 did get a bit hot at the bottom, since the metallic section is used to draw out the heat from the internal components, so I suspected the same will happen with the EnGenius ECW220S as well.
Since I now have a thermal camera at hand (the AGM Glory Pro), I decided to check out how hot the enclosure actually gets and, as you can see, there are some points where the temperature gets a bit higher.

Will this cause any throttling? It doesn’t seem like that will be the case since it didn’t happen with the ECW220, nor the ECW230 either. The top section remains made of plastic and it’s covered by a white matte finish, while the bottom is made of a metallic alloy shaped to allow the mounting bracket and for the Ethernet and/or power cable to enter towards the dedicated section. This area is also identical to that on the ECW220, so, if you were expecting a 2.5GbE, well, it’s still only a 1Gbps LAN port available. There is still support for PoE+ and interestingly enough, I also got a PoE adapter in the box, but be aware that it’s not going to be present in the retail package, you will need to purchase one separately or simply use a PoE switch (since that’s pretty much the point of these Cloud wireless APs).

Besides the LAN port, there’s a Reset button and the DC 12V power adapter – no other cable in the box, so you will need to at least purchase a separate Ethernet cable. At the top, there is the same minimal array of LEDs showing the status of the Power connection (becomes solid orange once the device is paired to the Cloud), the LAN LED (flashes blue as data is being transmitted), the 2.4GHz and the 5GHz LEDs – all LEDs will flash when the firmware is updating.

It’s not that difficult to open up the case of the ECW220S (unlike the consumer-based router which seem guarded like gold) and all I had to do is to remove the four screws from the bottom of the EnGenius ECW220S. Afterwards, I could easily remove the top cover, but do be careful because you will immediately notice something new, there are two antennas that weren’t on the ECW220. 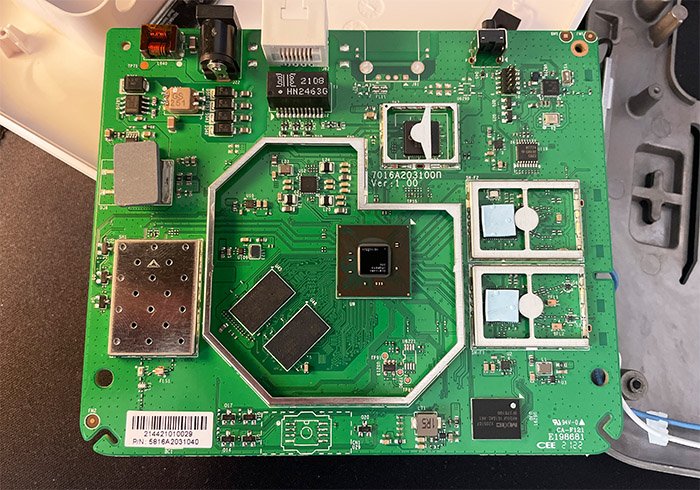 This part of the PCB doesn’t have any components that interest us, so I had to check the other side. There were two screws that needed to be removed to turn the board upside down and you can also disconnect the antennas. Doing so will show the first main component, the 128MB of flash storage from MXIC (X205107 MX30UF1G18AC-XKI).
Then, after removing the metallic covers, I could also identify the same quad-core 1GHz Qualcomm IPQ6010 that I saw on the ECW220, but the RAM was a different brand, although the same amount: 512MB from Samsung (2x SEC 134 K4B4G16) instead of Nanya. There’s also a Qualcomm QCA8072 dual-port LAN controller, a WT774 OAK G4 C627 4-bit dual-supply BUS and an MPSM44 MP549G IC.

This section is mainly focused towards the features that come with the WiFi 6 standard to improve the wireless performance and not security or software-wise feature (I will discuss these in separate sections). As expected, OFDMA is used with the EnGenius ECW220S to improve the data transfer with the clients: the channel bandwidth is divided into multiple resource units that are allocated to the clients, so the bandwidth is used far more efficiently than before, with the WiFi 5 standard. The Beamforming is a mandatory feature as well for focusing the signal towards the compatible clients and not broadcasting it everywhere. MU-MIMO is also supported, so there is the possibility to serve multiple clients at the same time if they have compatible WiFi adapter (and most don’t).

What’s interesting, although hardly surprising is that there is support for creating a mesh network using multiple wireless access points. This means that besides interconnecting more EnGenius APs under a single network, allowing for a seamless roaming experience (with 802.11r/k support) between the nodes, there is also the means to push the WiFi signal further towards areas that are hard to cover. Certainly, the access points can already be under the same network due to the Cloud platform, but the mesh abilities are a welcomed addition nevertheless.

I was wondering if these new additions to the ECW series would have an impact on the wireless performance of the access point, but it doesn’t seem to be the case, so I think that the heavy lifting is done at the Cloud level and perhaps there would be a more noticeable impact as the client devices start adding up. I obviously don’t have the means to check out how the EnGenius ECW220S behaves with 100+ client devices and, at the moment, I will run the usual set of tests as I did with other access points (such as the WAX650S and the ECW230). 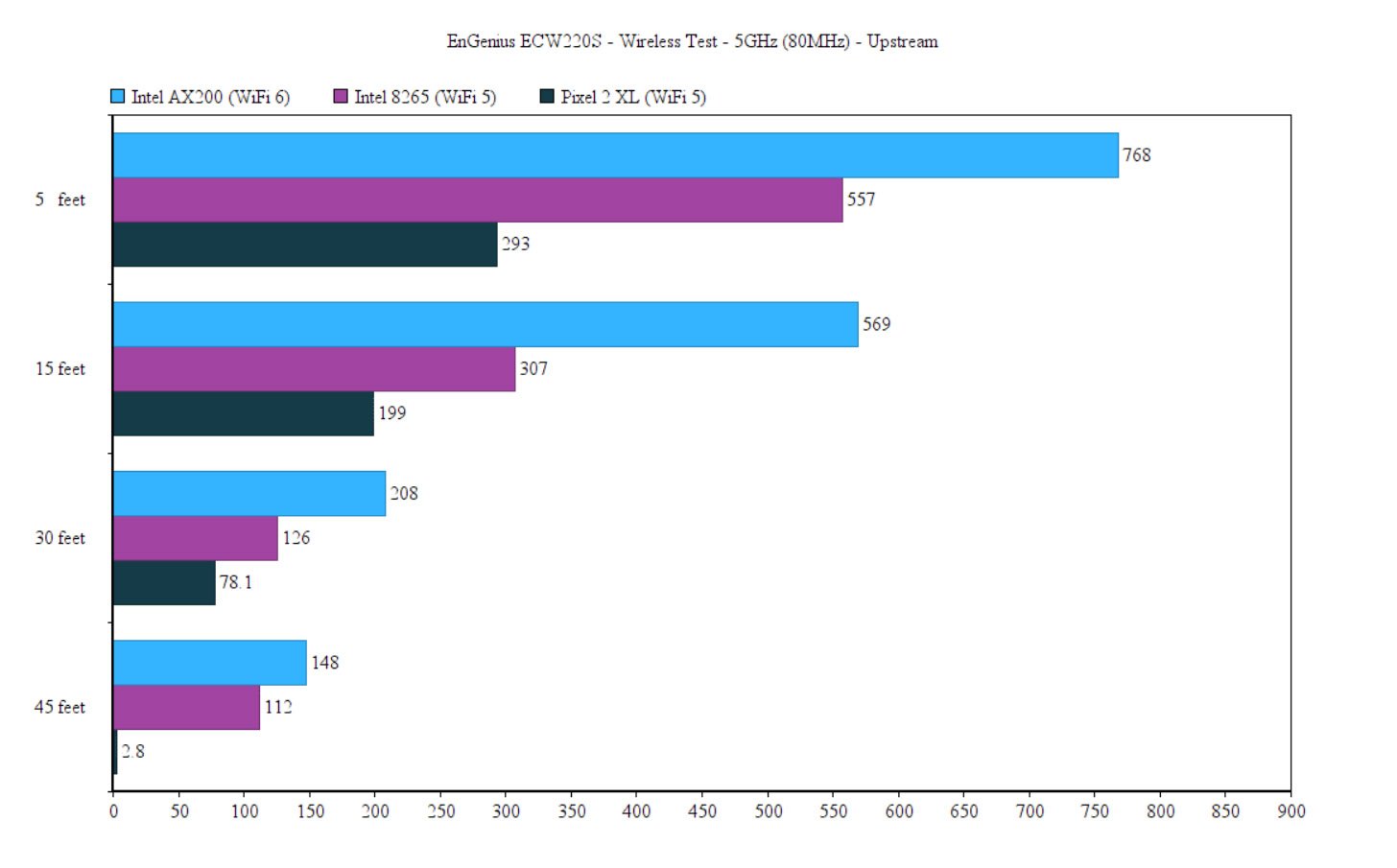 I tested the ECW220 in a different location and I had less interference with the EnGenius ECW220S at 15 feet, while all other areas mimicked the initial test locations with more fidelity. It’s worth noting that when the signal reached -86dB (somewhere close to 70 feet), the speed went down to 18.7Mbps – still usable, but only barely. Downstream, the performance was very similar to the ECW220, averaging 458Mbps at 5 feet and 93.4Mbps at 45 feet. The next client device used the WiFi 5 standard (equipped with an Intel 8265 adapter) and again, it was connected to the 5GHz network (80MHz). 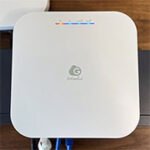