The TP-Link EAP610-Outdoor was developed to showcase the advantages of the WiFi 6 features in an outdoor setting and, while it may seem as a replacement to the CPE series (WiFi 5), I am more inclined to believe that it’s part of a potentially new series with a different goal in mind.

The idea behind the CPE access points was to push the signal over large distances in a single (or dual) direction, which is why the devices made use of some powerful antennas. The TP-Link EAP610-Outdoor is an omni-directional outdoor access point which means that the antenna gain is lower, but it does offer a better coverage to the area surrounding the device. And it may be tempting to believe that outdoors, there should be less interference, mostly due to the easily-achievable line of sight, but it does depend on where you live.

That’s because your neighbors WiFi will far easier make themselves present outdoors, than when you’re inside your house, which does block the intrusive signal (to a certain degree) using the external walls. That’s where the WiFi 6 features come to the rescue because they can minimize the impact of interference (OFDMA) which, as a natural consequence, can also potentially improve the throughput.

Additionally, the TP-Link EAP610-Outdoor is compatible with the Omada SDN, which means that it can be a part of a far larger network of devices (including remote monitoring and configuration). Besides the EnGenius EWS850AP, I haven’t really had the chance to test many WiFi 6 outdoors APs, so let’s put the TP-Link EAP610-Outdoor to the test and see what it has to offer.

The indoor wireless access points are usually a bit more refined in terms of design, easily fitting in on the ceiling, but the outdoor APs are not really designed with the aesthetics in mind. Instead, the idea is to be robust enough to handle outdoors conditions and to be easily mounted on a pole or wall. The TP-Link EAP610-Outdoor looks a bit better than the EnGenius EWS850AP since its antennas are internal and it does have the same white matte finish.

The device is entirely made of plastic and it has a narrow rectangular chassis which is characteristic for this type of access points. At the bottom of the TP-Link EAP610-Outdoor, there is a circular hole where you can insert the Ethernet cable and no other openings are present anywhere around the case.

So, how well is the heat management? The internal components aren’t really crammed together and the large heatsinks should be efficient enough at taking the heat away from the ICs. Sure, the case will get a bit warm, but no signs of overheating.

In terms of size, the TP-Link EAP610-Outdoor measures 11.0 x 4.2 x 2.2 inches (28.0 x 10.6 x 5.7 cm), so it’s a bit taller than the Mikrotik NetMetal ac2 and overall larger than the EnGenius EWS850AP. Not that it would matter that much when mounted outdoors, you just need to focus on achieving that important line of sight. As for the mounting process, TP-Link offers two options, one is by relying on the mounting bracket which gets attached to a wall (using the provided screws) – the TP-Link EAP610-Outdoor just slides into it.

Then, there’s the pole mounting option which simply requires the use of the two zip ties, so nothing too complicated. But I do admit that a metallic bracelet or at least some textile strap would have been better. I did look around the case to find the array of status LEDs, but it seems that TP-Link considered that one LED for all is the better approach. I disagree.

Anyway, on the front of the wireless access point, there is a single large LED which will be solid green when the AP is initialized and in working condition, but it will flash yellow when there is a system error (why not red?). When the LED is flashing green slowly, it means that the wireless access point is in an isolated state and quick flashing green means that the function to locate the device has been activated (was it really necessary for an outdoor AP?).

On the bottom of the TP-Link EAP610-Outdoor, you’ll be able to find the grounding terminal, the recessed Reset button and in the middle, there’s a circular opening which protrudes outwards which allows the insertion of an Ethernet cable (the port is Gigabit and it supports both the 802.3at PoE and Passive PoE). TP-Link has added a weatherproof sealing kit which makes sure that neither dust, nor water will enter towards the Ethernet port, and it gets rotated into place around the protruding circular area.

I do need to mention that the TP-Link EAP610-Outdoor is IP67-rated which means that the chassis is dustproof and it won’t allow water to enter, even if the device is practically submerged underwater. So, a powerful storm will not cause any damage, but a lightning strike might. Sure, there is 6KV lightning protection and 15KV EDS protection built-in, but it’s still better to make sure that the access point is not the only electronic (metallic) device out in the open.

Since there is no warranty seal, you can just go ahead an remove the eight screws from the rear side of the TP-Link EAP610-Outdoor, but do be aware that messing with any component will most likely lead to losing the warranty. That being said, after removing the screws and detaching the rear panel, I could see the seal that keeps the water and dust away, as well as the PCB with the large heatsinks.

Doing so will also reveal the metallic plate that comes in contact with the plastic case and with the PCB via thermal paste – I am very grateful that TP-Link didn’t use that dreadful glue-paste-thing again (as it did on the TL-ER7206). As for the WiFi, the TP-Link EAP610-Outdoor uses the Qualcomm QCN5022 802.11b/g/n/ax chip along with 2x Skyworks SKY85340-11 front-end modules for the 2.4GHz radio band and the Qualcomm QCN5052 802.11a/b/g/n/ac/ax chip along with 2x Qorvo QPF4588 integrated front-end modules for the 5GHz radio band.

Overall, it does seem to be a very similar configuration to the Xiaomi Mi AX1800 wireless router. In any case, I also need to mention that I could identify the version of the AP which was v1.0. I noticed that there is another version available, v1.20. So, what’s new from the v1.0? The only difference that I was able to find was in relation to the Cloud Access. The v1.2 supports Cloud Access directly through the Cloud-based controller, while it shouldn’t be supported on the v1.0.

Then again, the official website contradicts itself, showing compatibility on the v1.0 as well. They clearly changed something hardware-wise for the sake of compatibility, but figured out that the v1.0 will work as well?

It wouldn’t surprise me considering that neither TP-Link, nor Netgear are afraid to release almost the same device multiple times (at most with a different case).
Note: Inside the package, TP-Link has included a 48V PoE adapter which is a fairly rare addition (I’ve only seen one along the EnGenius EWS850AP and the Ubiquiti nanoHD).

The TP-Link EAP610-Outdoor is a WiFi 6 access point (AX1800 class), so it does make use of the main novelty features, such as the OFDMA which was developed to better handle denser networks. The entire reason for the WiFi 6 is to find new ways to tackle interference and provide a more stable network in both offices and at home.

But don’t think for a moment that the latter can’t be just as crowded as the former and in some cases even worse. At least in an office, a system admin adjusts the entire network, limiting the interference, while in a building everybody broadcasts their APs signal without taking into account the impact on nearby networks. The OFDMA does help a bit since it uses smaller resource units (RU) to carry data towards multiple clients at the same time, so there’s no need to wait their turn (that annoying co-channel interference).

Obviously, the client device does need to have a compatible network adapter and, it’s also important for the access point to have it implemented up and down, as well as on both radio bands. Considering the price tag, I assumed that we would get OFDMA on the 5GHz only, but it seems to be available on the 2.4GHz as well (at least there is the option in the Settings). The TP-Link EAP610-Outdoor is also relying on MU-MIMO to allow more than one client to be served at the same time, although you’ll hardly find any client device with a WiFi adapter above 2×2.

There is also support for Omada Mesh, but you do need to adopt the access point to the SDN to be able to take advantage of all its features. Similarly to most other wireless APs that can be integrated within a Cloud platform (or SDN), there is the possibility to create a mesh network with multiple access points, where the client should be able to move without experiencing any disconnections (from node to node). And there’s also the interesting ability of optimizing the paths towards far-away clients via multiple APs, as well as the self-healing ability, where in case a node (TP-Link access point) goes offline, the load it taken by a nearby AP, depending if it’s free or not to do so.

The TP-Link EAP610-Outdoor has a single Ethernet cable so, to check out the throughput that’s capable of outputting, I connected the access point to a PoE switch (also from TP-Link, the compact TL-SG2210P) and then I connected the switch to a router.

Next, I added a cabled device to the network (connected to the switch) and then I took two client devices, one a WiFi 6 device (AX200), while the other is a WiFi 5 laptop (Intel 8265). I know that this is an outdoor AP, but I still ran the same suite of tests indoors to have a point of reference with other APs, but don’t worry, I did test the TP-Link TL-SG2210P outdoors as well.

That being said, I did check the throughput upstream between the server and the WiFi 6 client device (80MHz channel width), and it was 718Mbps at 5 feet (the attenuation was -33dB). Moving to 30 feet, the throughput went down to 386Mbps up and 291Mbps downstream (-61dB attenuation), while at 45 feet, it still remained more than usable, at 234Mbps upstream and 113Mbps downstream.

Even further out, at about 65-70 feet, with the attenuation at -77dB, the throughput remained surprisingly strong at 162Mbps upstream and 73.4Mbps downstream. It shouldn’t really surprise though because the access point does have slightly more powerful antennas than the indoors-suitable APs and wireless routers. So it reaches farther more easily. This is a good thing outdoors, but not that great indoors, where you don’t want to overlap with your neighbors WiFi networks.

Moving to the WiFi 5 client device, I noticed that it didn’t like the strong signal that close to the AP, so, at 5 feet, it got overwhelmed and only maxed at 500Mbps up and 231Mbps downstream. Moving farther to 30 feet, we see that the throughput remains strong at 404Mbps upstream and 166Mbps downstream.

At 45 feet, it was strong upstream at 216Mbps, but it does show some weakness downstream since I only saw an average of 95.1Mbps (the attenuation was -71dB). Going close to 70feet, the throughput drops to 109Mbps upstream and to only 43.5Mbps downstream (-81dB signal attenuation).

These results highlight the performance in a fairly controlled environment, where the interference don’t radically shift from one moment to the other. Unlike outdoors, where passing cars will temporarily cut the throughput by more than half. Which is why it’s important to keep line of sight and to mount the TP-Link EAP610-Outdoor as high as possible. 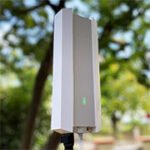