The Zyxel WAX630S is one of the new members of the Unified Pro WiFi 6 access points developed for SMB and enterprise use, and the device seems to be a more compact version of the WAX650S that I tested a couple of years ago, but are there other changes that go farther than skin-deep?

Since the Zyxel WAX630S costs less than the WAX650S (at the moment of writing), the manufacturer has chosen some slightly different components on the inside of the case (light downgrade in some departments, but I did see a rise to 1GB of RAM) and it does use a smart antenna. But, while the concept is the same, the smart antenna looks a bit different than what I saw on the WAX650S. Even so, its role remains to limit the channel interference and push for a cleaner and better performance without requiring the use of particular features enabled on the client side (such as the case of BeamForming or MU-MIMO). 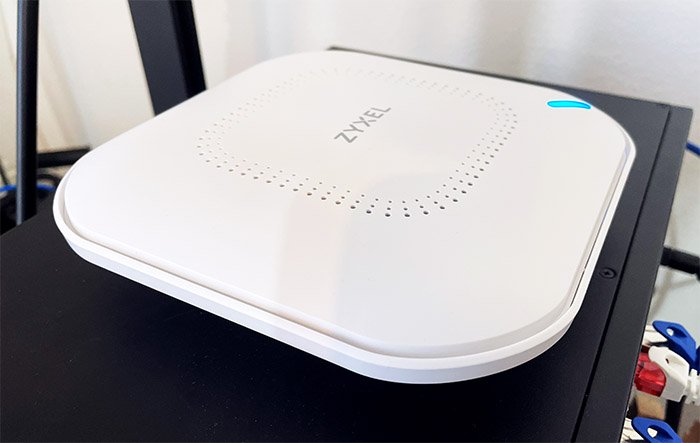 The 5Gbps port from the WAX650S has also been replaced by a 2.5GbE port which may seem more modest, but it’s still way above what a lot of networks are designed to handle, most still using a 1Gbps infrastructure. There’s also no need for PoE++ switches to tackle the full power of the AP, since the Zyxel WAX630S support PoE+. In terms of software, the wireless access point still has a very comprehensive interface that works locally and it will also work perfectly fine with the NCC platform. Of course, the mesh support to connect to other APs is available, so, without further ado, let’s put the Zyxel WAX630S to the test and see how it fares in comparison to the WAX650S and the other access points from the competition.

The Zyxel WAX650S is a large access point and it’s clear that the manufacturer wanted to see how far they could push the new WiFi 6 features without really trying to make the device compact. It would have ended up on the ceiling anyway, but EnGenius and Ubiquiti made their own WiFi 6 access points more compact, so I suppose the Zyxel WAX630S was built as a response to those devices. And indeed, the WAX630S measures only 8.98 x 8.5 x 2.48 inches, so it’s only a bit larger than the ECW220S and far more compact than the WAX650S. You can see that it’s still has a somewhat thick profile, but this made much more sense after opening the case and seeing all the necessary layers for keeping the internal temperature in check and for allowing the smart antenna to do its thing. 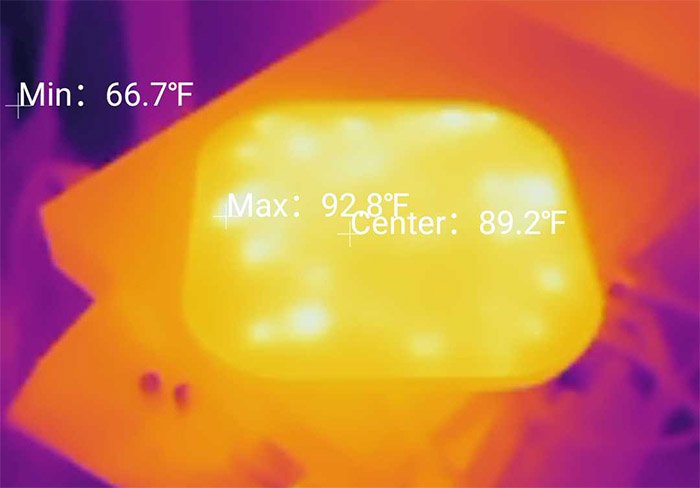 As I mentioned in the intro, the case is made entirely out of plastic, but it doesn’t really feel like it due to the weight of the device (1.69lbs). And that’s because immediately after the plastic, there is a metallic plate that takes the heat away from the processor and other components and it pushes outwards. It’s worth noting that between the PCB and the antenna section, there is another metallic plate which is the anti-noise spreader. It seems that the Zyxel WAX630S keeps the temperature even lower than the WAX650S (which also didn’t really have issues with the temperature management) and I could only feel some warm spots near the ports.

So yes, the heat management is excellent. At the top of the case, Zyxel kept everything simple and with a minimalist tone, so there’s only the logo and the LED that sits on the side. And it seems to be identical to the one on the WAX650, so, if it annoys you, it’s very easy to disable it. The LED will flash amber and green while it’s waiting to be paired to the NCC or while it’s booting, and it will become solid green as soon as the device is ready to use, with the wireless interface already activated. In case it becomes solid red, then the Zyxel WAX630S is most likely experiencing a system failure – slow flashing red suggests that the Uplink interface is down and fast red flashing means that the AP is upgrading its firmware. 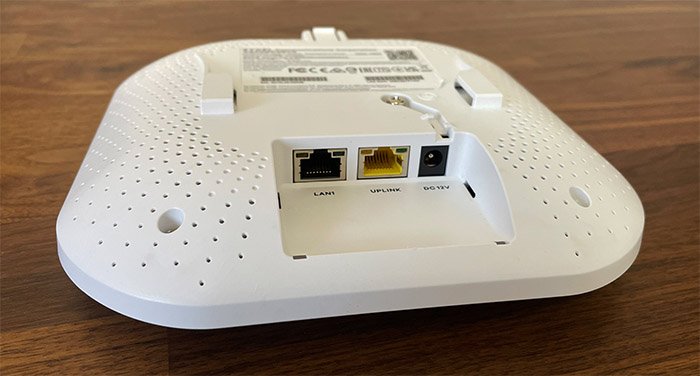 If you turn the WAX630S upside down, you’ll notice that there are no feet, so this is a device that needs to be mounted on the wall or ceiling and there are some dedicated areas where you need to insert the bracket. Of course, the bracket is provided in the package, but there is no PoE adapter, nor any cable. There is a transparent cover which should keep some dust out of the device – it’s not a protection against rain. I did like that Zyxel has kept the two Ethernet ports since the secondary 1Gbps can be useful for connecting client devices in case the AP sits on the wall. The Uplink port is 2.5GbE and there’s the DC 12V port in case you want to power up the device from a wall socket.

Yes, the 2.5GbE port is a downgrade from the 5GbE of the WAX650S, but then again, it should still be enough for the large majority of SMBs and even for some enterprise clients. If you need more, the WAX650S is still available and the XS19209-12HP is ready to keep it at peak performance. Next to these two Ethernet ports, there is an almost hidden console port (for diagnostics purposes) and the manufacturer has also included a Reset button which is a bit easy to miss since it’s within the many punctured holes around the bottom of the case.

I haven’t found any seal that may void the warranty, but I would still take into account that it may happen if you decided to proceed with the teardown process. In any case, in order to see what’s inside the Zyxel WAX630S and to better understand the differences between it and the WAX650S, I removed the screws from the bottom of the AP.

Then, I was able to detach the top part and, similarly to the WAX650S, there is a metallic section attached to the plastic cover. The idea is to take the heat from the components and dissipate it to the metallic shell and, to not make the device too hot to the touch, so the plastic prevents it. After that, I was able to identify the main components, from which there’s the quad-core Qualcomm IPQ8071A SoC (ARM Cortex A53 clocked at 1GHz) which is quite a bit below the IPQ8072A of the WAX650S that was clocked at 2GHz. 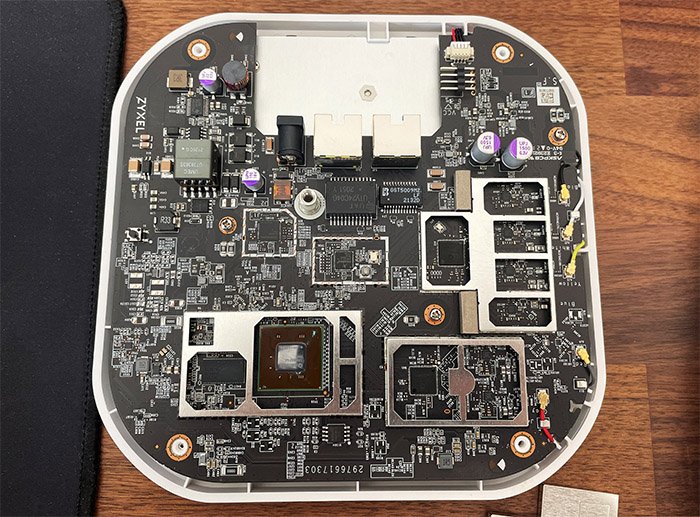 After going deeper into the device, I reached the antenna and it does differ quite a bit from what I saw on the WAX650S, even though the concept seems to be very similar. But we’ll put the AP to the test and see how it performs.

One of the highlighted features of the Zyxel WAX630S is the smart antenna technology which seems to work in a similar manner to the Beamforming, but it does not require any type of effort from the client, so no dedicated compatible hardware is needed. The smart antenna scans the environment for the connected clients and to get a good idea about the type of interference is in the area and then it creates personalized patterns for each client device, so that it receives the best possible signal. The number of possible combinations is 700 and Zyxel says that the pattern adjustment for each client is done very quickly. And it’s true that I experienced no issues with the WAX650S, but the WAX630S is a bit different in terms of internal hardware.

The few client devices (three computers and two mobile phones) that I can connect to the access point seemed to have no issues (especially when using NCC), but I can’t vouch for a larger site. Besides the smart antenna, there’s the WiFi 6 features, such as the OFDMA that is supported both upstream and downstream. 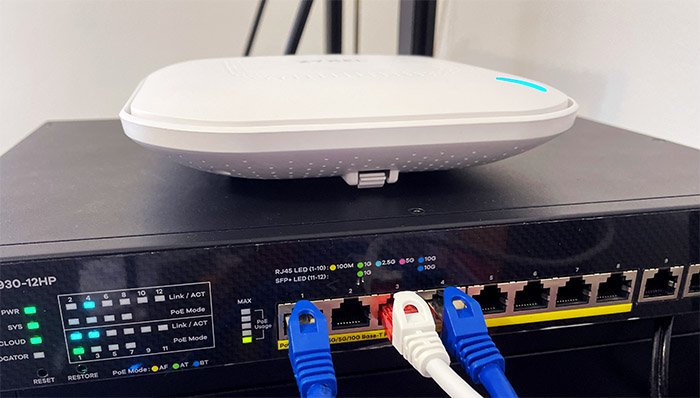 And there’s also the MU-MIMO which should be able to serve multiple clients at the same time, but there’s of course a limit to the amount that the chip can handle, as seen in the previous section. The mesh technology is becoming the norm with the wireless access points which is great if you have more APs around and want all of them to inter-communicate and create a single network. This way, you should experience a seamless roaming experience on a far larger site, moving from one AP to the other. And yes, the WAX630S will work alongside WAX650S. I also need to mention that Zyxel had kept the support for the 160MHz channel bandwidth, something that neither ECW220S, nor the TP-Link EAP660 HD had. Then again, I feel like the ECW230 is a more suitable competitor to the Zyxel WAX630S than the ECW220 or the ECW220S.

To test the Zyxel WAX630S, I needed some particular equipment that I have slowly managed to acquire over the last year. The first is a computer that actually has a multi-Gigabit port which will act as the server (the port is 2.5GbE) and to which I will connect the AP via an Ethernet cable.

Then, the client devices are from the WiFi 6 and the WiFi 5 standard. So, after connecting the WiFi 6 client device (Intel AX200 WiFi adapter) to the 5GHz network (160MHz channel bandwidth), I made sure that the connection to the server was indeed at 2,500Mbps which was confirmed by both Windows OS and the Zyxel switch that I was using to power on the access point (XS1930-12HP). Then, I looked up the link speed on the client side and it showed almost 2Gbps, which is excellent at 5 feet. And I started the test which showed that the values don’t really go past 1Gbps, despite my wild expectations. It’s still very good, averaging at 890Mbps upstream and then slowly dropping the farther I would go. So, at 30 feet, I saw an average of 324Mbps, but then, at 45 feet, things got weird.

The test at 45 feet almost gave me an aneurysm because I just couldn’t understand why the speed would drop, while the signal stayed strong, even stronger than at 30 feet, it just didn’t make sense. And then I looked at the details of the WiFi connection on the client device which said that despite being connected to the 5GHz SSID, it still switched to the 2.4GHz one, hence the good signal, but less impressive throughput. I have little idea why that happened, but I completely shut down the 2.4GHz network to be able to complete the test.

I assume it has to do with the smart antenna which moves to the 2.4GHz radio if it thinks that the signal on the 5GHz is less reliable. Considering that I didn’t enable any band steering, it really took me off guard – be aware that I was not connected to the Cloud yet and it doesn’t seem to happen with the NCC. 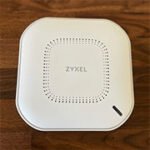